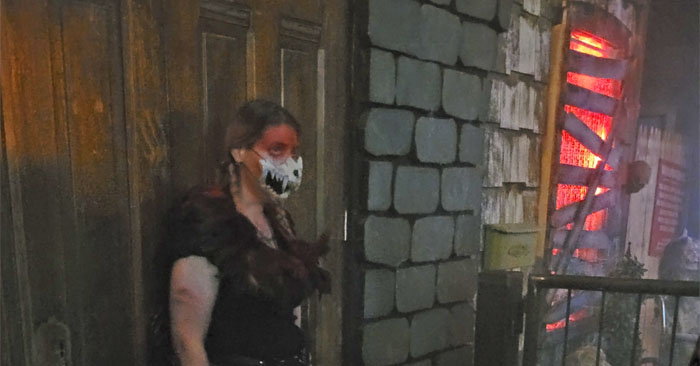 There are no signs from the main street, so our group followed GPS.
Once in the shopping center, we saw flashing lights on top of the building and right below a white sign with "Twisted Crypt'' on it. There was a black hearse parked in front.

The beginning of the Twisted Crypt line starts under the shopping center awning. While waiting, they wanded us down with metal detectors (so please leave any weapons of any kind in your car) and gave us some basic rules. After being wanded down, a character who looked like a Sheriff led us into the building to buy our tickets and wait in another, very detailed queue line to enter the haunt. This queue line was complete with a large, dead tree in the center of the room, an occasional lightning strike (complete with thunder!) coming from the ticket shack, a projection screen playing clips of old horror movies on one wall, and multiple facades depicting different scenes/ rooms- just like you are already walking through the haunted house!

While waiting, we only saw one character (dressed like a broken porcelain doll), going between a hidden door in the wall and the Fast Pass entrance. She was very funny to watch interact with the crowd as she made her surprise appearances through that door!

My group paid for General Admission tickets- which the wait on this night took an hour and 20 minutes. The length of the actual attraction (once we started our walk through) was timed at 18 minutes. Don't let this deter you however as this show is worth the wait!

This show does an amazing job with "crowd control." They spaced the groups out so well, the characters were able to spend a small amount of time interacting with us, but yet we never ran into another group!

Our tour of Twisted Crypt began with a creepy voodoo-like character waving her hand and "magically" causing the entrance doors to open on their own. Our group was then ushered into a room that looked like an old den with a fireplace and a large tv screen on one wall as the voodoo character shut the doors behind us. The lights then went pitch black and when they came back on, suddenly a pig character had joined us in the room and was pointing at us to watch the video scene now playing on the TV screen in front of us. We watched as a crazy doctor/ scientist informed our group of the horror awaiting ahead of us and advised us that only one of us would be accepted into "The Family." The room went dark again and this time a red blinding light appeared where the wall with the TV had once been, and the pig character directed us to move forward down the hallway now in front of us. We came upon a disgustingly dirty kitchen with a character in a 1950's red dress (going by the name Maria) who spoke in tongues while thrusting her moldy food trays at us. This character did a phenomenal job making our group feel comfortable, only to suddenly make us extremely uncomfortable when she got upset and threw her moldy food tray at the wall- creating a loud, startling bang and surprising us! Once Maria decided she had enough of us as her unwelcome dinner guests, she revealed the exit, preventing us from becoming her next entree. We came upon 3 crazy Hillbilly's, who sized us up (in a slightly unorthodox manner) to determine which of our group would be "part of the family." They toyed with us for a while, made their decision, then led us onward. Eventually, we came to a cage maze, which held a crazy clown who heckled us to find our way out. This led into a scene with multiple doors, and the character here (who looked like a little girl) asked us to choose one. As we were deciding, another door (that we didn't see) opened, and a larger character attempted to startle us. He just so happened to be hiding behind the door we needed, so we continued along where in a laundry room scene, 2 arguing sisters were bantering back-and-forth over soup! One spoke in tongues, while the other one translated what her sister was saying. The smell in this scene was horrible (like dirty laundry) and fit very well. At the end of the Haunt, as we exited a spinning tunnel, we were left catching our breath as we were finally introduced to the Head of Household: Big Papa and his "friend."

Overall, our group was happy to say we survived Twisted Crypt!

To find out more about this event, visit:
https://www.twistedcrypt.com/