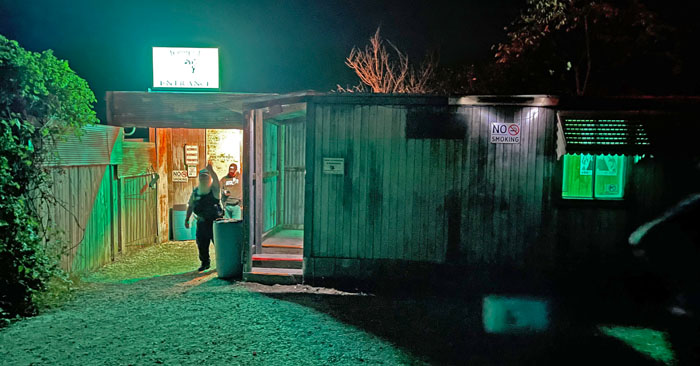 Torment at Twelve Hundred is located off of a country road. They had a flashing sign with an arrow directing people on where to turn in, as well as a large banner with the name of the attraction. Visitors use the same one lane road in and out of the haunt. In the parking lot, there were multiple people directing traffic to the nearest parking spots.

The waiting line to purchase tickets was partially covered and featured hanging green lights and spooky music. There was an evil bunny in one corner of the line, but otherwise no other actors until after you purchased a ticket. Once I bought my ticket, there was another very short line to wait in to get into the haunt. In this line, an actor named Rufus wandered up and down the line, talking to guests and asking them to be friends.

I encountered serious problems regarding crowd control at this attraction. At one point, an actor scared the group ahead of us with a chainsaw. Instead of scaring them through the door to the next room, he scared them backwards towards a long line of other people. After the commotion was sorted out, we were in a group of at least 30 people. We stood to the side and let everyone go by so that we could continue.

Every couple of minutes another group or two would come up behind us. We kept letting them go around to avoid another massive group pile up like before. In another instance, we were with a few other groups and there were two ways to go-left towards a light or right down a path. An actor came out of the door with a light, so part of our giant group started walking down the trail to the right thinking that the lit door was an actor room. They were halfway down the path before the actor chased them back the other way. Occurrences like this also contributed to the crowd control problems.

I started out going into a room with around 20 other people. We watched a homemade YouTube video. After it ended, I didn't understand the importance of the video so I shrugged it off. After the haunt, I found out that we watched Part Two of a video and we were supposed to watch Part One on Youtube prior to coming to the attraction. I wish they would have mentioned this to us when we bought our tickets so that we could have watched the movie in line and understood the significance of it.

After the video, we lined up again and an actor let us into the haunt by group. We entered a mine and walked up and down passageways that made me feel like I was actually inside of a real mine. I enjoyed the authenticity of the sets. In one room, there were giant rocks and fallen beams making it look like the mine had collapsed. I loved the green taaffeite rocks that lit this room. An actor jumped out at us when we turned the corner around a large rock which made most of our group jump.

There were multiple areas where we had to crouch down to continue through the haunt. My favorite time that this happened, I had to step down into a long, dark, metal tunnel and stay crouched down until the end of the tunnel. Speaking of steps, this haunt had more steps than any other haunt I have ever been to. For those guests who arrived with high heels or open-toed shoes, rental shoes were available for an additional fee.

We walked through three different school busses-all of which had actors ready to scare. In one of the busses, a girl was laying down and sat up when we went by. She didn't scream or hell-she didn't need to. She looked just like the other props and I never would have guessed she was a real person. I later went into a room with a bunch of animatronics. One that stood out was a dog that came out of the wall. It slammed its feet on the ground and made loud noises. Another was an old lady bouncing up and down surrounded by darkness. As I got closer, the lights turned on and we were surprised by something we didn't expect. This scare got the hair on the back of my neck to raise.

At the end of the haunt, we entered into a large concession room where they were selling drinks, snacks and even homemade brownies. One member of my group ordered a bottle of water, but they were unable to break a $20 bill so they gave her the bottle for free. Next to the concession stand, there were a few pieces of clothing available for purchase. We were out by the main road when we came out of the building and had to walk down a long path back to the parking lot.


To find out more about this event, visit:
http://www.tormentwelve.com/