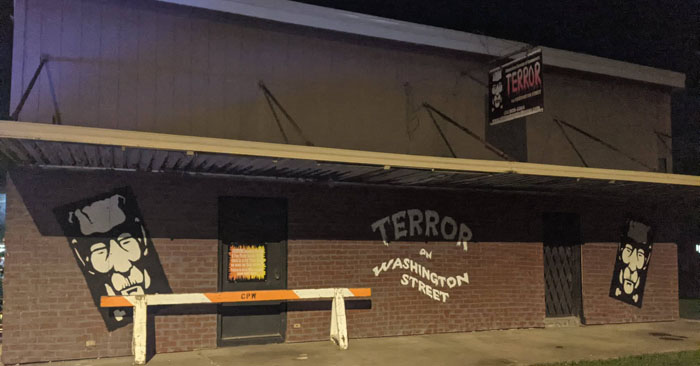 We noticed that there were several characters walking through the crowd and scaring patrons waiting in line. We also saw that concessions were available for guests that may want a snack.

We did not run into any groups, but a group caught up with us just within the last few seconds of our walk. The set up of their intro room seems to set them up for success in keeping groups separate because we didn't even hear another group while walking through most of the house, despite seeing groups go in before us.

Immediately upon entry, we were stopped by a ghostly host who read off the rules to us. I thoroughly enjoy the execution of the rules at this attraction; it is unique and entertaining. After we got the okay to proceed, a door creaked open eerily and we walked through. Almost instantly, we were followed and startled by a monster hiding in the shadows.

We walked into a demonic bedroom, a library, and a hallway full of eerie portraits. While the sounds of a creepy organ played in the background, we were stopped at a very menacing door. When it was safe, the door opened and we found a staircase which led down into an old, creepy basement. At the bottom, we found caged creatures who growled at us as we passed by. A familiar horror movie character greeted himself, and a large rat made an appearance from out of the wall. In the next room, a performer gave a great performance as a spider in a way I've never seen done and it really made me shriek. We had to crawl in order to proceed to the next area that was filled with hooded characters.

We found a scene with monstrous animals behind cages, and a crematorium which led to walls filled with skeletal remains. We passed through a radioactive area with glowing barrels and moving barrels. There was a vampire area and a glowing swamp wherein we had to go over a bridge and by decapitated heads on spikes. Shortly after this, we came into a tunnel that was like nothing I'd ever seen before. The scare actor in this spot did a great job of sneaking up and scaring me. We found a clown room where a couple of clowns eerily watched us pass by. We passed by a scarecrow and a great hiding spot for a scare actor. After passing through a dark maze, we found a pretty house façade where the final scare of our tour got us.

Terror on Washington Street put on a good show this year! Their style is old-school haunted house with a few newer special effects and props in the mix. The basement gives off a natural creepy vibe, and the actors were great at staying in character. So many performers really got me startled because they were completely silent and still as I approached them. If you're near Clinton, I would absolutely recommend seeing this show before the season is over!


To find out more about this event, visit:
http://clintonhauntedhouse.com