2021 Terror In The Timbers Review 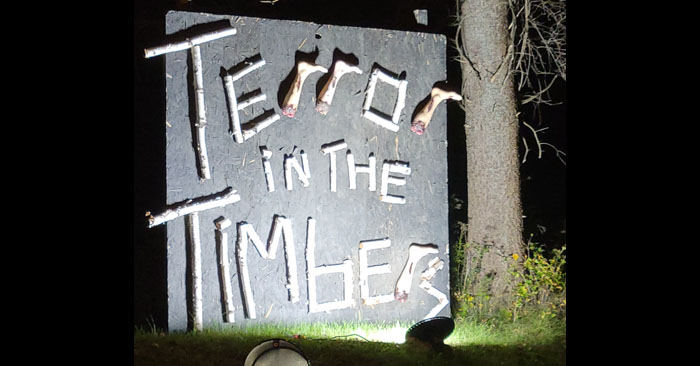 I used GPS to find the location, but it wouldn't be hard to miss as there is a huge, lighted sign from the road.

There is no parking necessary since it's a drive through Haunted Attraction.

(Side note: new this year is a Haunted Trail, but unfortunately my group arrived too late in the evening to check it out this night. Parking for this appeared to be directly after finishing the drive through, and seemed relatively large.)

While waiting in the queue line of cars to enter the attraction, fire performers danced around with different fire toys in the center of a small clearing. We had also been advised by the attendee when we purchased our ticket upon arrival to tune our car radio to 97.7 FM for "creepy music" to get us in the right mood.

$65/ per car to drive through the Haunted Trail

Being that this is a drive through experience, "crowd control" is expectedly different from a normal Haunted House setting. As part of the rules, we were advised to drive no faster than 5mph, and for certain scenes we were to follow a (red/ green) color- coded light scheme that would change based on when we should stop or go. It created (for lack of a better way to put it) a downtown- Chicago, rush hour traffic jam. But, this did give safety to the actors and other drivers.

This show is very unique, as you stay in the comfort of your car the entire time! That being said, this can cause the experience for the driver of each vehicle to vary slightly from the passengers as the driver has to focus on the path and vehicles in front of them.

Prior to entering, we had been advised to turn our headlights off (once we reached the torch- lit trail), and leave our car windows up (but cracked). Once we reached the trail however, we realized all the fun was to be had with the windows (at least halfway) down!

The trail was comprised of generic horror scenes, spread a small distance apart, along a driving trail through the woods. One of the first scenes was a graveyard, where a grave digger reached in at us through the car windows and cracked jokes that he would take my passengers off my hands and bury them alive if I wanted.

From there we moved into a medical scene, where a couple deranged patients attempted to get INTO the car with us (thankfully we had our doors locked)!

We drove through a castle scene, where a screaming victim on one side of the car distracted us so a vampire could attack from the other side. A ghostly lake scene, with some ghost- like characters roaming aimlessly between the cars. Special mention to the husband/ wife zombie duo hanging out in front of what appeared to be their house(?). The husband made friends (through a series of grunts) with a passenger in my vehicle, and even went so far as to produce a glow stick in acknowledgment of the newfound friendship.

At the very end of our drive- through experience, we did find out the hard way why they suggest leaving your car windows closed. I don't want to ruin the surprise, so I'll just say I know my windshield wipers are functional.

Overall, I would say this attraction is a great, family- friendly, fun experience! (But make sure to use the bathroom before pulling in!)


To find out more about this event, visit:
http://www.TerrorInTheTimbers.com