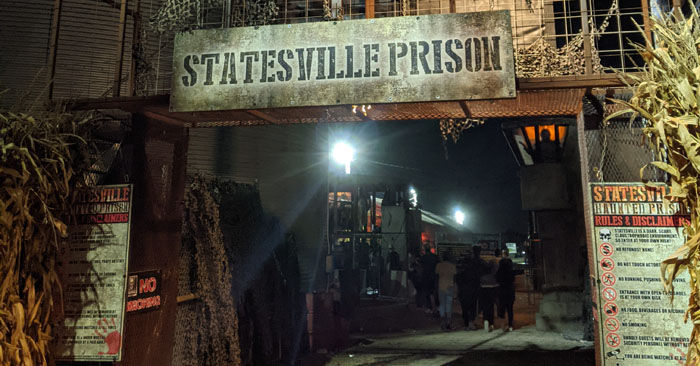 We followed the directions that GPS provided, and we found signs for the farm that Statesville is located on, as well as a lit up covered wagon with a Statesville banner on it. We followed the flow of traffic onto the property and were directed by multiple parking attendants. There was plenty of parking and it seemed that the walk to the entrance wouldn't have been too long no matter where you parked.

After we parked, we did struggle to find signs that told us where to go to buy tickets and/or redeem tickets that we had purchased online. There were two long lines, and one member of our group had to walk up to the front to ask what the lines were for while the remainder of the group held our spot just in case. We finally figured out where we needed to be with the tickets that we had already purchased online and we had them scanned at the ticket booth.

Beyond that point, we were able to follow the signs on the property to the location of Statesville.

While we were waiting for our turn to enter the attraction, we saw multiple characters interacting with the crowd. There were a few staple characters for Statesville; such as Fluffy and Sharky. We did see a couple more clowns and guard-like characters. There was music playing for guests while they waited outside under the shelter of a large canopy.

Our group did not catch up to any groups while walking through the attraction, nor did anyone catch up to us. There is a holding cell of sorts almost half way through the show where they can space out groups again, which seemed to work well.

This was my first visit to the legendary Statesville Haunted Prison, so I was beyond excited to see the show (especially since they're advertising that it is their last year). We were graced with the presence of the Warden during the introduction. Again, I had heard about the introduction to Statesville from multiple people over the span of many years, and it was very cool to experience it firsthand.

Upon entry into the haunt itself, we quickly found the actors hiding in unconventional places. We walked through prison bathrooms and showers while we could hear menacing alarms sounding off in the distance. There were very pretty industrial sets featuring water pouring from ceiling pipes into barrels, fog coming through vents, and guts hanging from the ceiling near what looked like a large meat grinder. There were places where the floor was not level, which helped facilitate a sense of vertigo. There was a foggy swamp area, but the fog was dissipating when we walked through and we did catch a glimpse of a backpack on the floor through the fog.

After a brief pause in a holding cell, we continued on to find what looked like jail cells filled with bunk beds and prisoners. There were bodies hanging off of the bars, and multiple characters in masks similar to gas masks. There was a short mirror maze with creepy kids, and places where we needed to duck down to continue. We found what looked like the psych ward where mental patients had taken over the space, and then a medical area that may have been used for experiments because mutants had the run of the place.

We finally found the famous red and white checkered clown scene at Statesville, and one of the clowns was successful in scaring a member of my group. As we were exiting the attraction, we were chased down by murderous characters through a tunnel. We continued walking straight out of the exit and walked past what looked like an abandoned shack. I didn't know until afterwards that we had walked by the previous façade for City of the Dead, which has been part of the Statesville experience, but is not in operation this year. I was even more disappointed after I did some research and found that the price for admission this year was the same price when both attractions were last operational in 2019 (Statesville's most recent year open).

In conclusion, I am thankful that I was able to see the legend that is Statesville Haunted Prison before it leaves. It is easy to see how it became the haunted attraction that most people in Chicagoland (and beyond) have heard of and hold to a high standard. With that being said, after two decades of only hearing about how over the top scary and intense Statesville is, I was slightly underwhelmed. While the scenes were interesting and most of the performers were high energy, the shortness of the walk through and the lack of half of their typical show despite charging "full price" left a mark. By all means, visit Statesville if you haven't seen it yet and/or you want to experience it before it's gone, but anticipate paying full price for less than what they have provided in the past.

To find out more about this event, visit:
https://www.StatesvilleHauntedPrison.com/