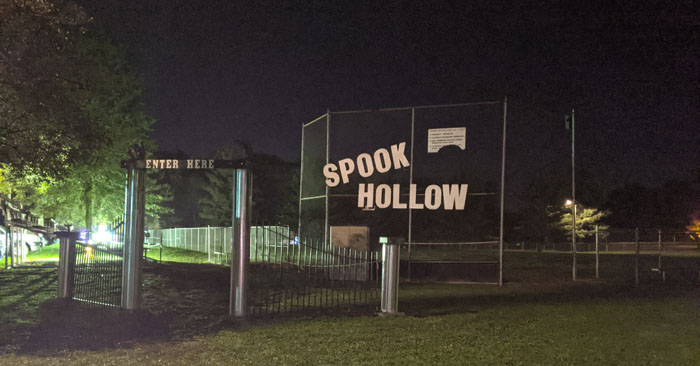 We saw a large backlit arrow sign displayed at the closest main intersection, and followed the arrow. Spook Hollow is located on a public park, and the name of the attraction is attached to a backstop on a baseball field near the street. There was a large parking lot available, as well as street parking. There were also signs and roped off paths that led us to the entrance of the attraction. There is a significant amount of walking that needs to be done between parking and the entrance to the event.

We arrived pretty late in the night and the line wasn't too bad. We did see a tall scarecrow with glowing red eyes walking through the wait area. There was music playing, as well as horror movies clips playing on a projection screen while we waited.

We ran into several groups inside of all three attractions, and some groups caught up to us, as well. It was their opening night, so they may get better at spacing groups out as the month progresses.

After the walk between the parking lot and the entrance, we found where they were separating groups between their fast pass and general admission tickets. We had fast pass tickets, so we passed a few people that were waiting to get into the sheltered waiting space. Once inside, the fast pass was corralled in with the general admission crowd about half way through the sheltered wait area. With that being said, if you are one of the people like us in that you visit several shows in a night, arrive very early or place Spook Hollow at the end of your night because there is a significant portion of the line where fast pass isn't separated. There are fast pass lanes at all of the remaining attractions, which is really convenient at those entrances.

When it was our turn, we walked through the front door of the elaborate mansion façade. Within this mansion, we saw several highly detailed rooms; such as an entryway, a living room, a very intimidating hallway, a library, a foyer with a two-story staircase, bedrooms, a bathroom, a dining room, and a hidden room where I can only assume the rich man who built the mansion kept his treasures from Egypt. There were more detailed rooms that really made it feel like we were walking through an eccentric rich man's mansion. There were a lot of loud sound effects inside; like booming thunder and the growls that the animatronics were giving off. This mansion themed attraction is incredible to walk through.

The next portion of our visit was spent on an outdoor path through some wooded area with lanterns lighting the way. This area is pretty hilly, so make sure you wear the right shoes for walking. We passed by several scenes which included catacombs, a cemetery that was full of headstones, a church with stained glass windows, and a miner's shack that had unique lighting figures outside. Along the way, we walked through smaller buildings that had scenes and/or mazes inside, and in some places, we had to duck down to get through. We found a shack with creatures hanging out on the front porch, which led us to a green laser swamp maze, which was full of actors. We eventually walked through a carnival midway scene, which was very pretty and full of characters. A couple of the performers in this scene did a great job and had great characters, and some of them stood still and watched us walk by. The outdoor portion of this attraction is very long and the scenes are impressive. There are spooky sounds that fit the scenery throughout the walk, and there were a few performers with excellent character creation and great execution with their costumes and accents located here.

We approached the final attraction, which boosts an impressive industrial building façade which is lit up beautifully with different colored lights. Guests were being sent into this attraction one by one while we were there. I walked into the front door and found convincing scenery that made me feel like I was in a haunted factory. Barrels, ladders, machinery, steel walls, a large fan, and saw blade sound effects gave off an industrial vibe. As I continued, I found a hallway full of zombies, a science lab, and a medical area with a morgue. We walked through a locker room and a bathroom. There were dark hallways and nooks in the maze that held animatronics. There seemed to be a shortage of actors in this last attraction.

Overall, I enjoyed my walk through Spook Hollow this year. A lot of their scenes are very detailed, lit appropriately, and topped off with the perfect sound effects. There seemed to be a shortage of actors when we walked through, but that could have been because we were there right about when they were closing for the night. I think some of the places that had an overabundance of performers could have spared a couple, and they could have been sent to other places throughout the attraction because it was noticeable to me that some places had no performers and some had too many. All of the actors and actresses that we saw were dressed in appropriate costumes for their scenes, and their make up was done well. There seemed to be more animatronics and less actors than I remember from my last visit, but overall, it was still a great show this year.

To find out more about this event, visit:
http://www.spook-hollow.com/