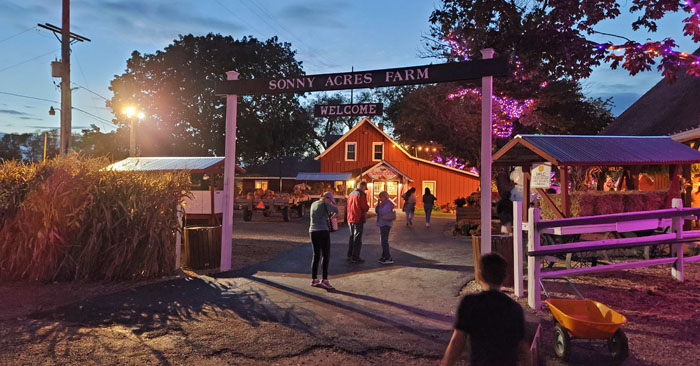 They do offer ample parking, however later in the night and later in the season this will quickly become limited.

There was proper signage that was visible from the road, however not much to indicate that they have a haunted house/Haunted Hayride.

This location offers a variety of prices, you can buy a ticket to attractions individually or buy a combo ticket for both of them. It should be noted that ticket sales are only onsite and cash only. They do not offer any online ticket sales and do not list prices online

They do have ATMs on site.

This location has two attractions

Crowd control for these attractions was sufficient. Groups were adequately spaced.

Locating Sonny Acres farm was relatively easy to find, our GPS led us directly to the location without any issues. We were able to identify the location due to the large, lit up ferris wheel and carnival rides.

On the opposite side of this they do have a large parking lot with a Sonny Acres sign, this sign did not have a ton of light shined on it. However it was still relatively easy to see from the street.

Once we arrived we found that they were quite busy and there was ample parking at the time of our visit. This lot will absolutely fill up later in the season. I would plan accordingly when you visit. Parking is free.

After we found our parking spot we ventured into the farm to try and find where to purchase Haunted House Tickets. You can roam around on the property for free, there is no ticket booth at the entrance, so this made things a little difficult to locate where we buy tickets. We spent a good 10 minutes walking around looking for the ticket booth near the two locations, it wasn't until we asked someone that we found the correct ticket booth. The reason it was difficult to locate is because it did not really advertise that they were selling Haunted Barn and Haunted hayride tickets. Signage was minimal at best.

Tickets for this event are only sold onsite and are cash only. They do have ATMs on site, however we did not use them.

There are two separate attractions at this location, They have a Haunted Hayride and a Haunted Barn. Tickets for both can be purchased separately or bought in one combo pass.

Tickets for the hayride are timed, this way you are not needing to wait in line for an excessive amount of time.

After we got our tickets we rushed over to the hayride as our ticket time was very close to the current time. We found that there really wasn't any signage indicating where the hayride was or any information from the ticket booth on where to go.

When we got over to the attractions line, we found that there wasn't anyone in line, however people were being immediately loaded into the hayride. We proceeded by handing off our tickets to the attendant and got onto the hayride.

Once on the hayride we waited around 15 Minutes until we began moving. They do sufficiently space the tractors to eliminate any crowd control issues.

The hayride was very well put together, it offered a wide variety of scenes and had a few actors running around interacting with guests as they passed by.

The hayride began by passing by a massive Halloween tree covered in purple lights and glowing jack-o-lanterns, this was a pretty impressive entrance.

The ride continued by a lake with some cars sunk into it, through a Drive in theater where there were not any actors, however they did have everything themed out and audio/video playing.

As we continued on we started to get into areas a little more heavily populated with actors, props and animatronics. We went through a large cornfield scene with scarecrows and matching actors surrounding the tractor. This continued into giant spider webs complete with actors and animatronic spiders, a toxic waste area and a town called Pleasantville.

Each area we continued through was appropriately decorated to match its theme, each area also offered some actors that we also themed to match.

This hayride was really well put together. They offer a wide variety of scenes and they use of a lot of fun props and animatronics to provide hayride level scares. There were actors who would run alongside the trailer and even awesome flame effects shooting fireballs into the air.

This ride doesn't really have a really intense scare factor to it, I would say this definitely is lower on that spectrum and is absolutely family friendly.

This hayride lasted around 14 minutes total.

Overall I would say this hayride was very well put together, while we were not really scared, but groups of younger kids were at times, it was a lot of fun and definitely a family friendly haunted attraction offering low end scares from a seated ride. The trailers were not tightly packed with people and there was sufficient room to sit comfortably. This might change on busier nights, however we were quite comfortable sitting on the bench watching the show go by.

Once we got off of the hayride we saw that the entrance line had grown considerably. This one will absolutely be busier later in the season.

From here we continued over to the haunted barn. This haunted barn again did not really have a lot of signage to identify the entrance and didn't have anything in terms of a queue line waiting area. We walked around the barn until someone came outside and we asked if we were in the correct location. Fortunately we were and we had a short two minutes wait to enter the attraction.

When we got inside we were instructed to wait and listen to the rules play. They had a couple video screens present that had themed characters explaining the rules of the haunted barn. This was really well put together and it helped tie things together at the beginning. This took around 1 minute to do. From here we entered the show.

This show was primarily country farm/scarecrow themed. All scenery and actors matched this closely. They had a variety of fun scares throughout the attraction. Moving one area to another we did encounter costumed actors to interact with us. There is a small portion of the show that briefly goes outside and then immediately back inside to be greeted by a marsh themed area. This continued on through some small shacks and into a tight cornfield maze of sorts. This was our absolute favorite part of this as it felt like you were in a cornfield, very narrow passages and a couple actors to interact with.

We spent around 7 Minutes in this attraction.

Overall I can say that we had a lot of fun at these attractions. Both shows were put together well, and offered a variety of scares, props and animatronics. I do feel that this show was a bit short on actors, however this seems to be a resounding theme in all shows this season.

I would recommend that Sonny Acres does a little more to advertise where to buy tickets and have more signage to indicate where the haunted barn and hayride entrances are. I would also like to have the option to buy tickets online or at the minimum with a card versus cash, but this is a minor gripe in the grand scheme of things.

This location offers a wide variety of other attractions in their Fall Festival that is also going on currently. They have carnival rides, food vendors and even a bar. This is a very family friendly attraction and it has a lot to offer for those looking for low level scares or even just to enjoy all things Fall.


To find out more about this event, visit:
https://sonnyacres.com/