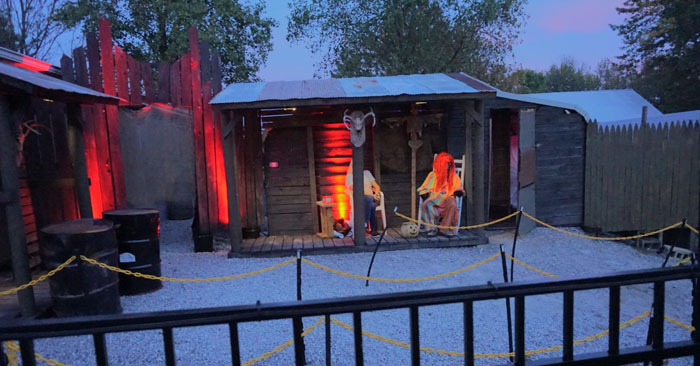 GPS led me to the event with no issues. There was also signage near the entrance indicating where to turn in.

There were a couple of actors milling about through the queue line area, interacting with the customers waiting in line. Ominous music was being played outside and the attraction's front porch façade with glowing lanterns hanging on either side of the entrance helped get customers in the mood for the attractions to come. There was also a 12-foot-tall skeleton set up as a photo op where patrons could take pictures of their group.

Crowd control was very well done. I didn't run into any other groups during my walks through both Sinister House and Tomahawk Trail.

Sinister Acres consists of two attractions, "Sinister House" and their new haunted feature "Tomahawk Trail", both of which featured indoor and outdoor sections.

I entered Sinister House first. Walking down a short gravel trail, I was surprised by an actress before I even arrived at the first scene. Walking into the room, I was approached by a character wearing a plaid shirt, overalls and a ghoulish mask. The introduction scene really set the mood for the rest of my experience at Sinister Acres. I don't want to reveal too much about it, but I will say that the scene involved a very clever and unique repurposing of a popular animated prop used in many haunted houses. Let's just say it was electrifying!

Actor movement throughout Sinister House was fast and furious. The majority of the actors employed high energy attacks. There were several areas where they utilized loud sounds like banging on 55 gallon drums, blowing air horns and other booming sound effects. Scare strikes were quick and they occurred often, which helped keep me off balance throughout most of the attraction.

Walking through Sinister House, I encountered many different scenes including a girl's playroom, a creepy living room, a clown midway and a corn stalk hallway.

One of my favorite areas featured a spinning room. As I walked into the circular scene, the actor inside asked "You want to go for a ride?" After I agreed to his offer, I received more than I had bargained for. It was a moving experience.

Another memorable area was set inside a small metal structure, where I had to duck down through a low hole in the wall that was painted to look like I was entering through the mouth of a large pumpkin. To continue through the area, I had to crouch down while at the same time pushing aside rubbery "string" that was impeding my movements. The clingy hanging objects and the low ceiling made traversing this area quite a challenge. Before leaving the scene, there was a fantastic pop-out scare by an actress with a great hiding place.

After surviving my trek through Sinister Acres, I walked over to their new attraction called Tomahawk Trail. The entire haunt was enclosed within a circular shaped fence line that was 8 to 10 feet tall. After only waiting for a couple of minutes, I was ushered into the attraction. Immediately after I entered, I was confronted by one the inhabitants of the trail who warned me about some of the creatures that I may encounter on my journey.

Walking across a wooden bridge, I saw several skeletons on both sides of the walkway, which had been impaled on sharp wooden spikes. Just a little further down the path was a rustic looking cabin in the woods. On their Facebook page they referred to this as their "Swamp Shack". Scraps of burlap cloth, gourds and flickering lanterns were hung at various intervals across the roofline. But this wasn't just a visually appealing set piece that customers passed by. Walking up a short flight of stairs, I continued along a narrow raised walkway, which led around the perimeter of the structure to the entrance. As I walked through the doorway, I saw a witch cooking up some sort of concoction in a large cauldron. She chanted "No mercy, no mercy, no mercy" as she mixed up the ingredients. Inside the shack were more hanging lanterns and a few shrunken heads.

A bit farther down the path was a realistic looking cave. In this area, I encountered a group of natives who were wearing furry animal pelts and creepy-looking masks. They were more low-key and less intimidating than the actors in the previous attraction, but their performances were convincing and their consistent invasion of my personal space was a bit unnerving.

At various other points along the trail in-between scenes, actors would spring out to get a scare or two. Yes, there were some unexpected surprises throughout the trail, but compared to Sinister House, this attraction had more of a creepy vibe.

Sinister Acres really stepped it up this year by adding the second attraction. The mixed themes and different styles of both haunts made the event interesting and more fun. The actors were all great and never broke character. It's nice to see how this attraction has grown since they first opened and I look forward to seeing what they put together for everyone next year. I would definitely check this one out if you get the chance.


To find out more about this event, visit:
https://sinisteracres.com/