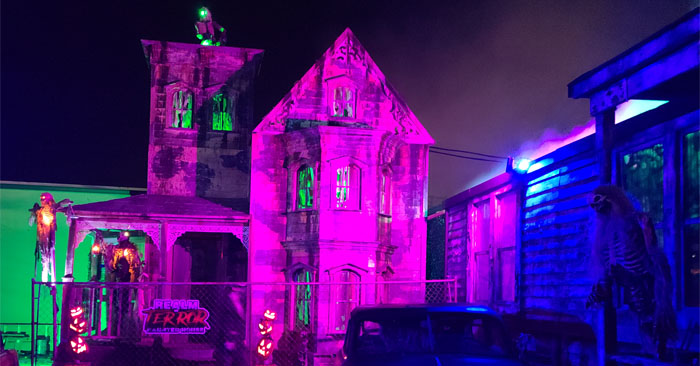 Realm of Terror is located in Kristof's Entertainment Center, off of Rollins Road. I always seem to drive by it because it comes up on you suddenly in the middle of the street. There are some lights and a video billboard, as well as several large skeletons leading you to the parking lot.

I did not see any actors lurking around, but there is an outside area that had a carnival feel, complete with games for prizes.

Good. We did not hit any groups before us, and no one caught up to our group.

They have kept the new look from two years ago, which I think works better. The outside is a very well built house, looking like it could come out of The Munsters or Addams Family, with some great purple lighting to make it look even creepier.

The haunt is very well built, it is very twisty and turny, with some angled walls and ceilings, as well as some low ceilings as well. Tall people may have to go on their hands and knees in certain parts of the house. It helped with the claustrophobic feel of the house, which I enjoyed.

They ended up using a lot of fog, which I feel helped with the feeling of being trapped. It also helped that many of the rooms had things hanging down, whether it be body parts in the hospital area or tubes and wires hanging down in other rooms. Things like that keeps the patron on their toes, and makes sure you don't put your guard down in a house like this.

They went the extra mile with the actors in costumes as well. There were not one, but two goat devil people in different parts of the house, and there was a great scarecrow towards the beginning that will definitely catch you off guard. There was also a great half-spider half-man that had one of the best masks I have seen in a haunt this year

The end of the haunt is my favorite part of the place, where it was one long maze. The first half of it, was in pitch black darkness, which would have been scary enough by itself. They decided to had both animatronics and actors pop out at you at random times which made it even scarier. The second half of the maze was almost worse, the walls were painted white, and there were multi-colored strobes hitting both the walls and you at all angles, making this part extremely disorienting, and hard to walk through.

This house was great, much more atmospheric in some places, and darker in other places than most of the haunts out there. They utilized both the twists and turns I enjoy in a haunt, as well as tight places, whether it was walls closing in or low ceilings. This house will make you keep your guard up throughout, and definitely one the best haunts I have seen this year.

To find out more about this event, visit:
https://www.realmofterror.com/