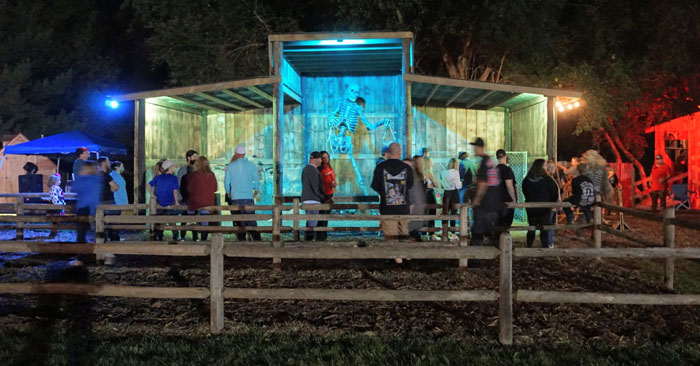 The event was very easy to find. GPS took me right to the entrance. As I was approaching the event, it was easy to see where to turn in. On either side of the entrance stood two 12 foot tall skeletons that were brightly illuminated. There was also a "R Acres of Terror" sign near the skeletons. After turning in, there were multiple parking attendants with flashlights who showed me where to park.

They did great in this category. When I arrived, there were multiple actors weaving in and out of the waiting line area, interacting with customers. Closer to the entrance of the attraction, there was a line of dark-themed carnival games to help patrons pass the time. One of them was a basketball-like game where customers tried to get the ball into a net held onto by a tall skeleton animatronic prop. Another game challenged customers to hit a catapult mechanism with a mallet and fling "brains" into the head cavity of a zombie prop.

Crowd control was not an issue. While walking through the haunted trail, I did not see any other customers, so they did a great job of spacing out groups.

After moving out of the queue line area, customers were led into a creepy tool shed made of weathered wood, where they were informed of the rules of the attraction. When my group had agreed to all of the rules, we were sent down a ramp toward the haunted trail. What followed was a long, twisting path through the dark woods. The walkway was bordered by ropes and tiki torches to keep everyone on the correct path. The ambiance of the woods was creepy on its own and that atmosphere was enhanced greatly due to the colored lighting, strobe lights, fog and various sound effects that were used throughout the attraction.

After only walking a short distance from the rules shed, we were immediately greeted with a scare, which set the mood for the rest of the haunt. Throughout the paths we traversed, we encountered several scenes. One of the first areas was a zombie playground with some zombie kids rotating on a playground spinner and others going up and down on a seesaw. When the zombie parents saw us, they attacked my group. We walked into a small shack that featured a visually appealing green laser "swamp", which was coupled with an audio element that made the actor's scare even more effective. In another area there were several trailers and a sign that read "Mine 39 - Keep Out". The actor in the scene seemed aggravated by our presence and made a threat or two, followed by a booming scare. That got us moving! At one point, we crossed a covered bridge that held a surprise or two. One of my favorite scares was the larger-than-life wolf attack. Another scene I enjoyed had large clown artwork, glowing jack-in-the-boxes, a kissing booth and a 6-foot-tall tub of popcorn with a clown head that popped out of it. As we walked through, several clowns taunted us.

In general, the majority of the actors had intimidating performances and they didn't break character. Their energy level really increased the scare factor of this event.

I had a great time while I was at "R" Acres of Terror. It was a lot of fun. I'm glad they decided to open up again in 2021. The addition of the dark-themed games made the visit even more enjoyable. I look forward to seeing what they have in store for everyone next year.


To find out more about this event, visit:
https://www.racresofterror.com/