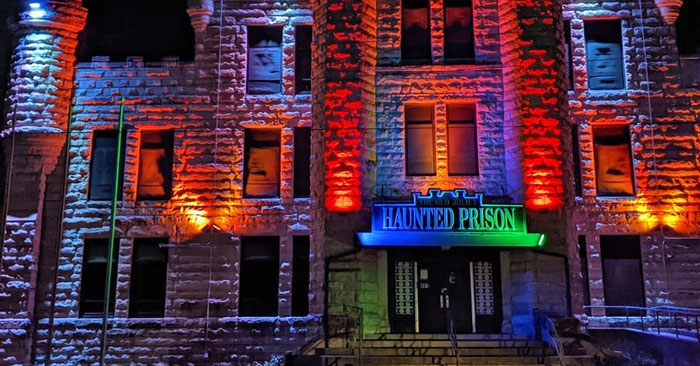 When approaching the haunted attraction on Collins Street, it was apparent that we were close because the large, ominous stone prison walls ran right alongside the road for a while before we needed to make the turn onto Woodruff Road. If someone was approaching from the opposite direction, I believe they would be able to see the front of the building which is lit up very well with different colors and a large sign. Finding the parking lot was a little bit trickier. There is a parking lot east of the building, but it wasn't lit as much as the front of the prison, so we kind of questioned whether or not the haunt was even open that night. Some lights and a lit sign for the entrance of the parking lot would help people unfamiliar with the area to find where they need to go. Once we located the lot, we did see that parking was plentiful and signs to the entrance of the attraction were clear.

We did see a couple of costumed characters while we were walking towards the entry point. There was a food truck and a booth where we bought some Dippin' Dots ice cream after our walk-through.

During our walkthrough of the prison, a.k.a. Ghost Chamber, we did not run into another group and no one caught up to us. The inside of the prison is set up so that you can see other groups walking through other portions of the show, but we did not catch up to anyone.

During our trek through The Forsaken, we also did not catch up to anyone and no one caught up to us.

We were beyond excited to experience the highly anticipated first season of the Old Joliet Haunted Prison this year! As a former haunt owner/creator, I can honestly say that this is a dream location for haunted house designers, so I was excited to see what they had done with it. They had two separate attractions on the property; the first of which was located within the women's prison, and the second was located outdoors, on what looked to be the prison yard.

As we walked towards the first attraction, which they named Ghost Chamber, we strolled past the back of the prison which was lit beautifully from the inside and the outside. There was dense fog rolling along the path, which added to the eerie ambiance. We were granted entry into Ghost Chamber, and we had a brief walk outdoors before we got to the entrance of the building. There were a couple of scenes set up along the way, and a couple of threatening characters.

At the entry point, we were given a brief intro about the building, which I appreciated. Upon entry into the building, we found a doctor's office waiting room, and a doctor's study. We found what looked to be like a laboratory, which was definitely the highlight of my walkthrough. The special effects in this area had me screaming in haunt designer. I saw ghostly special effects that I had never seen before and I was simply awestruck, to say the least. I am tempted to walk through again this year to see these scenes again.

As we continued on, we found the original jail cells that held inmates for decades. There was a countless number of these cells throughout our whole journey, and there were scares hiding in some of them. We were able to walk along the catwalk by these cells, where we could look down and see the entirety of the attraction below, which was very cool. The word I kept using during the walk by the prison cells was "surreal." This location is allegedly haunted in real life, so it definitely felt like we were being watched while walking by the holding cells.

When we got back down to the ground level, we walked through distressed walls and mazes that had been built in what looked to be like a large common area that inmates had shared at one point. These walls sent us down a path which was "twisty" rather than straight with simple 90 degree turns. The sets were themed to fit an industrial prison with a focus on medical practices, it seemed. There were several animatronics and inmates hiding behind scenery throughout, though it seemed more were dispersed closer to the beginning of the ground level portion rather than the end of the same level. There was ominous music playing throughout, which added to the feeling of dread. The walkthrough ended with a chainsaw chase outside.

The outdoor path then led us to the second attraction, which they named The Forsaken. Here, we were told that some of the inmates had been turned into zombies who had overrun the prison yard. We were provided with laser guns and instructions on how to take the infected prisoners down. We walked through a maze with several open areas where zombies were hiding and waiting to attack. I was startled a couple of times in this attraction. I am not usually a fan of zombie shooting attractions or laser tag, but this was a lot of fun. I enjoyed being on a walk through a haunted area and having the ability to interact with the show.

I really enjoyed my visit to the Old Joliet Haunted Prison during its inaugural year. I loved being able to see the inside of the prison and seeing some of the historical remnants on and inside of the property. In my experience, there is a challenge with building an attraction that is located in a historic environment. Finding the balance between preserving the original features and providing an experience that takes guests out of reality is difficult, but I think it was done well here. Some of the scenes were breathtaking, and I can only assume that they will add even more top of the line scenes in years to come. Several of the characters startled me, and their costumes fit in with the theme. I am excited to see what they do with this location in the future. For a show in their first year at a historic location, I think they did a good job.

To find out more about this event, visit:
https://hauntedprison.com/