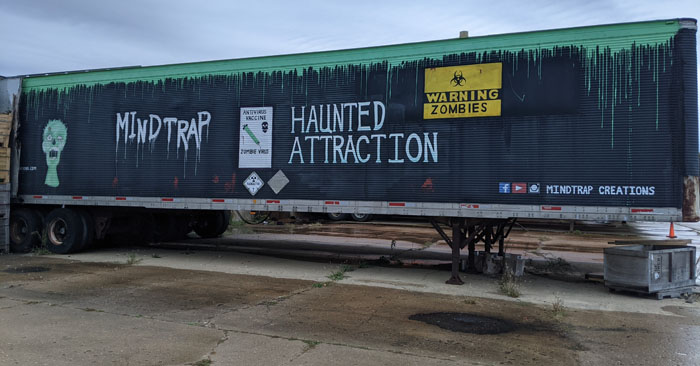 We followed the GPS instructions and we found the venue easily. There is a large semi-trailer with the haunted attraction's logo painted on the side facing the highway. They have a large gravel parking lot, and signs that show where to go to begin your visit. The haunted attraction is on the same property as Urban Warfare Paintball, which also has signs near the highway making the venue very easy to find.

After purchasing tickets, we were instructed to take the tour through the "scary way." This was a fairly long walk through a dark warehouse dimly lit with green lights and haunted by a few spirits who crept out of the darkness when we weren't expecting them. Once we got into the waiting area, we saw a large haunted house façade, an archway, and several interesting props that kept our eyes busy while we waited. There were a lot of details for us to take in during this time because the scene was put together very well. We saw a clown character who interacted with us and took a photo with us before we entered.

$15 for Mindtrap Haunted Attraction, $5 for their escape room, and $20 for the zombie paintball outside.

We were the first group of the evening, so we did not run into any groups, nor did anyone catch up with us.

After a brief hold in the waiting area, we posed for a photo with the clown character who we saw while we were in line. We were told to enter the house, so we opened the front door to the haunted house façade, and began our journey. We immediately saw paintings on the wall which I learned were important later, so if you visit, pay attention. We found a couple of characters who blocked the path for a moment, and then we found a hysterical doctor who had quite the appetite. We met a couple of great hostesses in a dining room, and we found a character that startled my friend. We passed through an industrial room and then into a psychedelic area with the perfect corresponding soundtrack playing in the background. We were challenged with finding the exit, which was more difficult than we had initially thought. We walked into a bright room that was filled to the brim with a very dense fog, and an actor helped us out. We then walked into a very dark space, which was a harsh transition from the brightness of the white foggy room.

After making our way through the bright and dark spaces that seemed to be built to confuse guests, we found a hallway with some impressive special effects and a hallway that we could feel eyes watching us in. We found a character who asked us our choice of culinary slicing techniques, and then showed us her creepy doll collection. We met a funny character with a thick accent who was offering gypsy-like services and reading our fate via sewing buttons. We then walked into a black light clown area with a couple of interactive clowns who were hiding the exit. These clowns were hysterical. We walked down a hallway that had hands sticking out of the walls on both sides, which was very eerie, and then into a Christmas themed room which was put together very well. A festive character invited us to check out a gift she had wrapped, and then she let us pass through a gingerbread house, but we weren't totally safe from her wrath yet. Shortly after, we crossed the train tracks and found the exit.

Shortly after our exit, we participated in the escape room that they offer, as well. It was my first escape room experience, and I was surprised at how quickly the anxiety set in as soon as the door closed. That was a fun experience.

Our visit at Mindtrap Haunted Attraction was fun! The actors in the space are interactive, the sounds that come from each of the rooms match the scenes well, and there is a variety of themes throughout the show. We noticed that all of the paintings and set pieces were unique, so the time and talent that the haunt put into creating this experience is evident. Several times, we were faced with the challenge of finding the next exit. The actors with these rooms did a good job of trapping us and toying with our minds, which perfectly correlates with their attraction's name. A job well done by the team at Mindtrap Haunted Attraction!