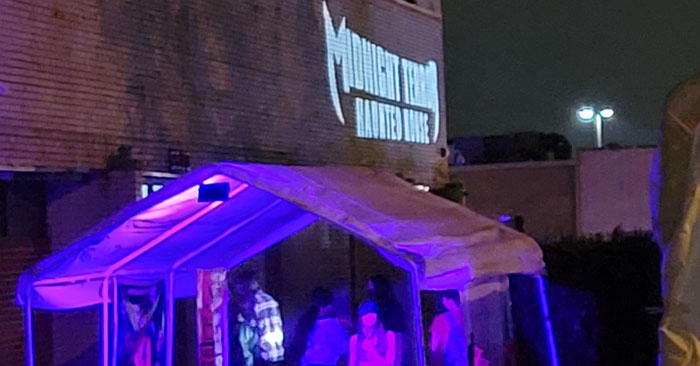 This haunt is easily visible from the street, with flashing lights and signs. There is also a projection of the haunt name on the side of the building that can be seen from the street. Parking, however, is a bit tricky. Although the haunt says they have on-site parking, and there is a lot in front of the haunt itself, if you turn in there you will be directed to another lot behind the haunt that is actually the parking lot of a bone and joint center. From there you will have to walk along the front of the haunt and past the waiting area to get back to the ticket window. Whether or not the parking right by the haunt is open on other nights is unknown, but on the night we went it was closed even though there were no cars in it.

Wait entertainment consisted of a DJ in the outside tent where people waited to get inside as well as several actors walking around outside. Once inside, there is another waiting area with video screens and music playing as well.

General Admission $28/VIP $45/Immediate Entry $60 - NOTE: There is a $2 fee added at each level and if purchasing online there is an additional $5.70 added to the price for each ticket.

Medium - this may vary depending on your scare tolerance. Some younger people or people who are easily scared may say it's medium-high.

The crowds were not large when we arrived, so we didn't see any issues with crowd control, but we did notice that almost all waiting was outside. The only inside area was a series of holding pens for groups, which were numbered. While waiting we saw various groups being brought inside and put into individual pens and then the #1 group would be brought to the main entrance for the haunt. It all seems quite efficient, and groups were spaced out well.

This haunt is large and has mostly a post-apocalyptic/industrial feel to it. The first 60% of the haunt consists of mostly similar rooms, decked out with bits of old electronics, rusty pipes and grates, and loose wiring. Following these rooms comes a variety of rooms that make up what seems to be a small town, including shops, a school with various room, houses, and street scenes, followed by a swampy area with an abandoned church and crypt.

In terms of set design, the haunt does a really good job at theming the scenes and rooms, with lots of interesting bits and pieces of bric a brac in the backgrounds that makes you want to stop and take a closer look. Also, most of the rooms have ceilings of sorts, which help with the enclosed, realistic feel as well as giving actors the ability to look down on you from above. The rooms have twists and turns in them, often made out of stacks of some type of item, such as school desks, toilets, chairs, or other things. These make for clever room dividers and fit with the specific theme of a given room.

In terms of actors, there were not may in the haunt on the night we visited. There were roughly 15-20 at a guess, and these were spaced out, so that in numerous rooms there were no actors. Most actors were younger but played their parts well, with varied characterizations, from crazy and giggly, to quiet and brooding. As mentioned, though, there were not a lot of them, so scares were much more spaced out.

And speaking of spacing, for those concerned about COVID-19 precautions, Midnight Terror does a great job of keeping people distanced, including when waiting in line, with limits on how many people can be grouped together or can go through the haunt together. Also, masks are required of guests and actors, and all the actors we saw were wearing masks or face shields or both. Additionally, the actors kept a distance from visitors, interacting but not getting up in peoples' faces or being too close to them for too long.

The haunt also seemed to take a lot longer than it did. It was only 16 minutes from start to finish (and this was with taking time to look at each room in more detail) and yet it seemed as if it was about 20-25 minutes. Your mileage may vary, of course, depending on the number of visitors or the number of actors or how quickly you personally move through the haunt.

However, despite the nice sets and decent actors, I have to say that there was something lacking at Midnight Terror, and we left feeling a bit underwhelmed, especially for the price. We paid $67 for immediate entry as this haunt is very popular and gets crowded quickly, but even if we had paid the $35 for general admission and fees it would have seemed like there was something missing. If we had to put one word to it it might be "dull" - the set design was really nice and the layout was interesting, but the overall experience was just OK. We didn't come away feeling as though it was a knock your socks off experience, but also didn't feel like it was terrible by any means.

Thus, if you want to visit Midnight Terror we'd suggest going on a weeknight or a Sunday and getting there early so you can get away with paying for just general admission and avoiding the large crowds that show up. If you like good set design there's a lot to see and enjoy here and perhaps on other nights there will be more actors, as in the past we know that this haunt has packed in the actors so that they jump out of everywhere. Again, your mileage may vary, but if you do go it might not be worth a really long wait in line.

To find out more about this event, visit:
https://midnightterrorhauntedhouse.com/