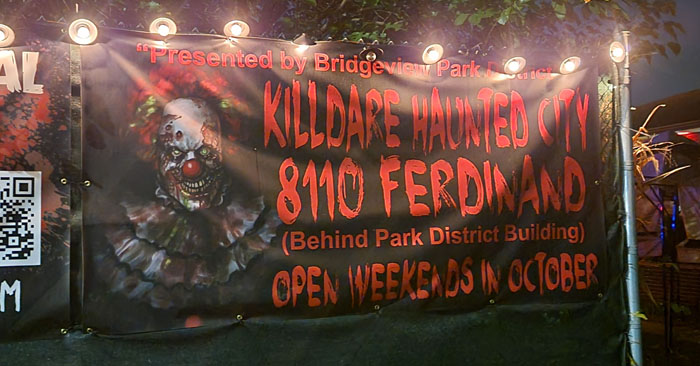 This haunt is located in a local park district. NOTE: the address given for the haunt brings people to the back side of the haunt itself. If coming by car, you will not be able to access the haunt from this address. When we arrived there was a handwritten sign posted on a truck that was parked there indicating that the actual address is off Oketo Avenue. To gain entrance, people need to go to 81st street and Oketo Avenue. If driving down 83rd street there are signs pointing to the entrance and as the haunt is in a larger open area it is visible from the road. Basically, for navigation purposes you can put in the address for the Village of Bridgeview Park District, and this should get you to the haunt.

There is ample parking out in front of the Park District building, and you will need to enter there to purchase tickets. The haunt itself is in the middle of the park district area.

Wait entertainment was limited to two live actors who wandered the grounds between the haunt and the ticket area. While there were only two of them, they were both very good, remaining in character throughout, following people up and down the walkway, and even coming up to peoples' cars and waiting for them to exit.

There was no line when we visited so there was no need for crowd control there. There were a few other people present but we did not run into any of them in the haunt.

Killdare Haunted City harkens back to the olden days of haunted houses that were sponsored by local park districts or community centers. There aren't too many of these types of haunts left, so it was nice to see a new one open. That said, these types of haunts generally have a lower scare level than professional haunts and are usually staffed by younger actors. Such was the case here as well.

Overall, the haunt was laid out very nicely, using existing Park District buildings for themes / scenes and effectively connecting them using outside areas as well. Thus, visitors had the experience of both an indoor and outdoor haunt, with the inside space being actual buildings (and even a railroad caboose). Scenes included a zombie car crash area, complete with real vehicles, the railroad caboose which formed the very first part of the haunt, a trailer park (with real trailer), outer space scenes, a carnival, jungle, and more.

Scenes consisted mainly of static props and scenery, with no animatronics to speak of. Any scares were entirely provided by actual actors, of which there were about a dozen. A few had on full costumes whereas others simply had some basic makeup. Some actors went for the quite creepiness factor while others interacted more, Special mention goes to one clown who took her clown mask off to reveal that her face was painted in the same way as the mask. A nice touch, that.

One thing to note was that the variety of scenes was quite nice, and the spacing of the haunt was also good, there were numerous open areas and few entirely enclosed spaces, allowing for more freedom of movement. Also, the haunt seemed to take a lot longer than it did, which is actually quote a good thing when one is visiting a haunted house.

Overall, the scare level is what one would expect from a haunt of this type - adults most likely would find it on the low side unless they scare easily or get caught by a jump scare. Kids, on the other hand, might find it a bit scarier. If you're looking for a more relaxed, less crowded, more laid-back community-flavored haunt, you can't go wrong here. It's basically old school fun for the whole family. You can bring the kids and they won't be terrified incessantly by haunt actors, yet they will probably see enough to scare them a bit.

Killdare Haunted City is a good alternative to the big professional haunts for those looking for a fun night out without all of the intensity and crowds.


To find out more about this event, visit:
https://www.instagram.com/killdarehaunt/