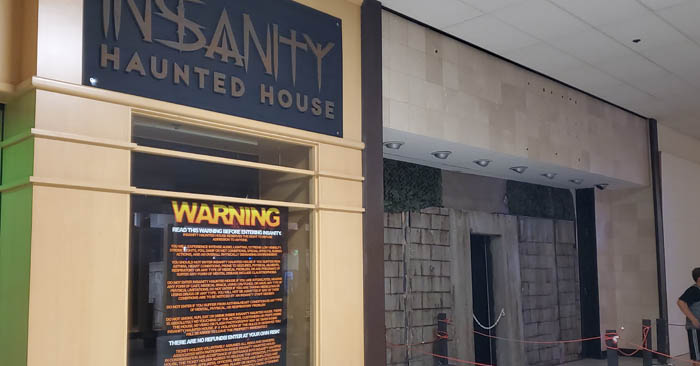 Located inside of the mall, parking is free and vast. Once you get to the Peru Mall you park on the west side lot, opposite end of the AMC movie theaters. There is a slow flashing strobe and signage to help guide your way to the entrance. This can be seen as you are traveling on IL-251 as the sun has gone down. So GPS takes you right there. The entrances into the mall are also spread apart (one on each end). Unlike most malls that have another entrance road near the center.

While in the queue line, which is in the middle of the mall's main hallway, they had the aforementioned music playing, and an actor roaming interacting with guests, a well-dressed mechanical clown... well that's the best way I can describe him. Sometimes creating a scare by creeping up. Sometimes using a boo blaster. Sometimes asking waiting guests various questions.

Pro tip: If you prove you liked their page on Facebook you can receive a $1 discount at the ticket booth.

The haunt itself seemed to take up two suites next to each other. The flow of groups was done very well. From what I could see, there seemed to be 5 groups inside at a single time which varied anywhere from 2 to 6 people per group. When we were inside we saw no other group behind or in front of us.

We walked through the entire haunt with very few stopping points. The pauses that we had were caused by the actors to slightly delay our progress for less than 30 seconds at a time. Only one of them was non speaking, the others used some noises and a few minor threats of bodily harm.

The few mazes that were there could also slow your progress mainly the circus tent and laser swamp.

Returning to Insanity from a few years past sparked my interest, and well I was rather pleased.

Let's start with going in. The "ticket taking" ghoul was on the money. Offered to take our photo with one of our phones, and offered hand sanitizer. A little out of left field, but he's a demon who cares. After the photo op and just before entering he instructed us to rip our ticket and discard the stub in a pail. So yes, thank you for our safety and for others.

Entering the dark hall filled with creeping vines on each side of us, we made a turn and stumbled into the junkyard. Bits of pieces of stuff around us making our way through mounds of discarded parts and making a loop around a tire pile with other stacked trash. Man, the resident was not happy about that, so we continued onto the porch and living room. A familiar scene, with tv's stacked on one another (sometimes haphazardly) mostly all static in an unkempt room.

As we walked into the library shelves filled with books stacked all around and they created columns reaching the ceiling. I see we may have interrupted the local educated swine as he was going over one of his favorite novels.

The dining room was filled with rotted meats and maybe other selections of roadkill laying on the unappetizing table. As much as me and my wife disagree about a few things, I don't think we bicker as much as the "unhappily" married couple did while we made our way in the kitchen. After all that we walked into the bathroom, and you wish you didn't want to see what aftermath was waiting for you after the previous feast.

This was a somewhat interesting transition as you walk through the old homestead throne room, to the more larger and communal restroom likely seen in a truck stop or big box store. Try not to look in the stalls.

Into the insane asylum where no one really knows the true answers... What makes a person sane? How do you know if you're crazy or not? If you are crazy, how crazy are you on a scale of 1 to giraffe? These are the questions you ask the sweat stain on the wall... and you haven't lived till you walk into a church that's connected to an insane asylum. We were greeted by the lovely Sister Mary ... well um, we were greeted. The church design and detail was one of the best features at this location. You do kind of loose yourself at this point.

And what's a haunt without a circus themed "red and white" maze? Attempting to navigate the narrow canvas panels was pretty simple at first. Then the conundrum, multiple paths.... And well don't take advice from a clown, or do you? I suppose the choice is yours to make. But make it quickly or you will be stuck face to face with a clown, and you might not have Coulrophobia yet, but you may get it in here.

Overall opinions. Insanity has improved over the years. The actors and their costumes have gotten better and more creative. Many of them were able to have a patter and a few lines to go by. There are some nice surprises waiting for you in places you may not quite expect.

Main props to the sound-proofing and maze design. As I noted earlier there were certainly multiple groups of people at the same time, and I did not hear any screaming from a non actor, nor did I hear any "telltale spoilers" like a prop trigger or a scare actor from the distance interacting with another group. I was most happy with the fun and unique wall art I would see in various rooms and in the hallways which also tied some of the scenes together.

I could see Insanity go no where but up in the pro haunt community,. To make it larger, longer and get it out of the local mall.


To find out more about this event, visit:
http://insanityhh.com/