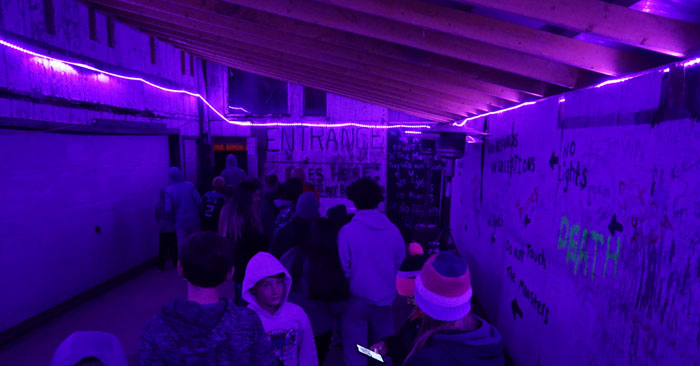 Hoppers Haunted House was easy to find. GPS took me right to it. Also, as I approached the property, there was a bright backlit arrow sign near the entrance. After turning in, a parking attendant pointed out where I needed to park. Other illuminated signs along the road and an ambulance with flashing lights also made Hoppers more visible to cars driving by.

After purchasing my ticket, the staff at the ticket booth instructed me to go to the nearby covered waiting area. Although there wasn't much in terms of traditional wait entertainment, I could hear the loud music and an occasional scream coming from within the attraction, which helped enhance the mood prior to entering.

They did a great job in this category. I didn't see any other groups while inside the attraction, so customers were spaced out appropriately.

Hoppers is an old-school haunt with a lot of very dark areas. Set up at regular intervals along the twisting path inside the attraction were small scenes located behind large fence-covered openings. Some of the scenes contained static props, while others also had actors who were eager to spring out of their hiding places to get a good scare. The dark corners of the hallways provided great cover for the actors. On several occasions, I was startled by creatures attacking from the darkness. A couple of times the path led outside, then back into the building, which added to the experience.

Some of the themes / elements that were encountered include a hazardous waste dump, black & white checkerboard strobe room, open casket funeral, a hallway of doors, a graveyard and some creepy catacombs. Multiple strobe lights and glowing splatters / artwork were used throughout the attraction, for added effect.

Many of the actors in the haunt used pop-out scares, while others were more interactive. While walking through the attraction, I heard creepy laughter, screams and also the following lines: "I'm SO not following you" (funny!), "We've been waiting for you", "Come out, come out wherever you are" and my personal favorite "When you're in my darkness, you'll never see the knife coming, but you'll feel the pain".

They also used more subtle techniques to creep me out, like dragging their feet behind me, tapping on barriers, rattling chain-link fencing and running their fingernails along the walls. It was quite effective, especially in areas that were completely silent.

I had a great time at Hoppers Haunted House this year. The actors were on point and never broke character. I really enjoy the dark, old-school feel of this attraction. It is a great example of an event that can be entertaining, without the need for expensive props and animatronics. If you are in the Rockford area, be sure to visit Hoppers this year.

To find out more about this event, visit:
https://www.facebook.com/HoppersHouse