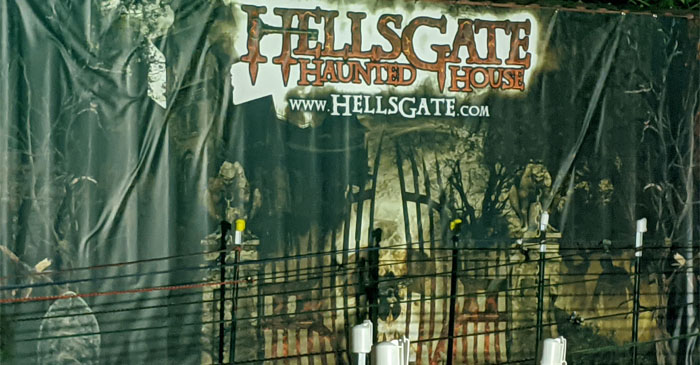 This attraction utilizes a parking lot in a separate location from the Haunt itself. When using a GPS guide to find Hell's Gate, use the address 301 W. Second St. Parking lot attendants direct vehicles to a large parking area, then attendees are taken by bus to the primary location of the haunt. You cannot park where the haunt is actually located. There are signs for the attraction along the main road, but traffic is pretty congested in the area at peak weekend times and could be easy to miss.

After being dropped off by the bus at the primary location, guests are directed to the ticket line (tickets can be bought on site or online purchases must go through Will Call). From there, guests can enter the main queue, which is sheltered by a canopy. Loud metal music plays over speakers and costumed actors stalk and terrify the guests while they wait their turn. Special shout-out to the Swamp Monster who nearly gave the gal in front of me a heart attack.

$35 general admission, $50 fast pass, $65 instant entry, $125 Hell Pass (special guest attention by actors), $150 all access (includes merch) and group rates all listed on the website. There are also extra attractions, games, concessions, and merchandise available for an extra charge at the end of the Haunt.

Time in the actual Haunt (not including interval times listed below) -- 17.5 min
Time spent waiting in line -- 24 min
Time spent in introduction scenes -- 13 min (two intros, one for the trail and one for the mansion)
Time spent in the rules room -- 6.5 min
Check-points inside the attraction, when event staff stops you momentarily, to help split up groups. --- 16.5 min (four separate areas in the mansion)

Hell's Gate staff and actors have crowd control down to a science. Most (if not all) were operating in pairs and all equipped with head/ear pieces to help coordinate and track guest movement. Groups did not exceed 7 guests (most were 5), and aside from checkpoints within the attraction, not once did we run into another group or have to stop our own pace through the Haunt. Everything ran very smoothly.

I had some trouble with my GPS in finding Hell's Gate at first, since the address listed on the website is not where guests need to park (this was my own fault, as I didn't read the disclaimer on the website describing where to park beforehand), but once I arrived in the correct place, I knew I was already in for a fun ride. When sitting on the bus waiting to be taken to the actual Haunt (wear your mask!), I couldn't help but remember what my True Crime obsession has taught me about the dangers of a second location.

The bus ride was about ten minutes long, though not over a great distance (downtown Lockport can be busy on weekend nights), and ended in a heavily wooded area creepily lit by spotlights, contained fire pits, and smoke machines. The music was pumping hard as I picked up my tickets and headed under the line tent, and actors of the Zombie Army had fun with the more squeamish of guests. Staff were all very helpful and friendly, and clearly enjoying their return to the business of scaring people.

The first part of Hell's Gate is a long trek through the woods, decorated by creepy totems, bone sculptures, and graveyard scenes found in the best cult/hillbilly horror genre, as escapees of Hell (zombies) surround you from all sides. Most of this part is a warm-up to the actual Haunt, but it absolutely sets the perfect atmosphere.

The trail leads up to the main event, the Mansion, which appears as a genuine haunted building in the middle of the woods (10/10 production quality) where groups are organized and entertained by House Staff (undead caretakers of the Mansion) until they are urged inside. The first room is the introduction to the Mansion's hellish story involving demented twin girls and their horrific mother (special effects and acting were great!), and from there begins the journey through the house itself, on a quest to find the Key To Hell at the end of the line.

Highlights of the House include the gruesome Pig People in the kitchens, the twins who stalk guests through the entire house, the Nursery (first time I've encountered such effective creepiness just by using a lot of little girl dresses, also beware if you hate Dolls) and the escalation of contorted, desperate souls the closer you descend towards the gate of Hell itself.

After the Haunt, treat yourself to some quality merch at the gift shop (also includes things from local artists!), a full bar and concessions stand, pumpkin chucking, Zombie Brain Toss, a few awesome photo-ops, and even a mini Escape Room! There are plenty of tables to sit and enjoy the atmosphere and whatever horror movie they have playing on a drive-in sized screen (City of the Dead was playing when I was there). All in all, plan on spending a few hours at Hell's Gate with friends, but leave the kiddos at home. This Haunter recommends you keep it at 16+.

To find out more about this event, visit:
https://www.hellsgate.com/