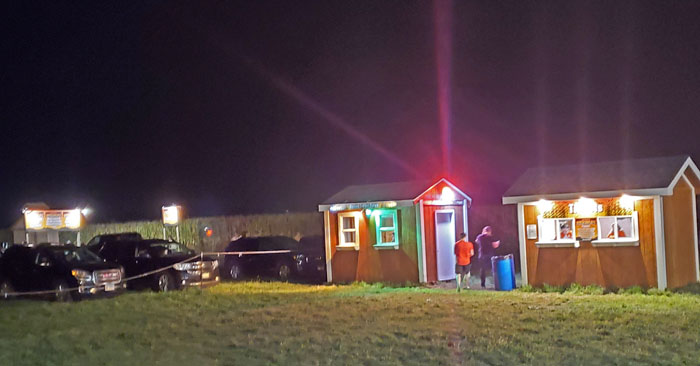 Located at Heaps Giant Pumpkin Farm off the corner of Grove Rd. and Rt. 52. Your GPS will take you right to the location, there is only one entrance so be on the lookout there are no lights at the entrance just windsails with the farm name. You will notice the cars parked in the grass field. The ticket booths and some of the site's buildings are lit up.

We opted for the express pass. Which also gives you access to the Flashlight Maze and the Hayride. While we were there. It did seem that there was an actor weaving in and out of the GA line to keep some guests busy and entertained. There were no other actors on the grounds.

19.5 minutes
Depending on your footing and stride this can take a little less time on dry land. And of course if you get caught in the maze and take a wrong path or two. It can be extremely longer. We were lucky enough to make the right choices and made it out without delay.

At the entrance they asked for us to wait about a minute or so for the group ahead of us to make progress. When we were ushered to go on, it was just us two for a bit, just passed the point after the machine shop we knew a group was somewhere behind us, but because of all the turns and curves we didn't see them.

It was not until we reached the clown area that we caught up with a group in front of us. They hard a time with the moist ground, and they let us go ahead of them. The group behind us also caught up. There didn't seem to be any actor control points to help with the flow. It was everyone there keeping their own speed through the haunt. It was closer to the prison and the Maize Maze where it seemed more of a conga line. But everyone was in good spirits, so no one seemed upset that we all got together.

We entered the corridor of the tall corn maze. This is done very well with various scenes built in the field and you transition them via the corn halls connecting to them. Many times you do not see a scene till you turn a corner or approach it from a long distance. All very effective as part of the experience. The width of the path through the corn is about two people. But it has been raining recently so there were some slippery areas, but nothing too impossible to tread. It was enough that you know if you lose your footing that the ground was not entirely stable. This happened only a few select times. So it was not an issue.

The first scene we made it to would be the backwater hillbilly shack, where the actors come to you and make conversation. A very unappetizing dinner was offered to us, but we passed. There were twin girls in their doll room who asked if we could stay and play. We also declined the invite. There were some minor scenes like the auto repair / machine shop which was an area you passed in front of and were not fully immersed in like most of the scenes, which is a bit of a nice design choice. The swamp was fairly basic. You just simply walk across; there was no zig zag path but it was still very effective. In between each scene lasted maybe anywhere from thirty seconds or closer to a minute. Time escapes you when you're walking in near darkness in a field of corn. While moving around, you do notice ambient sounds and a few of the startle scares in the distance.

Entering the clown section is by far the largest scene in the corn maze, with what seems to be the most actors gathered in one place. You curve around a three ring circus act surrounded with a few body parts

Passing the pig pen and what seemed like a very unlucky farmer who kinda got caught up during feeding time, the butcher is next where the boar headed fiend was found slicing the meats and you walk right into the shop. Then there was a little path that takes you into the office of the insane asylum where the patients may have gotten out and made sure the office staff were not to be found. The doctor while working on a patient has some alternative plans for human "progress"

The funeral parlor scene is always nicely decorated and there is a lot to look at. The human statue there was very talented and fooled us, can you tell which one is real? The mortuary where clients of the previous scene will not make it to the grave site. Hanging there, you will have to pass in between them to make it out back into the darkness of the corn.

It seemed we wandered into the prison where there were a few cells on each side of the path and the prisoners left alone to maybe fend for themselves. Here we can hear the air raid sirens and the emergency lights. This part of the maze was just that, an actual maze. Where in the past you had a choice of paths to take.

There was a list of instructions at the entrance where you scan a QR code at various checkpoints, and answer a trivia question based on one of the following... topics for kids, farming, learned it at school, or movies from 2010's. As you get each answer right, you will get a hint on what path you can take to progress through the maze. If you enter all the checkpoints, you are put in a drawing to win a pumpkin. This is a go at your own pace kind of experience. There is no lighting so if your phone is low on battery or you didn't bring a flashlight this is not for you.

This was a bit tricky to find, we asked where to go and we were given vague directions by staff. There were no signs to follow or a lit pathway. We followed a group of people in hopes they knew what to do. This is a no thrills hayride out to the pumpkin field and back. I'm sure it's nice for a small family or a first date. The round trip takes about 16 minutes and they have two trailers going at once. There is a concession stand near the parking lot and main ticket booth which is about 150 yards from the line for the hayride. It might be a good idea to add a second stand for something small and simple like hot chocolate or cider. But that's just my thoughts.

Heaps is a small pumpkin farm open during the days too with a petting zoo and other activities for kids. But if you are just doing the Haunted Corn Maze be prepared to pay double if you don't want to wait in line. There is no fast pass option without the other attractions added.


To find out more about this event, visit:
https://heapshauntedcornmaze.com/