2021 Hayride Of Horror & Curse Of The Bayou Review 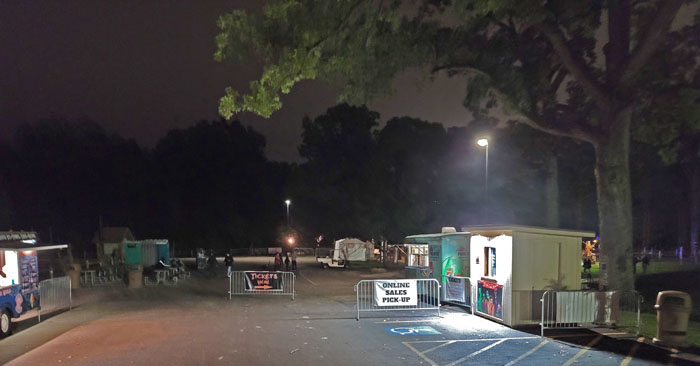 The location is not easily visible from the road, this show is set back in the woods, in Dellwood park in Lockport.

Your GPS will take you directly to this location. They do have a large sign out along the road leading into the grounds.

Wait entertainment consisted of music and costumed actors interacting with patrons.
There is limited ability to really theme out a park, however they do a good job of working to entertain guests while in line.

Hayride of Horror 16 Minutes
Curse Of the Bayou 12 Minutes

Crowd control was sufficient for both attractions, we did not have any issues running into groups while in either attraction

Hayride of Horror and Curse of the Bayou is being done at Dellwood Park in Lockport. This location was easy to find with Google maps which led us directly to the location without issue.

There is a large sign at the entrance of the park that identifies that you are there. I would say it would be useful to perhaps add some additional signage or navigation signs to make things a bit easier to locate. But overall it was not difficult to find.

Once we arrived we walked over to their ticket booth and exchanged our printout from our online purchase for paper tickets to both attractions.

After this was done we found our way over to the main queue line, this space is completely outdoors and well lit. While waiting in line we were greeted with music and costumed actors interacting with the crowd. Overall we waited around 5 minutes in line. This likely won't always be the case late in the season, however it was a little rainy during our visit. I would expect longer lines when it's nicer out.

After our brief wait, we were told to follow our guide into the rules tent. The basic rules were explained to us and we were again requested to follow our guide over to the hayride entrance. We were brought over a creepy bridge in the woods into a themed area where some actors greeted us and spoke about the hayride and some of what we would be seeing.

We were guided on to the hayride where we waited around 5 minutes for everyone to get loaded on and the ride began. On this ride we experienced a wide variety of scenes that were spread out throughout the park. Each scene offered something new around each corner. The scenes were staffed with actors young and old who ran alongside the hayride and some even joined along for the ride.

These scenes seemed fairly well staffed, however it should be noted the scenes for the most part are rather small and more of a drive by attraction.

You can definitely see that the actors are a bit on the younger side as this is an attraction run by the Lockport Park district, however this is in no way an indication of poor acting, these actors filled their scenes well and played well with the crowd as we drove by. As mentioned earlier some actors even hopped on to the hayride to interact with guests.

As the hayride progressed we did drive by many different scenes of varying intensity and theme. Each scene seems to have its own theme which had actors appropriately dressed.

We never had any issues with running into other groups because they did sufficiently space the groups to allow enough spacing.

Overall we were on the hayride for 16 minutes total.

After we unloaded from the hayride we were directed over to the queue line for the Curse of the Bayou, there were not any groups ahead of us and we quickly passed through this line and into the attraction.

This attraction is a full walk through the woods where we were greeted by many fun scenery elements and costumed actors delivering some fun and effective scares. This walk continued until we came upon a building and a Witch Doctor Character who introduced us to the next part. This area consists of a maze, definitely pay attention to your path and you can be led to a dead end. This maze also provided a variety of scenes and did have some actors, there were not a ton, but enough to get some quick scares and make the maze fun.

The maze has changed a lot from years in the past, it added a really fun element and it seemed to us they expanded this portion of the show. The actors in this area did a great job interacting with and guiding guests. We were in this attraction for around 12 minutes.

Once we exited the show we were met with a short walk back to the midway where they had a few vendors and a variety of entertainment.

Overall we can say that we enjoyed our visit to this show. This show features something unique for our area, they are offering a family friendly attraction without trying to be the most extreme. They do provide a great opportunity for younger children to experience Halloween on a limited and safe basis. We did not see any actors explicitly seek out scaring kids to any extreme.

This show does a great job of reminding us of the roots of haunted attractions. A fun, community run event that allows people to get in the Halloween spirit.

It seems that with each year we visit this show continually gets better and better. They take the time to add new elements and expand year after year.

They also took the time to work on costuming and getting actors into makeup to match their various scenes.

I can say we were impressed by this show, I can say we are excited to see how this show will continue to grow over the years.


To find out more about this event, visit:
https://www.hayrideofhorror.com