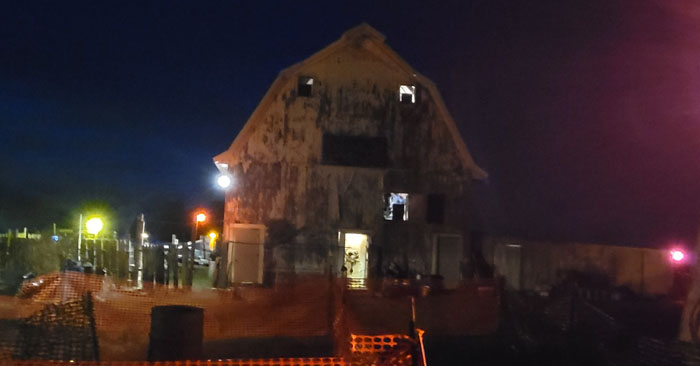 GPS is a must, but be aware it takes you to a school that is across the street from Haunted Haven. There is no lighted sign from the street, but you will see an old, white barn. This building is Haunted Haven.

There is a small driveway you have to turn into for parking. It can be hard to find, but they do have a large, non- lighted sign with an arrow that says parking.

Parking itself is in a plowed field with no lights (or parking attendees) next to the Haunted Attraction.

There were 2 characters interacting with the line: one was a beat- up looking farmer, playing around some barrels that were on fire. The other was "Dolly"- who told us the story of what happened in "Sick City''.

They had normal, heavy rock music playing in the background while we waited in line.

Wait: Our group arrived at Haunted Haven at 7p. We were the second group in line, but were unable to purchase our tickets until 7:30pm. We then stood in a queue line to enter the haunt for another 20 mins.
(Overall, it took almost 1 hour to get into the show.)

Rules area: 5 mins (due to the actor stumbling over his lines).

Haunted Haven: 9 mins (but everyone walks at their own pace).

Unfortunately, my group ended up bumping into the first group- but I feel like I should explain why: the first group was scared, causing them to push back into prior rooms. I want to mention that before we bumped into this group, multiple characters in rooms prior tried to stall us and slow my group down, and no groups after us caught up to us. Overall, the show was pretty smooth up to that point.

As I mentioned prior (while waiting in the queue line), the character "Dolly" told us the story of "Sick City." She explained that the government sends all the people they deem "sick minded" here- which is why it was named "Sick City". The residents of "Sick City" have been left for dead, with no supplies- so they have started eating each other, and have become even more sick and deranged.

Before entering, Plague Doctor in the rules room advised us what to do and not do while inside "Sick City." Once we were allowed to enter the outside portion of the haunt, we were welcomed by a slew of "sick people"- who were coughing and begging us to help them. As we got closer to the barn, these "sick people" got more aggressive and demanding. Some even wanted to eat us and wear our skin to keep them warm!

One of these deranged "sick people" informed us his best friend, "Carl" (who was a stick), wanted to eat us as well if we didn't say hello.

As we moved into the barn portion of the haunt, we found ourselves walking into a swamp area. Different creatures popped in-and-out of the fog here.

In an old front room, a "victim" begged us to help them- claiming they knew the way to safety. The door they told us to open however, revealed a vampire who started clawing at us, asking to drink our blood.

I was a little confused how the next room fit into the storyline: a character dressed as a steampunk cowboy (who reminded me of the Will Smith movie "Wild Wild West") was flirting with us and told us we would be put into body bags.

The bathroom scene held a nice surprise when a character jumped out of the bathtub, telling us that we bothered them from bathing.

And who would have known that the sick minded people here in "Sick City" attended church? As we entered the church scene, a character dressed in normal clothing told us to wait, then another character jumped out from behind the church podium- screaming at us to get on our knees and worship Satan. We opted out and shuffled away........

Into an even worse situation.

CLOWNS! With long hallways of colorful lights and crazy sounds, clowns were everywhere! Attacking us from every direction, making us feel like we were going in circles! Until we eventually found our way out to safety.....


To find out more about this event, visit:
https://hauntedhaven.org/