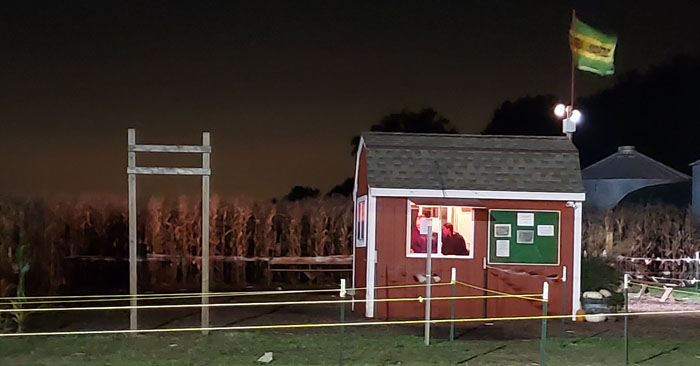 We used our GPS to get the location of the Jonamac Orchard coming from the Southeast traveling via side roads after getting off the expressway near DeKalb, It was paved road for a while and then it turned to a gravel road to the next intersection, If you want to avoid this travel to Malta proper, just north of the Orchard.

The parking and location of the Haunted Corn Maze is next to the orchard. It was very well lit up and had plenty of parking. The ticket booth is also easy to spot, they also provide some concessions.

We arrived at our time slot, there were very few people in line, you can hear music playing from another part of the attraction, but that was the extent of the queue line entertainment.

They work off scheduled time slots, so it's wise to get your tickets online, there are times they are sold out a day in advance.

24.5 minutes
The length of your visit in the corn maze can vary. There are alternate paths, deadends and other obstacles unlike many haunted corn mazes which have a dedicated path with very few options. I believe we made an average stride.

There was a ticket taker who informed us of the rules, then allowed us to enter when it was our time. For the most part there were no groups that we clashed with. In reality, the only points in the maze where you were in a holding pattern was only at the zombie outbreak gate and the entrance to the laser swamp. Which were completely intentional.

The uniqueness of this was there were multiple paths to take and may get you lost. But it's ok there are uniformed guides through the maze to help you continue and forge on.

Well we started to venture in and immediately found a dead end and had to turn around. Now as you walk the path you will encounter guides found at some points throughout. We did start to see some lighting in the corn at some points and used that as a compass and how to navigate the corn stalks. There will be a few actors and jump scares before you encounter the guides who give you a choice of paths, these choices are somewhat misleading. They are longer than 25 foot till you go back to the main path. The guides at this point do tell you that white strobe lights and the red strobe lights have different meanings. Very helpful advice, we had learned there were multiple paths that either visitors forged a path of their own, or maybe a rogue animal grazing without abandon.

As we started on our way by choosing our path, there were many strobe lights to follow. This is where I had a slight problem. The LED lights were facing me and blinding me on the path. As their website warns, this attraction may be hazardous to anyone prone to motion sickness or seizures.

Appearing in one area there was a series of white strobe lights that formed an arch, I was to believe that was the path to follow, well until we made it to the edge of the maze with farm vehicles parked alongside the wide path, we knew this was not the correct way. We had to make a 180 and return to the path where we left off. Continuing down around a corner once again there were more white strobes, so I continued toward the lights coming up to many surprise T-Intersections, only because we did not realize it until we were right upon it.

While on the path we can hear others screaming from some of the hidden frights found inside. First props to the chainsaw wielding maniac. Startle scare on the first pull, as mentioned before you can hear it somewhere in the distance, but you never know where anyone or anything will pop up. Same as the ghouls that may come out of nowhere due to the nature of the paths intersecting and interlacing.

A very familiar soundtrack was playing, the Halloween Theme. We approached a chain link fence maze in the middle of a clearing. I was very excited to see this, as it is something a little unique for a haunted corn maze. As we entered we saw another guest stalking us as we were attempting to solve the path to the exit. This was very well done and was very fun. Only a few more turns and we see a broken down bus. There were a few unruly passengers but they seemed pretty harmless. In the distance and getting louder, the Freddy Krueger Nursery Rhyme fills your ears as you get to the pallet maze towering close to 9 feet high. We encountered some other creatures, again appearing from multiple vantage points that we are not aware of.

Now approaching the zombie containment zone, we were not allowed to go together but the keeper of the gate only allowed one of us to enter at a time. This pallet / cyclone fence maze had a few obstacles in the walking path as well as some random dead ends. The ground was getting a little more damp so we may have been going downhill a bit. Entering the mid squeeze wall, you know why you don't want to miss leg day. We missed part of the path and did not know what direction we should be headed, so we made a loop around the true path, hitting the cemetery with some moderately decorated open graves.

Approaching an ominous silo we were paused as small groups were let in. Here was a very potent laser swamp. The silo was fitted with butcher flaps and kept the fog inside and the effect was very effective. The vortex tunnel was next. Stars all around us swirling to infinity, Watch your step. There is no ramp and the few steps were slightly uneven. One more cyclone maze to dash through, this was also a nice surprise due to the constricting points and the width our new route varied in dimensions.

Arriving at the end there were two standing photo-ops: A bloody guillotine and a psychopath holding a newly severed head. The latter is best for adoring couples. While posing as one of the dearly departed, a few of their actors ran over to get in on the photoshoot. That was a nice and fun surprise. Overall the experience was pleasant, a few good jump scares there were maybe just over a dozen actors mostly in costume and wearing masks. There were no animatronics or additional effects to name. It's a nice long path through the corn. If you like adventure and not on a specific time schedule this might be perfect for you.


To find out more about this event, visit:
http://jonamacorchard.com