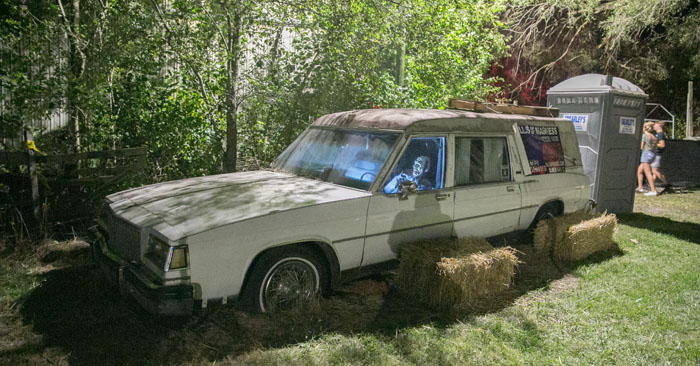 The Halls of Madness was very easy to find using GPS. The brightly lit sign along Highway 16 was also very easy to see. The hearse near the entrance also helped get my attention.

While I was there, I saw an actor or two interacting with guests in the queue line areas. There was also a concession stand and fire pit nearby. Creepy music could be heard in the main waiting area.

They did great in this category. I didn't run into any other groups in either attraction, so the groups were spaced out effectively.

This year, the Halls Of Madness featured two haunted attractions: the main house called "Halls Of Madness" and their new attraction called "Fairy Tale Horrors". Both haunted trails were contained within the same dark wooded setting. The naturally creepy atmosphere of the woods was the perfect backdrop for an event like this, with a scary backwoods theme. Imagine walking into the movie "Deliverance"; that's kind of what it is like.

The Halls Of Madness kicked off with a presentation of the rules and a short introduction to the haunted trail. Shortly after entering the dark path, there was a great scare that no one in my group saw coming. Continuing on through the woods, we passed through several small shacks and other structures that were built out of pallets and old scraps of wood. Inside each of the shacks, there were hanging nets, props and other things that you had to push aside. In each area there was also a surprise or two. Some of the more memorable themes within the attraction included a doll room, a clown area and a small graveyard.

Most of the actors inside the Halls Of Madness had high-energy performances and most of them were pretty relentless. After their initial scares, a number of the actors continued to taunt our group even after we had left the scene. The path was laid out in such a way that the same actor could (and often did) scare you multiple times by reaching through holes in walls and specially designed openings. At times, it was hard to tell where the scares would be coming from. Actors were hitting you from all angles, including up above in trees, as well as crawling at ground level.

After surviving the Halls of Madness, I got in line for the second attraction, Fairy Tale Horrors. Before entering, they reminded us of the rules. After that, an actress dressed as Little Red Riding Hood gave us a short introduction to the attraction. From her monologue, we were informed that the horrors seen inside could possibly give us insomnia. This attraction had a similar style to the previous one; however, the overall concept conveyed a twisted version of your favorite childhood fairy tales. Some of the themes encountered included Alice in Wonderland, Little Red Riding Hood, Hansel & Gretel, and Snow White & The Seven Dwarfs. There were a number of scares and surprises throughout the trail. Some of the actors utilized pop-out scares; however, there were others who were more interactive, playing out the role of the various fairy tale characters in their scenes.

The Halls of Madness crew did a great job this year. The enthusiasm and energy of their actors make this attraction very enjoyable. I like how they re-theme their secondary attraction regularly, while tweaking their primary haunt. This event is definitely a lot of fun and without a doubt, it is worth visiting. It is also a great value, with a ticket price of only $15 for both attractions. Be sure to check them out this season.

To find out more about this event, visit:
http://www.hallsofmadness.com