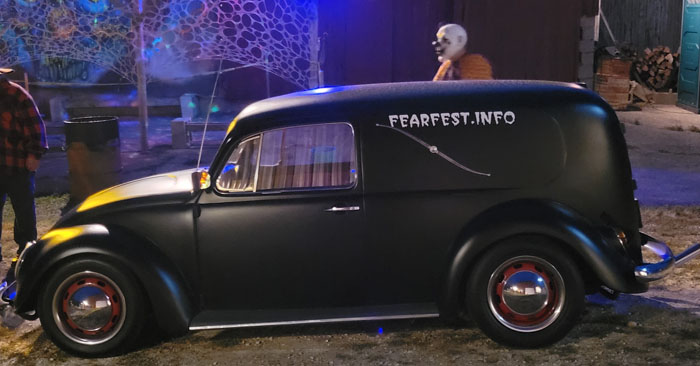 On our trip to Fear Fest we used GPS- which led us right to the entrance. There is a small (lighted) sign at the entrance with the name of the attraction. If it wasn't for GPS, it would have been easy to miss.

The parking lot is in a grass field with about a minute to two minute walk to the ticket booth. A hearse with the Fear Fest logo on it sits in the midway of the Attractions.

There was very little wait entertainment for this event. Occasionally a clown in a mask would appear and chase after a group, or stop to talk with groups waiting to purchase tickets.

This event has 3 Haunted Attractions in one location. Each attraction is $15, or $40 for all 3. The attraction does take credit cards or cash. The 3 attractions are THE HAYRIDE, BARN, and FUNHOUSE.

There was a 15 min wait to be loaded onto a tractor trailer that pulls 2 trailers (and you sit on hay bails). Each trailer holds about 30 people. Time on the attraction was 14.5 mins.

There is an all indoor waiting area for this attraction where we waited 15 mins. Our time spent walking through the actual attraction was 10 mins.

Since the show allows you to have free range of where you want to go, there are no major crowd control issues.

THE HAYRIDE: *During this attraction, several actors (mostly in dark clothing) jump on and off the wagons- whispering eerily or cracking jokes- throughout the entire ride.*
Some of the most memorable scenes here were a scarecrow with a flame thrower that distracted us, while an actor jumped into the wagon. A well designed clown midway, where a clown jumped into the wagon in several spots. And a Camp Crystal Lake scene (but unfortunately, no Jason). Toward the end of the Hayride, the attraction took us past what looked like a collection of old farm equipment and newer cars. This area was a dead zone with no actors, and no clear marking that the "attraction" was over prior to it. Overall, I would say this hayride is nice for family- friendly fun.


THE BARN: *This attraction has a lot of dimly- lit rooms, dark hallways, tight turns, and uneven floors.*
This attraction looks like an old "Hillbilly" barn on the outside, but upon entering the first (holding) room, we felt like we walked into a dimly- lit casket company/ funeral home setting. A person wearing a Freddy Krueger sweater talked to us about the weather and the people going through the barn. Once we were allowed in, we came across a room with an actor asking us to "help them get free." Seeing as no one else appeared to be around, we told the actor to come with us, but the actor simply stated "the farmer(s) will beat them and taze them if they do." A few dark hallways down, we came to another room where the actors popped in and out of the darkness into the light very well! Great job on the actor placement here! They managed to get a few startle scares from my group! More dark hallways later and we came to a spinning tunnel where an actor wearing a light up purge mask was moving about the rails as we walked past. Eventually, we came to an outside section where a Jason-like character chased us with a chainsaw. He had some technical difficulties with his chainsaw in the midst, but managed to improvise with some silly threats until the chainsaw started back up. We followed a path away from him and back inside, where we found yet more dark hallways and tight spaces until we eventually ended up at the exit.


FUNHOUSE: You enter this attraction through a brightly lit, open clown mouth, into an all white holding area (in the holding area we did notice they either left tools and ladders out that they had been using to work on the show, or they also use this area as storage). There is a coffin casket kids car with a giant gargoyle to look at in this area. An actor here talked to us about random things going on at the farm until it was our time to go in, then brought us to the first scene- which was reminiscent of a wax museum with wax figures of horror movie icons. The actor proceeded to ask us who the "real one'' was, then laughed and stated they were the only one. We continued down a hallway of flashing white lights to the next room, where an actor told us to "flip the switch" and watch them get electrocuted. Afterward, the actor stood up from the chair and asked us to take a selfie with them, then sent us on our way with a "Happy Halloween." As we entered into a Christmas scene, a clown told us a skeleton in the room was Santa, and that he had been bad- so the actor killed him. We exited the room down a hallway of bowling pins and came upon a Midway Game with Twisty the Clown- where we played a couple quick games and he awarded us a gift for playing. Twisty then guided us to the next hall, where we met the Fortune Teller (my group had the most fun in this room). The Fortune Teller had everyone in our group pick a tarot card, then gave each of us a "specific fortune." Leaving the attraction, we heard many other people talking about how cool the fortune teller was as well.

Overall, this attraction was very interactive and fun. FEARFEST is a great family- friendly/ fun atmosphere. And don't forget to stop for some home made cheese curds from the food truck while you are there!


To find out more about this event, visit:
https://fearfest.info/