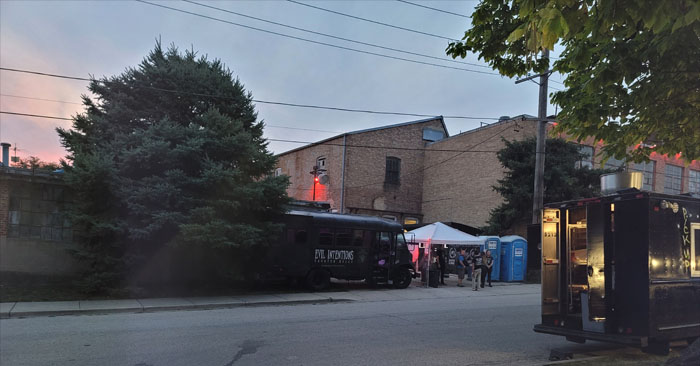 Location is easily visible from the street and has parking onsite. Parking may be more limited later in the evening. Parking is free.

Location has sufficient signage to show what it is and to ensure you are in the right place. The area has sufficient lighting to identify it is a haunted house.

While we were at Evil Intentions we did initially stand in a short line outside of the attraction where we were greeted by line actors. They also had the Evil Intentions Bus out front of the haunt playing music.

After a short wait, we were welcomed to scan our tickets and proceed into the main queue line. This area was heavily decorated to fit in with the rest of the show. Again, there were line actors present working the crowd. In this area there was also themed music playing.

Throughout the show there were some attempts at crowd control, however these were not effectively used to space groups and prevent lines forming in the attraction.

We ran into several instances where we had groups stop in front of us and had groups catch up to us from behind.

It appeared that they intentionally had built points in the show that would act to slow down groups or create spacing, however they were not adequately utilized. The flow was not smooth and we were constantly stopped as we walked through.

Being as we were here early in the night, I can only speculate on the issues being seen later in the night when they are at high capacity.

We arrived at Evil Intentions just before 7PM and saw that the location was easy to locate and there was ample signage to identify the location. Google Maps led us directly to the haunted house without issue.

On site there is a fair amount of parking. I would encourage anyone wishing to attend this show to go early as parking will become quite limited later in the evening.

Since we were early, we were requested to wait outside along the sidewalk until their box office opened up. There was the Evil Intentions bus out front playing music and a couple line actors interacting with patrons. This was a relatively short wait. Once their box office opened we presented our pre-purchased ticket where it was scanned in and we were ushered over to the main queue line.

The main ticketing area is covered and indoors. This area is themed out to match the haunted house. They had music playing along with some other fun audio tracks. Throughout the time we were waiting we were being interacted with by their line actors. Their line actors were up close and personal in many instances and they have a large variety of platforms to stand and move around on to further increase their guest interaction.

We stood in line for 14 minutes. We were here early in the night and there was minimal line ahead of us. There also is a VIP and Instant Access line that has priority entry.

After our wait we were sent into the show through some fun casket doors. Once inside we were immediately greeted by an actor who was directing us to take a seat in their elevator, which inevitably "failed" in spectacular fashion.

Instead of a brief elevator ride to the top we were directed to take the stairs up into the main show. This attraction uses multiple sets of stairs and has 3 levels.

One of the first areas we entered was heavily industrial in theme with actors on multiple levels interacting with guests.

As we continued through the show, we moved into a really fun witches forest and witches' cabin of sorts. Actors were a bit scarce in this area, but we did see a couple for some quick passing scares. This area continued through a forest scene and into what we would refer to as a demonic church. This area was well themed and we were greeted with what we would describe as the demonic priest of sorts.

This area continued on with some demonic nuns and some fun scares along the way. Once we passed through most of these figures we were presented with a sizable room with a bunch of black shrouded figures, this was quite possibly the area that presented the biggest creep factor for the people in my group. There was sort of a path through this room, however it was not very well defined. We ran into several situations where we had to kind of make our own path through this room. This made things slightly more uncomfortable because we were not sure which figures were fake or an actor. I personally didn't get any real interaction in the room by actors, but the others in my group mentioned they saw one actor in this room.

Continuing on through the show we entered a large medical themed portion of the haunt. There were ample locations for great scares, different medical offices, doctors and some other actors throughout this area. Staffing in this area was few and far between. We felt like there was a lot of empty space that wasn't being utilized by actors. This seemed to be a resounding theme throughout this show, it seems that they did not have nearly enough actors to adequately staff the show. Now this can be in part due to the current state of affairs in the world, however I feel that the number of actors was lacking.

As we continued on, we encountered another large staircase leading upstairs into another area. From what I can see this was intended to be a high school of sorts, personally I feel this didn't quite make sense given the theme of the rest of the show to this point. While this area was themed out well and had some great sets, I do feel it was a bit out of place. Our favorite set in this area was the library with the angled bookcases. This area has the potential for some great scares.

Moving through the show we found the signature Evil Intentions Casket shaped hallways which added a fun element. There were no actors in these halls however they add a nice ambiance and claustrophobic element to the show.

Once we exited out of the casket halls we entered into a large jail cell room, this room had a fair amount of actors and loud music to match. The actors have a lot of room to move around in, allowing for multiple scares by a single actor. This led into a room with plastic panel walls which was a fun addition to the show.

Throughout the show all actors were dressed and themed to their respective area, they did a great job ensuring both the makeup and costume matched the rooms they were in. There were some masked actors and others in full face makeup, again themed to their room.

The actors were energetic and ready to get up and personal with patrons, I do feel the actors did the best they could to play to the crowd with their limited numbers, however I do feel that this show is suffering due to its lack of actors and dead space in parts of the haunt. As I mentioned earlier this was likely due to the current state of the world, like most other shows this season.

From what we have seen in the past, the crew made a great initiative to fill out the new space and made a lot of changes to their sets from my last visit in 2019. You can see this show maturing and changing over the years. I do feel that some areas like the school were oddly out of place from the rest of the show and it felt like it was sandwiched between two very different and completely unrelated areas.

Throughout the show we did encounter many situations where we continually ran into the group in front of us and had the group behind us subsequently run into us as we waited on the slow moving group in front of us. They did take the time to build out what appeared to be crowd control areas in the haunt, allowing for lines to be broken up and groups slowed down. Even though these areas were present, they were not really being used effectively.

Overall, I can say that we enjoyed our visit to Evil Intentions. It is a lot of fun to see how this show will continue to evolve. They have made a lot of great strides from their first year being open up until present. I am personally excited to see what else the Evil Intentions crew has in store for us in years to come.


To find out more about this event, visit:
https://eihaunt.com/