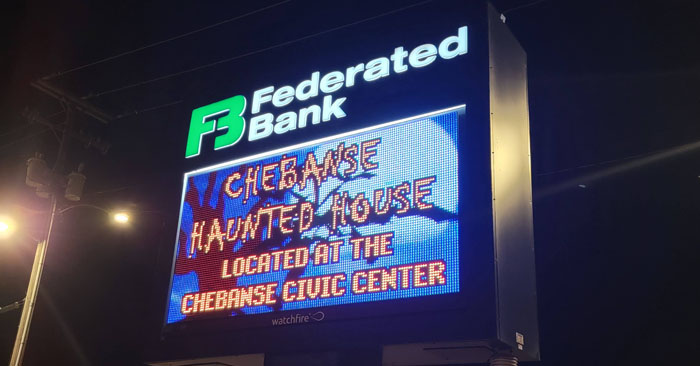 The site is actually a bit tricky to find. It is in the Chebanse Community Center, which is actually in a straight line about a mile from the I-57 exit. GPS takes you very close to this but not quite there. The building will be on the left across the railroad tracks once the GPS tells you you've arrived. There is NO signage of any kind on the Community Center itself. The only way you might know that this is where the haunt is is if you happen to see one of the roaming actors outside of the haunt.

The first time I visited this haunt a few years ago I completely missed this building and wound up having to ask where it was. There is a small downtown area before you get to the haunt and one of the local banks has a digital sign that says the haunt is in the Community Center, but again, if you don't know where that's at it's a bit hard to find.

Parking is limited, with only about 20-25 spaces or so around the building.

Wait entertainment consisted of a couple of roaming actors who moved from inside to outside and also walked through the line while people were waiting. Also, there was Halloween music playing from some speakers in the community center.

There was also a food table set up where you could get pizza, hot dogs, candy, popcorn, and drinks.

Medium - most of the scares were old school: jump scares, blasts of air, loud noises, and bangs. However, if you weren't expecting them, they were effective.

There were not many people there when I arrived so there wasn't much need for crowd control, but the entire waiting area (which was all inside) was roped off into sections so that there was a clear path to get to the ticket area. In previous years the ticket area came first and then you got in line for the haunt but this time the tickets were right before the entrance and you paid just before you went in.

This haunt is located in a portion of the Chebanse Community center that looks like it used to be offices or something like that. It is a two-level building that looks to be from the early 1900's, so the atmosphere is there just based on that alone. The haunt begins in a hotel setting where guests are welcome to check in but never check out. Visitors will definitely see other hotel guests as they pass by, and fans of the Halloween movies will be pleasantly surprised. Eventually, the hotel area leads to an elevator that takes people to a maze of twisting walls and strobe lights. Thankfully the maze is not entirely dark so you can maneuver and while there are dead ends, they are easily avoided so the experience is not frustrating. Following this there is a slaughterhouse, a jungle setting, a radioactive waste containment area and several other surprises.

Actors were mostly younger, usually with simple masks and costumes, but they were effective, popping out of various areas and following people throughout the haunt. Additionally, there were numerous sections with blasts of air, pop-out animatronics, loud noises, and pounding on walls. On the night I went there were not a lot of actors in the haunt, particularly in the maze area, which was actually empty, but the ones that were there stayed in character and did a good job.

Set design was quote good for a community haunt, particularly the slaughterhouse, hotel and jungle scenes, all of which were cleverly done and atmospheric. Also, while there were dark areas, they were never too dark or too long so as to get frustrating to pass through. It was just enough to unnerve you but not enough to annoy you.

This is another haunt that seems to last longer than it actually does. The total time inside was only seven minutes and yet it seemed much longer, which in my view is always a good thing. The bottom line: If you're looking for old-fashioned scares in a community setting, the Chebanse haunted house is it. In this day and age, where a lot of haunts are large professional ones owned by big conglomerates, the sort of mid-tier local community organization haunt (like the Jaycees haunts of old) have kind of disappeared. However, Chebanse is one that is operating and has that old school feel. This is the type of haunt that features basic scares, sets, and costumes, as well as mostly younger actors, as opposed to the elaborate sets and detailed costumes of some of the bigger haunts.

That is not at all to say that this makes Chebanse boring or dull or anything. As with all haunts, it's all about the scares and the enjoyment of it. I'm happy to say that Chebanse was a fun time and a great value for only $10.


To find out more about this event, visit:
https://www.facebook.com/ChebanseHauntedHouse