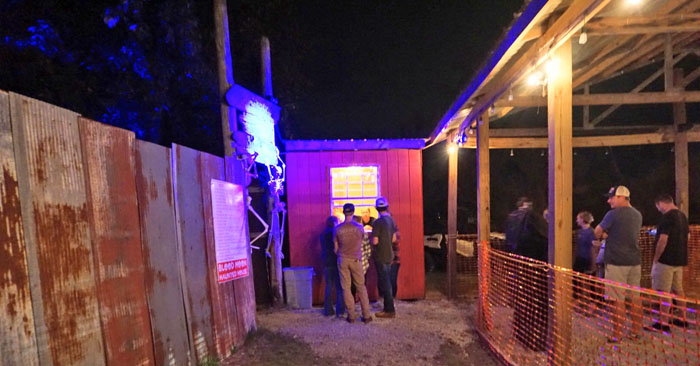 Blood Moon Haunted Scream Park was easy to find using GPS. It is located on a narrow & creepy road. As I approached the property, I saw a brightly lit "Blood Moon Haunted House" sign at the corner of the nearby intersection, so I knew I was at the right place. The brightly illuminated queue line and parking lot also drew attention to the property.

There were a couple of actors in the waiting line area who were interacting with customers. A large, covered shelter was provided to keep patrons dry in the event of bad weather. Spooky music was being played for the customers waiting in line to foster a spooky atmosphere prior to entering.

Crowd control could have been better, but this was not the fault of the venue, as I will explain. Despite us moving rather slowly, my group caught up with the group ahead of us less than halfway through the attraction. As we moved through the various scenes, the group of teens / preteens ahead of us stopped and talked / interacted with every single group of actors in every scene (perhaps they were friends of some the actors?). This delay caused us to stop every minute or so to give the other group time to move forward. Unfortunately, this herky-jerky flow adversely affected our enjoyment of the show. Kudos to a couple of the actors along the way who did their best to hold us back, separating the groups and minimizing the annoyance with some very funny and entertaining performances. We feel that under normal circumstances we wouldn't have run into anyone else, since there seemed to be significant spacing between groups.

After being given a brief list of rules, my group entered the attraction through a tall archway guarded by two skeletons. Once inside, I found that Blood Moon Haunted Scream Park consisted of many creepy scenes of varying themes. The trail we walked down was bordered by towering sections of fencing, made of both wood and steel, that were 8 to 12 feet tall. Along the long path, there were scenes set up within large steel farm buildings. At various points, there were also scenes set up outside, along the trail.

Some of the themes we encountered included a cornstalk maze, Dracula's funeral, a spider room, Meat's Slaughter House, an outdoor sheet maze, stacks of barrels, a clown electrocution, a girl's playroom, a zombie apocalypse and a Krampus attack. Additionally, there were several funeral and cemetery scenes. Most of the scenes were detailed fairly well, using colored accent lighting and appropriate sound effects to enhance the atmosphere.

There were a couple of times when actors broke character to give my group direction in a normal tone of voice, but other than that, most of them seemed very immersed in their roles and were enthusiastic about getting a few good scares from our group.

Overall, I really enjoyed my visit to Blood Moon Scream Park. It is a fun event with some great surprises along the way. With its considerable size there is a lot of walking, so wear comfortable shoes. Also, parts of this attraction are outside, so keep that in mind in case of inclement weather. If you are in the area, be sure to stop and check this one out.


To find out more about this event, visit:
https://www.facebook.com/Bloodmoonhauntedhouse