2021 Basement Of The Dead Review 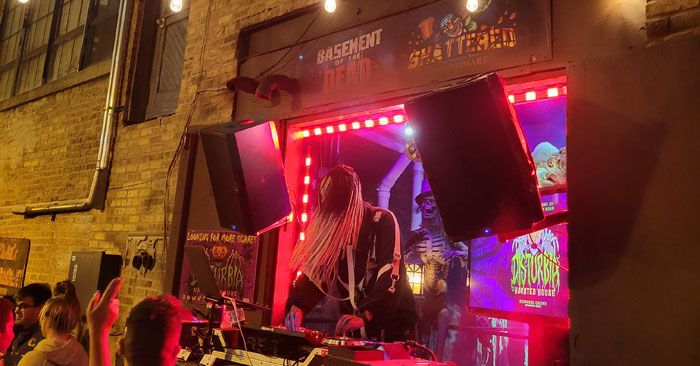 I followed my GPS to get to the location. They had a small sign pointing you toward the entrance, and an all- blacked- out little school bus with the Basement of the Dead logo on it at the street corner.

Basement of the Dead knows how to party! Between the DJ pumping beats all night long, to the random array of characters running around outside. A clown with a loud horn managed to startle a few customers standing in line around me. A voodoo priestess and snake- like character in a trench coat were weaving through the crowd. A deformed Hillbilly character with a chainsaw he kept revving. A pumpkin/ scarecrow character on stilts. And a few more characters were starting to appear outside as I was getting ready to go in with my group.

The area around Basement of the Dead has random parking, but they recommend to use the free casino over flow parking lot- located one block north of the Haunt.

The outside wait line: 1 hour and 20 mins

Basement of the Dead: 12 mins

Basement of the Dead: Medium

I was sent into the haunt with a group of 7. Going through, my group did not bump into any other groups (in either attraction). Crowd control seemed well timed and spaced.

As a precursor: This show is not wheelchair accessible. If you have a difficult time walking/ balancing and/ or seeing in very low lighting, this attraction may be difficult for you to traverse.

NOW ON TO THE SHOW:

Upon entering Basement of the Dead, my group was immediately guided down a set of stairs. When we reached the basement floor, the props and detail immediately sucked me in. Everywhere I looked, the rooms were filled with all sorts of gorey eye candy to take in. It was hard to see all of the detail in a lot of the rooms as the lighting was a bit too dark to make everything out, but there are not many "plain, black walls" here. The darker scenes also had me questioning which prop/ mannequin was actually real and which was fake- only to have an entirely different prop/ actor suddenly move from across the room. There was one scene like this in particular though where I was able to tell who the actor in the room was immediately: it was filled with mannequins of nuns standing around, and some on examination tables. The actor in this room seemed a bit out of place wearing a bloody white shirt and jeans, wielding a chainsaw.

Many of the rooms in this attraction were your general Haunted House horror themes (ex: multiple medical areas, industrial rooms, spinning vortex, etc.) and I did notice it seemed there were more props than actors as we walked through. That being said however, they did do a good job spacing the actors out between the various props- and when I say props, I don't mean your standard, boring mannequins. I mean interactive props- between TV screens playing little scenes for you, to props that jump out and try to scare you. Not to mention the moving floors in some of the scenes! Definitely keeps you on your toes.


Shattered 3D Nightmare is a totally different experience. Before entering, my group was instructed to put on a set of paper 3D glasses- and then we were immediately thrown into a brightly lit, extremely colorful, clown nightmare. The 3D glasses made everything literally come to life- popping off the walls, and even floor at you! They made good use of a lot of static, creepy clown props and spaced the actors out well between the rooms. In one scene with an ice cream truck, a female clown with pigtails came around the corner of the truck and attempted to startle my group. She seemed very into her character and was speaking, but with the loud clown music resonating through the attraction and her face mask, I wasn't able to understand what she was saying. A few rooms down, I found myself in a spotted clown room with clear dividers, creating a sort of maze that led into a spinning vortex tunnel. As my group weaved our way around the dividers, two clown girls were laughing maniacally at us- one we were walking toward, and one we thought we were passing behind. As I was focused on the clown girl in front, the one from behind suddenly reappeared and banged on the clear divider next to us- which startled one of the girls in my group. What a great distraction scare!


Basement of the Dead and Shattered 3D Nightmare are an absolute overload to the mind, and maybe even your soul. If you have a fear of clowns or the things that lurk in the dark, you won't sleep good for months!


To find out more about this event, visit:
https://basementofthedead.com