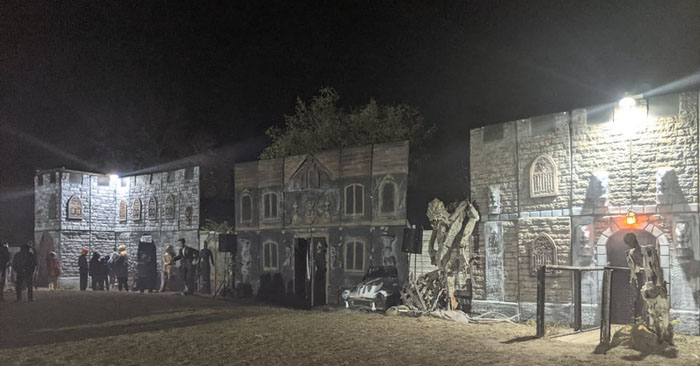 Asylum of Mad Dreams is located at the Cordova Dragway. I saw multiple entrances onto the property, and large signs pointing to the correct entrance for the haunted attraction. There was plenty of parking near the event.

My wait in line wasn't too long because I had purchased timed tickets in advance online, which I recommend doing because they were sold out for the night by the time I arrived at opening. At the entrance, I was given a number similar to being in line at the deli. While I waited for my number to be called, I saw a few costumed characters come out of the house and interact with the crowd for a few minutes. There was music playing and there was a fire pit that people were gathered around because it was a little chilly outside.

A job well done here. I didn't run into any other groups through any part of the show, and the actors did a good job of continuing to keep groups separated as they were walking through.

After my number was called, I walked to the entrance of the house. After I was given the rules of the show, another group and I were allowed entry. We immediately walked onto an elevator which toyed with my fear of falling, and then we stepped out to proceed through a couple of scenes with characters hiding along the way to another queue line.

We weren't in this line for very long before a school bus pulled up and we all piled on. The bus driver instructed us to hang on and then headed into a wooded area nearby. This bus ride portion of the show was unnerving because the turns were tight, the bumps were harsh, and the sounds of the branches hitting the sides and top of the bus emanated and echoed throughout. Rob Zombie serenaded us along the way, but not loudly enough to drown out the jump scares set off inside of the bus. The bus ride was a scary good time.

We arrived at the next portion of the show and we were ushered into holding cells. Since I visited alone, I got a cell to myself and when the performers were ready, they sent me into the house alone. I walked through several areas such as a biohazard area, catacombs with cages, and a hallway with coffins coming out of the walls. There were characters hiding along the way with loud scares. I walked into a scene where I had to witness an electrocution, and then I was instructed to put on the 3D glasses I had received at the beginning of the show. I walked through a pretty lengthy 3D area which had several loud startles and fun clown characters along the way. One of my favorite parts was walking into a clown face through the mouth and having my senses thrown off by a cool effect.

I walked outside which led me through a maze of pallets and fences and into several smaller wooden shacks with scenes inside. There was a basement door on the ground that had colored lights and fog pouring out of it, which looked really cool. A lot of characters in here were interactive and had good jump scares. I made my way through the maze and found a claustrophobia inducing area, and then an impressive industrial area with very tall factory facades and large, metal implements on each side of me. I approached a tall gothic façade and walked through the front door, which led me into a large, detailed living room/library scene in which I needed to search for the hidden exit. I found a medical area that had a unique surprise hidden on a wall, and a maze of walls that had me turned around and confused. I found a very nice and creepy mother-type character who invited me into her house and offered me dinner and more visits at a later date. I walked through her house which was full of old appliances, machinery, hidden doors, and disturbed inhabitants. I came into a creepy barn scene and I was loudly chased towards the exit.

I had a lot of fun at Asylum of Mad Dreams this year. The actors really make this show enjoyable because they are interactive and have effective scare tactics. The scenes are put together well and there are a lot of hidden exits which give the show a funhouse vibe at times. The bus ride is a unique experience that I think haunted house enthusiasts should experience at least once. I had a great time and I am looking forward to when I can visit again!

To find out more about this event, visit:
https://asylum1031.com/