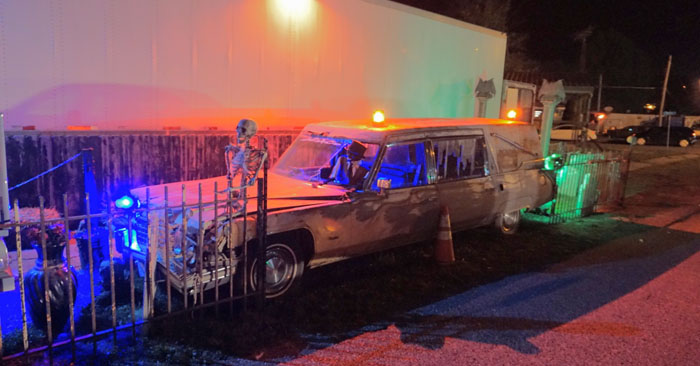 GPS took me right to the location. There was also a backlit arrow sign along the main road (Rt. 57) to let you know you were to turn.

There was a good amount of wait entertainment at 217 Terror. Upon arriving, I decided to take a picture of the sign mentioned in the "Visibility / Location" section of this review and Mad Molly, one of their main characters, decided to sneak up on me for a good scare before I even got to the entrance. A couple of other actors were working the waiting line area. Near the haunted attraction entrance, there was a hearse and a small, illuminated graveyard set up. They also had dark-themed carnival games for patrons to play, as well as an escape room.

They did a good job in this category. While walking through the haunted house, I didn't see any other groups.

After being informed of the rules by the show staff, my journey began by walking through a huge clown mouth with sharp teeth. As suggested by that entryway, the next few scenes were clown themed, complete with clown artwork painted on the walls, calliope music and of course, demented clowns. These scenes were well decorated. The narrow connecting hallways featured a lot of items hanging from the ceiling that you had to push out of the way, including severed heads, pool noodles, foam blocks and various appendages.

Some of the other notable themes in the attraction included an asylum, a mad doctor, a morgue and a crematorium. One of my favorite scenes was the "Happy Death Day" party. When offered a piece of the repulsive cake, I politely declined and moved on. The doll room was pretty creepy, featuring a music box soundtrack with dolls attached to the walls & hanging from the ceiling. Before leaving the area, there was a surprise that I didn't see coming. In a number of the scenes, strobe lights and fog were effectively used to disorient the customers walking through. There was also a nice green laser "swamp" with a great jump scare.

Throughout 217 Terror many of the rooms were fairly small, which gave the haunt somewhat of a claustrophobic feel. When actors attacked, it felt like you were trapped and had nowhere to go.

Overall, most of the actors gave high energy performances and never broke character. They were also very persistent. After leaving several scenes, I noticed the actors stalking me from room to room. This haunted attraction also used a lot of mannequins, so at times it was difficult to tell if a character lurking in a corner was an actor or a just a static prop.

I really enjoyed my trek through 217 Terror. It's a fun event with some nice scares. Check them out if you get the chance.

To find out more about this event, visit:
http://www.217Terror.com