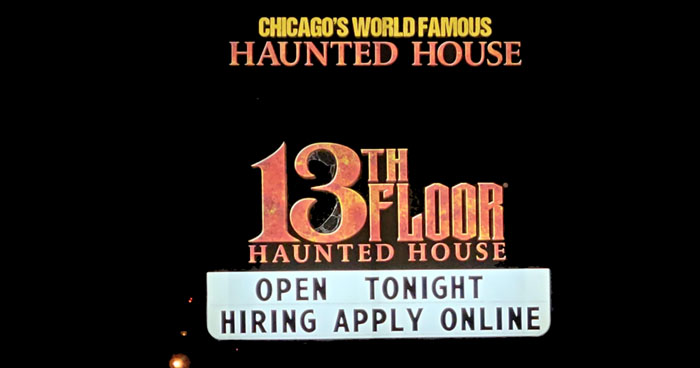 There were two actors in the first line, one was a very menacing clown, the other was a dapper gentledemon with a chain to make noise on the railings. The main waiting area inside is set up as a combination of both a church and a cemetery, and it is very spooky.

FREE, I found parking by the restaurant, and I believe there is other parking around the buildings.

Smooth. I went in with two women who did not know me, and we never caught up to the group ahead of us, which was great.

Before you walk in, it looks like the outside of an asylum, and the first several rooms indicate that. The creepiness of details in these rooms was great and really showed what a decrepit asylum would look like, including a very disgusting bathroom and after, a very gross laundry area.

It then opened up in to an industrial area, filled with both an opening to view the weirdness to the room and plenty of areas for actors to pop out at you. This led to a doctor's area, which led to a great house outdoor area, which looked like it could be a real house.

The attention to detail in some of the rooms was incredible. They had turnstiles that led to a CTA type train area which reminded me of the train stations of the recent past. They had a whole dark church area which led through a few rooms that looked like both a real church, as well as having catacombs that made you feel like you were truly underground.

They also brought back one of my favorite rooms, a room that is built on a 45 degree angle, which is very hard to walk in, and having an actor pop out at you in the room does not help with your concentration.

You can tell that they took full advantage of having a larger area by the enormity of some of their architecture. There were many areas where they created either large houses, or churches as I have mentioned, and the areas seemed very imposing. The largeness of the buildings just added to the spookiness of the rooms.

They also added some new things. They have added some very cool animatronics, including a Venus flytrap in one area, and some skeletons that would pop out that got me once or twice. There might also be a shark in there, but I will not tell you when that happens

I also thought they had a great laser room. The room was filled with fog and had lasers going through the middle of it, about waist high. The walls were a little shorter, so you did not know where to go, and the actors popping out were incredible.

Overall, I think the house was enjoyable. The attraction itself is in a new location and I think that has helped them with some of their rooms. The interior seemed larger than their previous space in Melrose Park, and it showed in some of the rooms. I do wish that some of the walls were taller, or that they had added ceilings in some areas because light bleed from different areas did not add to the mood of the house. I ended up going opening night and I feel that, while the rooms and the interior of the house itself were done well and looked great, they weren't as organized as they could be in the future. The first line seemed to be broken up by an area with ladders and extra wood, and once you went to the front area where you were about to walk in, there seemed to be confusion regarding where to stand before you walk in. Do not let this deter you from going to the house, though, for I feel this is one of the above average houses out there, and I hope that they are able to stay at this space for several years.


To find out more about this event, visit:
https://www.13thfloorchicago.com/