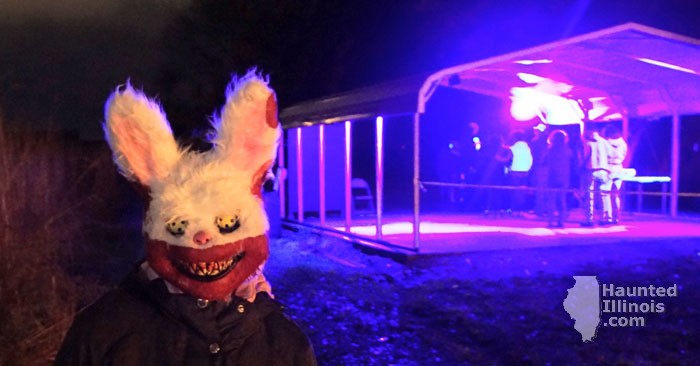 This attraction was pretty easy to find. GPS guided me to the right place. Also, along the side of the road on North Main Street (Route 26), there was a large illuminated "Walk of Terror" sign. There was another similar sign on County Road 1990, to lead you in the right direction.

There was a large tent that provided covered waiting near the ticket booth. After purchasing tickets, customers walked to another large tent where they waited to enter the attraction. The inside of the second tent was illuminated by several black lights and pop music was playing in the background. Before I approached the entrance, Mimic The Clown read me the rules.

They did a good job in this category. There were times when I heard the screams of other customers in the distance, but I never did see any other groups.

All employees, including actors were wearing masks. In all areas, social distancing was encouraged and customers were required to wear masks.

Walking up to the entrance, an employee repeated the rules, as well as informing me that there were a couple of steep hills along the trail. I later found that to be true, so if you attend, please note there is a certain amount of physical effort required to make it through the trail. For anyone having difficulty with steep inclines, they had a sturdy rope fence in each of those areas. When it was my time to go through, the employee handed me a battery-powered lantern with an orange flickering light and I walked through the entrance, which was a large monster mouth with sharp teeth.

As I walked along, the dim light from the lantern was just bright enough to illuminate the path ahead. The darkness, along with the sound of rustling leaves, crickets chirping and other night sounds, really provided a natural spooky ambience for this attraction. At other times, there was an eerie silence, which was even more creepy.

They effectively used colored lighting to accent certain areas of the woods. There were also some great sound effects along the trail.

Set up periodically along the wooded path were simple, but effective scenes. Some of the themed areas included the spider infestation, the werewolf, the scarecrow and the cemetery. The spider infestation featured a long section of the trail with spiderwebs covering the trees and bushes on both sides of the path. Standing up on a post was a human victim in a spiderweb cocoon. In this scene, there was a really interesting visual effect created by fishing line. Every 5 feet or so, there were several strands of fishing line hanging down that I had to walk through. The slight movement of each strand caught the colored lighting in such a way that it seemed like I was walking through spiderwebs. The werewolf scene started off in an empty stretch of the trail. In the background, a werewolf could be heard howling at the moon. I don't want to ruin the surprise, so let's just say that he eventually found me, striking from a location that I wasn't expecting. There was a similar attack with the scarecrow, who is fastened to a post. Again, it was a nice scare that came out of nowhere. In the cemetery, there were several small tombstones arranged evenly behind a wrought iron fence. As I walked by, fog started to drift out of one of the graves and a ghoulish character with a glowing white face approached me.

Throughout the scenes, most of the actors used pop-out scares, while others silently stalked me along the way. The dim light of the lantern did not reveal any of the actors hiding spots, so the scares were a lot more effective.

I really had fun visiting the "Walk of Terror". For a first year event, they really did a great job. While the scenes were not overly detailed, they accented the woods in such a way to create a really creepy atmosphere. At times, it did seem like I was walking through a horror movie. Also, with an admission price of only $10 for 18 minutes of fun and scares, this event is a great value. Be sure to check them out if you get the chance.


To find out more about this event, visit:
https://m.hauntedillinois.com/halloweeneventdirectory.php?d=1&mode=showdetail&id=161