2020 Terror In The Timbers Review 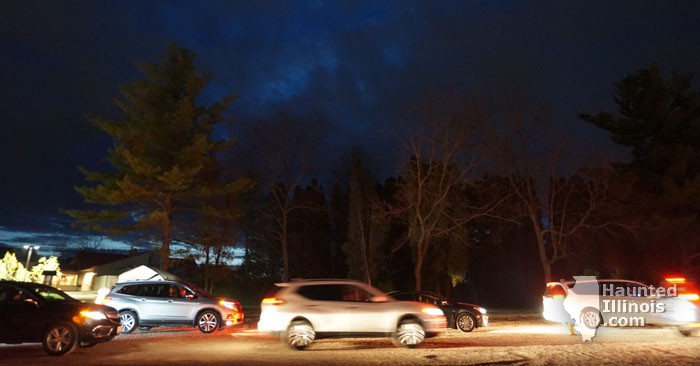 Terror in the Timbers is located just west of Randall Road on Big Timber Road. There were two large signs at the entrance, which is conveniently located at a four-way stoplight where Big Timber Road meets Tyrell Road. As we approached from the west, we could see lines of headlights on the property, which helped us confirm we were in the right place for a haunted drive through.

After we presented our tickets, we were directed to tune into a radio station for ambient music as we drove through the attraction. Other than that, we did not notice any other wait entertainment.

$65.00 per vehicle with a maximum allowance of four passengers.

Not applicable because patrons remain in their moving vehicle throughout the attraction.

There were dozens of staff members in safety vests helping direct traffic safely. In addition, each "scare zone" was either equipped with a red light/green light system, or was being monitored and managed by a traffic guard. Although vehicles were in a sort of conga line formation, the scares happening to the vehicle ahead of us were rarely seen by us and were not spoiled before we could experience them.

This event is unique when it comes to safety precautions, because it was designed around patrons staying in their vehicles as they drive through scenes. There were signs posted saying that windows and sunroofs must remain closed at all times. As far as road safety, the speed limit throughout the property was 3-5 miles per hour. There was a red light and green light system, and drivers were told to put their vehicle in park at red lights. In addition, headlights were to be on their lowest settings (like parking lights).

After we made our way through the line to get into the show, we passed by a boarded up wooden log cabin that had a sign for Holmes Murder Hotel. We followed an arrow to the left on path that was lit by tiki torches. We drove by an elaborate cemetery scene with a gravedigger. We found our first "scare zone," which was a small structure that had openings wide enough for vehicles to drive in and out of. There were strips of material covering the entrance so the vehicles behind the scare zone couldn't see what was happening inside. The red lights and green lights mentioned above were inside of these structures, so we had to keep our eyes out for those. There were several of these buildings along the path, but the first one housed a Jacob's ladder and a barrel full of guts. We passed by large containers that were lit up different colors.

We approached a pretty detailed scene with a house that was lit up by red strobe lights. There were wheelchairs and stretchers scattered around the yard, and that is where I got my first scare. We approached another structure where characters attacked our car full force. We passed by a pretty rotten jack-o-lantern scarecrow, and got startled again in the next scare zone. We saw an impressive ghostly scene near a large group of trees. The next scare zone had a classic horror movie character hiding in the darkness. We drove through a structure that was covered with toys and dolls, and we passed underneath a floating ghost outside. Shortly after that, we were startled by an actress in a ghostly gown. We passed a loud and startling scare, and we drove through an impressive display of jack-o-lanterns.

We approached an outdoor scene that looked like a campsite. There was a fire pit and dead animal carcasses in cages. The character there was very intimidating. We found a shack that was covered in spider webs and large spiders. We drove into a scare zone where an unexpected startle effect hit our window. Soon after, our car was attacked by creatures in a bat cave. Eventually, we found the finale of the show and we made our way towards the exit off of the property.

Terror in the Timbers was an interesting and entertaining experience. We were startled a few times, and many of the scenes were pretty impressive and elaborate. There seemed to be a couple of times that the red and green lights weren't working properly, but there were usually staff members directing traffic in those instances. The actors in the scare zones really appeared to give it their all, and the costumes all matched the scenes. They did a great job with distracting us and then startling us from the other direction. As the person driving the car and trying not to hit anything or anyone, I seemed to be extra jumpy at scares. Terror in the Timbers would be a great event for families looking for a fun, safe, and jump scare filled event.


To find out more about this event, visit:
http://www.TerrorInTheTimbers.com