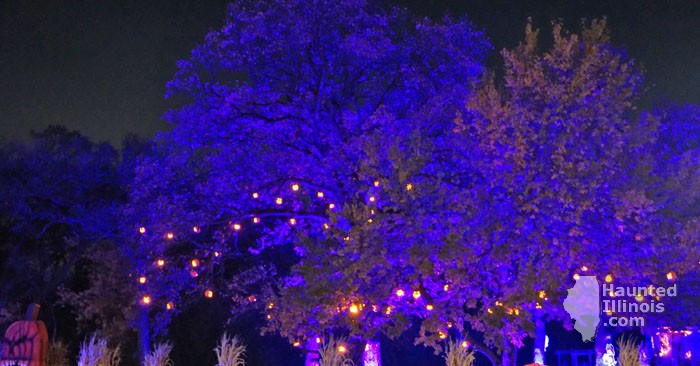 Sonny Acres Farm is located on North Avenue, or Route 64, in West Chicago. It is clearly visible from the street. Finding the haunted trail inside of the farm may take some effort. There are lots of buildings and attractions on the property, and the entrance to the Haunted Trail is tucked away towards the back of the park. From a distance, we could see huge trees that were lit up purple and they had an impressive number of lit jack-o-lanterns in the branches. When we got closer, we found the entrance to the Haunted Trail underneath the beautiful aforementioned trees.

Tickets were sold on a timed basis, so while we were waiting for our turn, we could walk around and enjoy the rest of the farm. We grabbed some hot apple cider and walked through the gift shop while we were there. We also saw carnival rides and multiple food booths during our visit.

A limited number of tickets were sold for each scheduled hayride, so group sizes were kept at a reasonable amount and there were not long lines of people waiting.

We saw hand sanitizer being offered around the property, and masks were worn by all of the staff members we came into contact with. We were also encouraged to wear masks even though the whole attraction was outside.

After we were all seated safely on the wagons, the attached tractor began its journey into the haunted trail. From a distance, we saw costumed trick or treaters running through a festive neighborhood. We passed by a pond that was lit up with different colors. We had a close encounter with a witch near her decrepit little shack. We passed some very tall and ominous scarecrows near a swamp. We could hear crows and creatures in the distance. We passed by a witch doctor's neighborhood which had several detailed shacks on each side of us.

We came across a circus tent scene and we drove through the opening in the front. Once inside, there were cages full of circus freaks and clowns surrounding us, and they taunted us as we passed through. There was an effective jump scare as we just barely escaped them. Shortly after, there was a very cool scene where eyes watched us from the trees. We found a radioactive scene full of barrels and black light effects, a semi-truck among some wreckage, and a character in a gas mask. We passed by a sign that welcomed us to "Pleasantville," and we drove past an old auto repair shop, a hotel, and a bunch of old cars and trash which housed energetic scare actors that attacked us as we passed through. We drove right through what appeared to be a voodoo ceremony, and we approached a cemetery with very elaborate gates, headstones, mausoleums and a hearse. The lighting and sets in this space were eerily enchanting.

We could see railroad crossing signs from a distance, and we eventually found train tracks. While we were stuck on the train tracks, a unique and hauntingly beautiful scare had us mesmerized for a solid thirty seconds. We then found another circus tent, which made me question whether or not it was the first circus tent we went through. There was an eerie feeling like we had been there before. We passed some farm implements that had some hardcore scares hidden in them. We drove through a neighborhood that had little houses that were all decked out for Halloween. Shadows of creepy characters passed by the windows from the inside of the homes. Trick or treaters ran in between the houses and scared us as we passed by.

We passed by a large lit sign that said "Sonny Acres Drive-In" and "CLOSED." We approached a concession stand that had a very interactive startle scare built into it. We continued on to a drive-in theater scene filled with cars in its lot. The scene that we interrupted was from a classic horror movie, and the scare here resembled a classic scene from that movie. I absolutely loved being immersed in the final scare of this show the way that we were.

This haunted trail at Sonny Acres Farm is absolutely stunning. The sets and scenery are filled with alluring details and high-quality props and animatronics. The lighting and sound effects were spot on. The actors did a great job with their timing and their scares. The special effects in multiple places throughout the show were top-notch. I would highly recommend this show to anyone looking for an immersive experience that is visually appealing and is fun to go through. I am excited to see how this attraction grows in years to come!


To find out more about this event, visit:
https://sonnyacres.com/