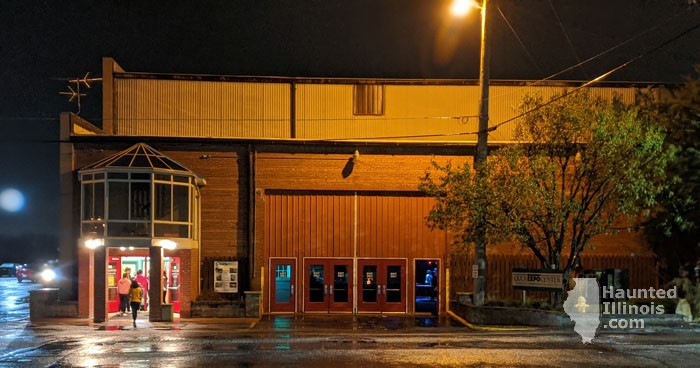 Shock House is located within the QCCA Expo Center, which is a large building where 4th Avenue meets 5th Avenue in Rock Island. The building itself was lit up very well, and there was a large lit "Shock House" sign near the entrance of the parking lot.

We saw a couple of masked characters, such as a creepy clown and a menacing scarecrow, while we waited for entry into the show.

They did a great job with this. We did not see any other patrons while we walked through the show.

As we entered the building, we saw that the admission booth had glass between the staff and the patrons. We were instructed to proceed and get our temperatures checked at the next doorway. We did that, and then we were directed to an effective socially distant wait area. Groups were organized very well in what was way more than six feet apart from each other. We saw hand sanitizer being offered in multiple places. Everyone was wearing masks and everyone kept their distance.


*Please note that these are the safety precautions that were observed by us during our visit. There may be more that we did not see, and it is completely possible that there are more precautions being taken than those that are listed here.

We approached the façade of a house, stepped onto the porch and into the front door. We were met with a massive two-story foyer scene, which really impressed me. There was a staircase, a balcony, a huge living room with a fireplace. The walls from top to bottom were intricately painted to look like a vintage wallpaper design. It was really impressive.

As we kept going, we found more rooms attached to the house. We walked through a gory kitchen, a crazy cat lady room, a detailed hallway, a nasty bathroom and a closet. We managed to make our way through a dark maze, and found a couple of scares attacking us from the ceiling. We walked through a morgue with a surprise hiding behind the wall. We found a booth where brand new 3D glasses were being laid out on a ledge under a plexiglass shield, so we took our glasses and moved into the 3D portion of the show.

We walked though a couple halls that had very cool paintings on the walls, and came into a clown area that housed a massive clown. We met a clown who startled us and did a great job of staying in character despite our out of the ordinary interaction. We saw some large spiders, some impressive skulls and faces painted on the wall, and some cool splatter effects which led into a spinning tunnel.

We enjoyed our visit to Shock House this October. The rooms were really detailed and the actors were energetic and entertaining. A couple of times, I felt like someone was following us from a distance in the winding hallways, which was really eerie. There were creepy sounds emanating from every corner of the attraction, and the lighting in all of the spaces was great for the scenes. The costumes and make-up looked good on all of the characters. A job well done by Shock House this year.

To find out more about this event, visit:
https://www.qcshockhouse.com/