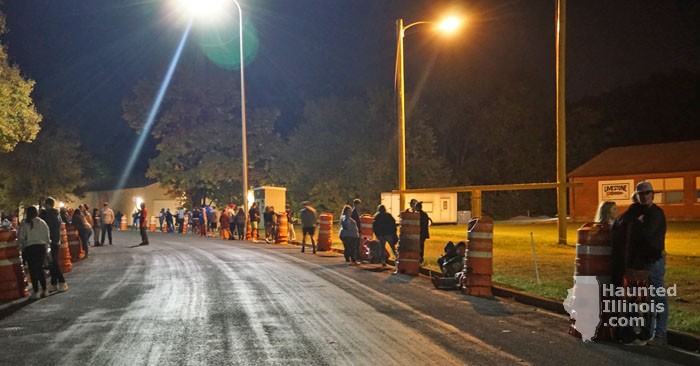 This event was pretty easy to find. Along a main road near the haunted trail there was a large flashing LCD road sign to lead you in the right direction. A long line of customers was also visible. Near the parking area, parking attendants with flashlights were there to show you where to park.

They did a good job in this category. While walking through the haunted trail, other than screams heard in the distance, I did not see or hear any other groups.

All actors and staff were wearing masks, both inside and outside of the haunted trail. Due to social distancing policies, the queue line was stretched out longer than it had been in previous years. There were orange construction barrels spaced at least 6-8 feet apart and each group was instructed to stand next to a different barrel, to ensure proper social distancing. Customers were also encouraged to wear masks.

The Old State Mine was run by the same group that had previously hosted the Haunted Infirmary in Bartonville, Illinois. Due to COVID-19 restrictions, the group decided to put together an outdoor haunted trail, instead of running their usual indoor attraction.

Once I arrived at the entrance of the trail, I was told to wait for the conductor who would show me where to go. After a moment or so he arrived and I walked behind him, following the glow of his lantern. What followed next was a collection of scenes, which were separated by very dark twisting paths in the woods. Upright pallets, wrought iron fences, wooden fences and miscellaneous props were used as barriers to help keep customers on track. Additionally, dim lights were positioned every 20 to 50 feet at ground-level along the path. I did inadvertently stray off of the trail a couple of times, so some additional and/or brighter lighting would have been helpful.

Notable areas on the haunted trail included the train crash, the circus sideshow and the blast zone. Throughout the attraction, the chirps of crickets and other natural night sounds of the woods added to the creep factor.

After the conductor disappeared, a frantic actress ran up to me and said that the train had crashed and that they could not fix it. A moment later, I encountered a circus sideshow. The ringmaster, who used a device to amplify her voice, introduced me to the scene which had large glowing water tanks and a variety of enthusiastic clowns. Before exiting the scene, there was a surprise that I didn't expect. In another area, an actor jumped over a barrier and yelled "Who let you into my blast zone?"

Throughout the haunted trail, actors mainly used surprise attacks from the darkness, as well as loud sound effects to get their scares. There were a few actors, however, who were more interactive. In various areas, creepy musical soundtracks could be heard in the background to help set the mood.

Multiple set pieces were constructed within the haunted woods, but due to the low light levels I couldn't see them that well, so I can't describe them in this review.

Despite any issues with dim lighting, they did a great job at the Old State Mine, especially considering that this was the first year that they had ever hosted a haunted trail. The actors were motivated and really into their characters. I visited them early in the season, so I'm sure that they'll get the bugs worked out as the season progresses. The event is entertaining and very affordable with an admission price of only $10. If you're in the area, be sure to stop and check them out.

To find out more about this event, visit:
http://hauntedinfirmary.org