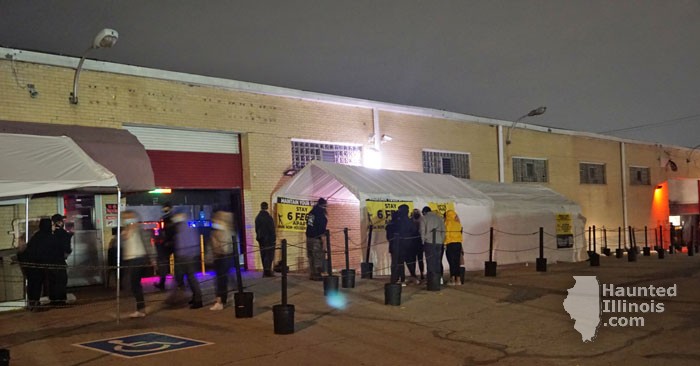 Midnight Terror was easy to find. Located along West 111th St., there was a brightly illuminated "Midnight Terror" sign along the road. Once I turned in, a couple of parking attendants showed me where to park.

They had a large white canopy outside the entrance, to protect customers from inclement weather. In the queue line area, I saw a couple of actors interacting with the patrons.

They did a good job in this category. I did not run into any other customers inside either of the haunted attractions.

Several signs were posted in the waiting line area describing the required safety protocol, including references to social distancing and mask wearing for all attendees. Due to COVID-19 restrictions, they did not have the interactive shuttle bus this year. Customers were able to park on-site. Online timed ticketing was used to limit the number of customers allowed on the premises at any given time. All employees, including the actors, were wearing masks or face shields both inside and outside the attractions. Hand sanitizer was also available for customers on-site.

Before entering the building, customers had to stop at the ticket booth to get their time verified. All patrons were also given temperature checks.

Inside the building in the queue line area, they had various enclosures constructed with 2x4's and sheets of metal grid material, to ensure social distancing between groups. Each enclosure was large enough for accommodate a small group of people and was physically separated from the next enclosure by more than six feet.

When it was my turn, I entered the first haunted attraction, which was called the "Factory of Malum". The Factory of Malum consisted of a collection of several rooms and passageways with a very consistent industrial theme throughout. A lot of the walls were textured and distressed to look like rusted metal. There were various breaker boxes and long lengths of conduit running along the walls. In some areas, there were dripping water sound effects, with rusted pipes running overhead. A couple of other common scenic elements included a plethora of rusted barrels and large water tanks. In a couple of rooms, there were cables stretched across the walls and light shining down through industrial fans, which resulted in a nice visual effect. In many areas, animatronic props were used to help keep you on your toes.

The overall actor style seemed to be, at least in part, modified to fit in with their COVID-19 protocol. A lot of the actors used pop-out scares and other employed surprise attacks, keeping their distance for the most part. Loud sounds like banging on barrels, blasts from air cannons and shaker cans were also used to enhance the scares. There were quite a few loud drop windows and effective attacks from behind sheets of Plexiglas. The addition of colored lights being activated just as the actors started to bang on the Plexiglas seemed to increase the impact of the scares in these areas. There were also a number of actors that were more passive and a few of them motioned for me to follow them into the next scene, where they then disappeared. Some scenes seemed to be missing actors, so perhaps they were short-staffed on the night that I attended.

As I entered the school, I had to dodge in and out of stacks of tables, chairs and desks. As I walked through, I could hear a bell ringing in the distance. I also had to traverse a zigzag path of file cabinets and bookcases. The next scene was a medical area, with medical equipment and crutches attached to the walls. What followed was a dentist's office featuring a patient in the dentist chair, who was covered in blood. As I entered, the dentist asked if I wanted to see something. She then turned away and started to make sounds like she was in agonizing pain. When she turned back to face me, I could see that she had pulled out one of her teeth. Her mask was bloody and the freshly pulled tooth was held tightly in a pair of pliers.

Other notable areas included the insane asylum, the pharmacy, the barbershop, the green laser swamp and the ice cream shop. Among these areas, my favorite was the ice cream shop. As I walked in, the ice cream scooper standing behind the counter asked me if I wanted a sweet treat. The counter was covered with tipped over glasses, spilled melting ice cream and pools of blood. Continuing on, I entered the freezer, which was bathed in blue light. On the shelves there were several containers of ice cream, as well as a skeleton and body parts. I also passed by a disgusting kitchen.

Some of the actors in "Black Oak Grove" use the same pop-out scare tactics as those in the first attraction; however, many of them had more interactive parts, with spoken lines. It was nice to see the contrast between the two different acting styles. In this attraction, I did see two or three actors wearing "Midnight Terror Haunted House" facemasks and quite honestly, it killed the mood in the areas where they were working. The actual actor performances were good, though. They all followed through with their roles and never broke character.

Overall, I really enjoyed my visit to the Midnight Terror Haunted House. Both attractions were highly detailed and each provide something different, to satisfy haunt fans with different tastes. If you're in the area, be sure to check them out.


To find out more about this event, visit:
https://midnightterrorhauntedhouse.com/