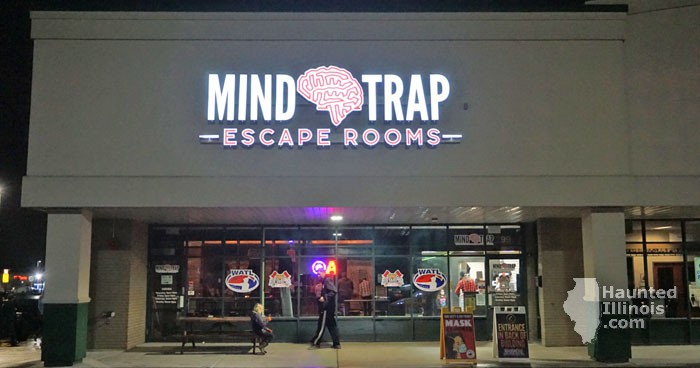 The building housing the Massacre Haunted House was clearly visible from the road, on the corner of Douglas and Montgomery, in Montgomery, Illinois. If you are approaching from Douglas Road, a bright "Massacre Haunted House" sign can be seen on the side of the building; however, if you are travelling on Montgomery Road, you will see a bright "Mind Trap Escape Rooms" sign on that side of the building, which could be confusing if you didn't know that both businesses occupy the same building. After turning in, I found that the parking lot was very dark. Additional lighting in this area would have made the entrance more visible, as well as providing an added feeling of safety for customers.

This year, there was a limited capacity indoor queue line due to COVID-19 protocols (see "Safety Precautions" section below). Outside, I saw a couple of actors interacting with customers at a safe distance.

They spaced out groups appropriately at the Massacre Haunted House. While walking through, I did not see any other customers.

Massacre Haunted House's safety protocol was clearly posted on several signs in the outdoor queue area. The queue line started outside and small groups were gradually allowed inside, to limit the number of customers inside the building at any given time. Outside the entrance, a pre-recorded message played, reminding patrons of the proper safety protocol (social distancing rules, all customers required to wear masks, etc). Once inside, there were even more signs regarding safety, as well as multiple hand sanitizer stations, which were available to customers. Before they were allowed to advance into the indoor queue line area, all customers' temperatures were taken.

The Massacre Haunted House was comprised of many highly detailed scenes. Some of the more memorable areas included the prison escape, Egyptian scene, insane asylum, mausoleum, the attic, the swamp, the clown area and their new area "The Underground".

Near the beginning of the prison escape scene, I looked in through a cloudy window to see two security monitors. Each monitor was broken up into four sections, with each quadrant displaying security footage of an inmate's cell. A siren blaring in the distance indicated that there was an escape attempt. Walking down a hallway with jail cell doors on either side, there was a surprise scare before I exited the scene.

The entire Egyptian area with was bathed in blue light and the walls were all engraved with hieroglyphic symbols. On the far wall, there was a large sphinx sculpture and the scene contained multiple mummies, Egyptian coffins and various artifacts.

The insane asylum had grimy white walls and maniacal laughter could be heard in the distance. As I walked into the area, a couple of actors saw me and scurried away, retreating to safety. One of the next hallways featured heavy steel doors that were reinforced with chains. As I walked by, the doors rattled back and forth as if someone was trying to escape. At one point I looked up to see a dirty florescent light fixture, only to be surprised by something I didn't expect to happen.

Walking into the mausoleum, there was a wall of catacombs, an organ and a group of caskets. While looking through some stained-glass windows, an actor outside of the scene made a surprise attack.

Later in the attraction, I entered a realistic attic with an angled roof. Along the winding path, dispersed amongst various trunks and other belongings, were several life-size porcelain dolls. Before exiting the scene, there was a surprise scare.

The swamp featured a very clever visual effect, utilizing fog and projected green laser light. Walking around the perimeter of the scene, I eventually descended into the "swamp", walking across a spongy floor. That was a very cool effect.

There were many other scenes within the attraction including a torture scene, a freezer with hanging dead bodies, a hallway of hooded priests, a pumpkin forest, an exorcist scene, a mineshaft, a forest, a clown scene and more. While all of these areas were visually stunning, a number of them were devoid of actors, which significantly lessened their impact.

At the end of the attraction, there was their new area called "The Underground". In the first scene there was a large Venus flytrap plant, which reminded me of the movie "Little Shop Of Horrors". Walking a little further, I observed that the plant's vines stretched all the way down a long hallway. The next room was an auto shop with the car front end and many power tools. Moving into the next area, I was prompted to enter a large freight elevator. After the doors closed, the elevator operator panicked as the elevator shook violently and we descended rapidly. When the doors opened, it appeared that we had actually moved to a completely different area. Exiting the elevator, I walked into a subway station with white tile walls. Continuing on through the turnstiles, a homeless man followed me as I boarded a subway train car. As the car moved into action, he said threateningly "This is my train. Got any change for a broke, homeless man?" As the ride ended, the train screeched to a halt and the doors opened. It was then that I walked off the train and seconds later I was walking through the Massacre Haunted House gift shop near the exit. I really enjoyed their new area, but I wish it had lasted longer and wished that the end of the show had been more climactic.

Overall, I really enjoyed my walk through the Massacre Haunted House. Although there were some quiet areas, their detailed scenes were phenomenal and the actor performances were spot on. This attraction is highly recommended. Be sure you add this haunted house to your list of visits this October.

To find out more about this event, visit:
https://FearTheMassacre.com