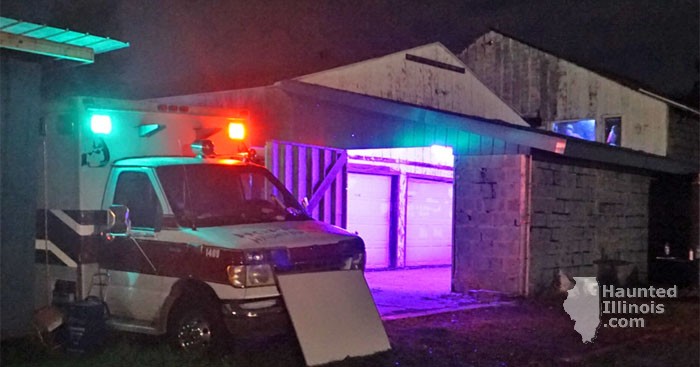 Approaching the property, there was an illuminated arrow sign near the entrance. There was also a large Hopper's sign illuminated by floodlight, as well as an ambulance on-site with flashing lights to help get your attention.

There wasn't much in terms of traditional wait entertainment; however, that was due to their COVID-19 safety protocol which is described in the "safety precautions" section below.

They did a good job of spacing out groups. I didn't see any other customers as I walked through the attraction. About three quarters of the way through, I did hear a group behind me briefly, but they never did catch up to me.

To protect their customers, Hoppers eliminated their entire queue line this year. Instead of waiting in a line, people could wait in the safety of their own cars until it was their turn to go in. After turning into the parking lot, a parking attendant marked a number “37” on my windshield with washable marker and instructed me to follow the other attendants, who showed me where to park. A few moments later, a member of the staff approached my car so that I could pay for a ticket. From there, I was instructed to wait until another staff member came by to lead me to the attraction’s entrance. It should be noted that all employees including parking attendants, staff members and actors were wearing masks. I also noticed containers of hand sanitizers on-site.

Hoppers Haunted House is an old-school attraction with a dark and gritty feel. Most of the scenes were set behind window openings set 3 feet off the ground. Chain-link fencing was also used to help separate the customers from the scenes and the actors within. There were actors in some scenes, while others just had static props and mannequins. The lack of actors in some areas allowed anticipation to build as I moved along. Walking by any given scene, I was never sure whether or not a monster would strike. The scenes themselves were of various themes and a number of them contained old broken-down appliances and furniture. Low ceilings in many areas helped to create a claustrophobic atmosphere within the attraction.

Multiple creepy music soundtracks were used to enhance the ambience and loud sounds like blowing horns & crashing barrels were effectively used as scare techniques. There were some areas, however, that were eerily quiet and at times it felt like I was walking through a horror movie. The transition between most of the scenes consisted of some very dark hallways. The entire attraction was not dark, though. In many of the scenes, dim lighting was used effectively to maintain a creepy atmosphere.

Some of the more memorable areas included the black-and-white checkerboard hallway with strobe lights, the doll room, the sideshow, the butcher shop, the werewolf escape and the catacombs. One of my favorite scenes was of a magic trick gone bad, which featured a woman sawed in half illusion that didn't end well. As I walked up to inspect the separated halves of the sawed-through box, an insane magician popped out, laughing maniacally. In addition to the indoor scenes, there were also a couple of outdoor areas, including a moderately detailed graveyard.

Most of the scares were right on target and the actors were very committed to their roles. A couple of them stalked me, while others attacked from locations I didn't expect.

I really enjoyed my walk through Hoppers Haunted House. Its old school charm and motivated actors really made for an enjoyable experience. If you are in the area, be sure to check this one out.


To find out more about this event, visit:
https://www.facebook.com/HoppersHouse