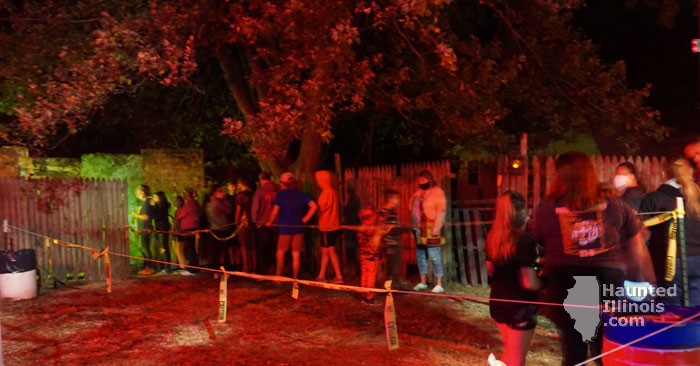 This event was very easy to find. Approaching the attraction, I saw a brightly lit "Halls of Madness" sign near the road, as well as a rotating blue light to help get your attention. After turning in, parking attendants showed me where to park.

Some of the usual wait entertainment, like multiple line actors roaming the queue line area, had been reduced due to COVID-19 protocols put in place (see details in "Safety Precautions" section below). At the entrance, there was a hearse with a decomposing ghoul in the driver's seat, as well as one costumed actor. There was also spooky music playing in the waiting area.

They did a great job of spacing out the groups. During my walk though, I did not see any other customers.

When I arrived, I saw multiple signs on-site explaining their safety protocol, both at the entrance and also in the queue line area. The entrance was roped off and customers had to have their temperature checked before entering. Also, all customers were required to wear masks. The ticket booth had a plexiglass front window with a narrow opening at the bottom, which was used to exchange money for tickets. I saw large containers of hand sanitizer and disinfectant spray in multiple areas. All employees, both inside and outside of the attraction, were wearing masks.

The tour started with the owner of the haunted attraction giving guests an introduction and stating the rules, once again emphasizing their COVID-19 safety protocol. The Halls of Madness consisted of several simple but effective scenes, separated by twisting paths through the woods. The paths were clearly defined by tall barriers made from pallets, wooden fencing, corrugated metal panels and tarps.

The crickets and other natural night sounds of the outdoors provided a perfect spooky backdrop for this event. Only 20 or 30 feet down the first path, there was a pretty impressive scare that I didn't see coming. That really set the tone for the rest of the attraction. Continuing on to the next area, I could hear screams and maniacal laughter in the distance.

In most areas, colored lighting was used to effectively accent the scenes. Loud sounds like banging on barrels were used throughout the attraction to help keep people on their toes.

Some of the more memorable scenes included the spider infestation, the scarecrow, the disgusting toilet, the zombie graveyard and the evil clown area. Of all of the scenes there, the spider infestation and the zombie graveyard were my favorites. Walking into a large area illuminated with red light and filled with cobwebs, an actress laying on a raised platform was pleading "get them off of me" (referring to the spiders). It was a very convincing performance. The zombie graveyard featured an actress in a white dress crawling out of a shallow grave, in front of a large tombstone. As I walked by, she groaned and lunged out at me.

The actors throughout the Halls of Madness were very motivated and had high-energy performances. Most scare tactics were of the pop-out variety and for the majority of the trail, the scares were executed in rapid succession.

As customers walked through the twisting path, actors were hiding in wait, inside alcoves and small wooden shacks. Other actors were crawling on their hands an knees, attacking from ground level. The scare tactics for 2020 had been slightly modified from previous years, apparently with social distancing in mind. The scares were still effective, nonetheless. Many of the actors were of the backwoods variety, which rendered memories of the movie "Deliverance". Before walking out of the last scene, there was a nice scare near the exit.

The Halls of Madness was really a lot of fun to walk through. The high energy actors and rapid-fire scares kept things interesting the whole way through. Also, at only $12 per person, it was a great value. Be sure to add the Halls of Madness to your list of visits this October.


To find out more about this event, visit:
http://www.hallsofmadness.com