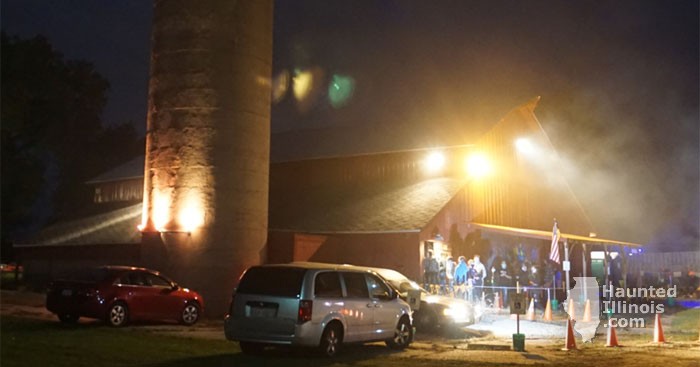 This attraction was very visible from the road. The multiple flashing lights and the fog in the air was a strong indication that I was in the right place. Also, there was an illuminated reflective sign, a glowing pumpkin and a light at the top of the pole near the entrance. After entering the parking lot, parking attendants led the way and large orange cones were set up to help direct traffic. After exiting the car, the brightly lit ticket window was easy to see.

While I was waiting, I saw a few line actors including Beetlejuice, a clown holding a spiked club and a few other clowns. Upbeat music was being played outside to help make the wait in line a little more entertaining. At one point during the night, the Beetlejuice character was dancing to popular retro tunes, while encouraging customers to join in.

During my visit, they spaced out groups in the Haunted Barn and the Creepy Carnival very well. With the exception of a few screams in the haunted barn, I didn't see or hear any other customers while I was inside either attraction. Due to the guided nature of the haunted hayride, crowd control was not necessary.

All of the staff was wearing masks, including the ticket booth personnel, parking attendants and the actors. This included everyone inside and outside of the attractions.

Social distancing signs were posted outside at several points throughout the queue line area. There were also similar signs posted at the entrance of the two indoor attractions. In these areas, there were also signs stating that customers were required to wear masks.

The Creepy Carnival was the most interactive of all three attractions.

In Madame Tussauds Wax Museum, there were famous horror movie characters standing on pedestals, stretching around the perimeter of the room. The caretaker of the museum asked me to participate in a game where I would guess the identity of each of the characters. Near the end of the scene, there was a surprise that I didn't expect.

Another one of my favorites was the fortune teller scene. As I entered the room, I saw a lady in a black dress sitting at a circular table, with a sign that read "Fortunes Told". On the tabletop was a crystal ball centerpiece along with a variety of facedown cards that were spread out evenly. The entire area was illuminated by a shimmering blue lighting effect, which added to the mystique of the scene. The fortune teller asked me to pick a number between one and ten, then she drew a card and flipped it over. After explaining the meaning of the card, she wished me a good day, despite the morbid fortune that she conveyed. From there, I moved on to the rest of the haunted attraction.

Other notable areas included the Christmas scene, the swamp, and a room of glowing dots. The Christmas scene contained many elements of the popular Winter holiday; however, it also had a horror twist with a skeleton Santa, a skeleton Christmas tree and an appearance by Sam, the character from the popular Halloween movie "Trick 'r Treat". Bordered by wooden lattice walls, the swamp was a nice illusion created by fog and a green laser projection shining down the hallway. The dot room featured glowing dots covering the walls, as well as some dots that were floating in mid-air. Before I exited the scene, the dots came alive.

Many of the areas in the Creepy Carnival were illuminated by rotating laser light effects, which really enhanced the fun house atmosphere. Although there were a few scares, this attraction was more entertaining than it was frightening.

On the evening that I visited there was a chill in the air, so it was a perfect night for a haunted hayride. After reminding customers to observe social distancing, the staff loaded several groups onto 2 large hay racks. Around the perimeter of each hayrack was a line of hay bales, so customers could sit comfortably for the ride. On the outside of the hayrack, wooden railings were built up to safely contain customers as they were pulled along.


During the ride, a John Deere tractor pull us along slowly through a dark wooded path, encountering various small scenes, each with a surprise or two.

Along the way, there were several shacks and small buildings, as well as a wide variety of static props. Some memorable themes included an evil carnival, the Grim Reaper, and a church graveyard.

Throughout the attraction, a lot of distraction scares were used effectively. While all eyes were focused on the scenes and props, actors would pop out of nowhere and attack. They were ducking in and out of the shadows at will, so it was hard to tell when they would strike next. Some of them were even hanging onto the sides of the hay wagons. Once or twice, actors even hopped aboard the wagons briefly to taunt the patrons and get some good scares.

Loud noises, chain saws and pyrotechnics were used as well. In a couple of the scenes, large flames shot up 20 feet into the air, which really got a reaction from the crowd. Another effect that got a strong reaction from everyone made the hayrack shake violently.

The natural weathered wood of the structure definitely set a creepy backdrop for this attraction. Inside the barn there were many scenes of varying themes, with twisting dark hallways used as transitions from one area to the next. Some of the scenes were smaller than an average room, but they were all effective in fostering a spooky atmosphere. In multiple areas, there was uneven flooring and strobe lights flashing, which effectively disoriented customers as they walked through.

Some of the more memorable areas included the hallway of drainage pipes, the glowing splatter hallway, the doll room and the cemetery. The hallway of drainage pipes featured a plethora of drainage pipes hung from the ceiling that I had to push my way through, in order to move to the next area. In the glowing splatter hallway, splattered paint on the walls glowed under blacklights. A visual effect made the hallway appear to go on forever and there was a surprise near the end that I didn't see coming. The doll room consisted of a large collection of small dolls, with a glass case as the centerpiece of the scene. Inside the glass case was a larger doll that resembled "Annabelle", from the popular horror movie. I don't want to ruin the surprise, but there was a nice scare in this scene, as well. Overall, the cemetery was my favorite scene inside the haunted barn. It was definitely the most detailed. After entering through tall wrought iron gates, I walked past groups of tombstones that lined both sides of the path. Before exiting, I had to walk over a rickety bridge that had red light glowing from underneath.

Throughout the attraction, there were many static characters and props. At times, it was difficult to tell the actors and the props apart, which made the actors' scare tactics more effective. Throughout the barn, there were a lot of surprise pop-out attacks; however, there were also actors who were more interactive. For example, in one scene the actor inquired if I wanted to play hide and seek. Others taunted me, as I moved through their area. The actors used buzzers, loud bangs and other sound effects to enhance their scares.

Due to the energy and enthusiasm of the actors within, the Haunted Barn had the highest scare factor of all three events at Fear Fest.

Overall, I really enjoyed my visit to Northern Illinois Fear Fest. I highly recommend adding this attraction to your list of visits this Halloween season!

To find out more about this event, visit:
https://fearfest.info/