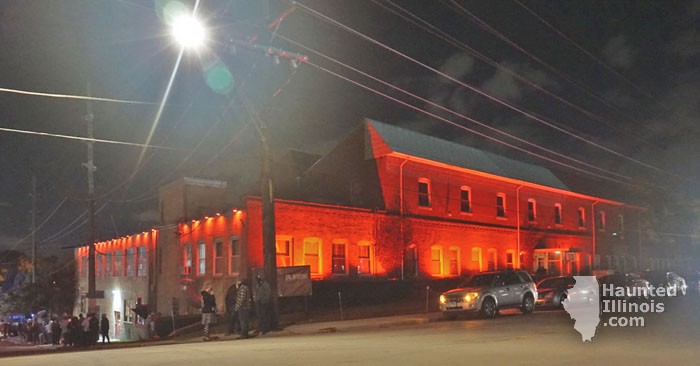 Evil Intentions Haunted House is in a large and ominous brick building on the corner of Bluff City Boulevard and Grace Street in Elgin. The building had several red lights shining upwards on the exterior walls. There was a banner on the street corner, and a bus decked out in Evil Intentions logos and artwork near the entrance. There were large signs being projected onto one of the exterior walls near the ticket booth. A hearse and a large banner were near the entrance of the parking lot, which is directly across the street from the ticket booth.

They did a great job keeping groups apart this year. We did not run into anyone else and no one ran into us.

We were able to order tickets online to avoid extra interaction on site. Our temperatures were checked upon arrival, and hand sanitizer was available. Over the loud speakers, guests were periodically instructed to keep their masks on at all times. I was informed by a staff member that someone was walking through the show periodically and sanitizing surfaces. Everyone we saw inside and outside of the show was wearing a face covering and/or mask. Groups were also being capped at 5 people at a time.

When it was our turn to enter the show, our group was packed into a coffin which was standing upright and was tucked into the wall. The door was closed and we were trapped into a very tight and dark space where we were taunted through cracks in the walls. Eventually, another door opened and we were allowed to proceed. We crept through a couple of old, dark hallways and through an old freight elevator before we found a creepy old staircase. We ascended into a multi-level playground for multiple high-energy characters who rushed at us quickly and loudly. We crept through a swamp and found an outdoor garden area, which led to a witchy wooden shack. We heard thunder and saw lightning as we crossed over some wooden bridges and found a large chapel façade. We were funneled into the chapel and we were hovered over by a towering skeletal demon. We proceeded through some hallways covered in ritualistic symbols and we found a path which was lined with tall, silent hooded characters on both sides of us.

We found a cell block area with an electric chair and barrels piled on top of each other. We walked through an office with eerie drawings clinging to the walls, and then through a room where mannequin pieces were unnaturally stuck together. We found jail cells and an intimidating warden character who had his inmates huddled in a corner from fear. We walked through a medical area with a bathroom, a surgery prep area, and a doctor's office. We followed the path which overlooked a surgical scene, and a few steps later, we were immersed in the same scene. A long hallway led us into another large medical scene that resembled a morgue. We walked up a set of stairs and we found the entrance to an elementary school. We crept through a principal's office, a library, a nurse's office, and a sacrificial classroom. All of the characters in this space did a great job conveying their stories and making it clear what role they were playing.

We entered into a large courtyard with stained glass windows lined along a tall stone structure with a tower. We walked towards a large two-story mansion façade. Fences, trees, fog and dead tree branches made this space look like we had just walked outside. We were welcomed into the mansion and we walked through a Victorian era living room and a gory kitchen. We crept through a bedroom with a creepy effect, and we found a long maze of coffin shaped walls. We cowered as we made our way through a multi-level cage where we were attacked from all directions by high-energy lunatics. Before finding the exit, we walked through twisty hallways that were made of cloudy glass so we could hardly see the characters that were watching us from the other side.

I thoroughly enjoyed our visit to Evil Intentions this year. The scenery and sets were eerily breathtaking and highly detailed, and the lighting and sound effects through the entire show were appropriate and effective. All of the characters' costumes and makeup fit their scenes very well, and everyone that we crossed paths with did a great job of interacting with us. Many of the characters were energetic and absolutely relentless. The natural esthetic of a crumbling and decaying factory was maintained in several places, which I greatly appreciate. Evil Intentions has outdone themselves yet again in 2020.


To find out more about this event, visit:
http://eihaunt.com