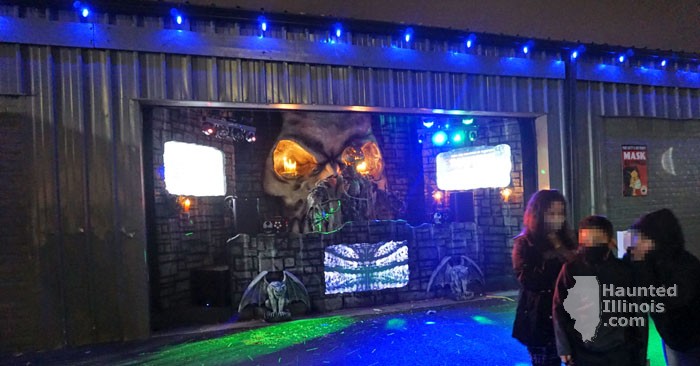 Disturbia Haunted House could be a little hard to find, if you aren't familiar with the area. It is located at the far end of long, narrow parking lot and cannot be seen from the road. After turning into the parking lot and driving a short distance, I saw a large black banner attached the side of the building that read "Disturbia" in red and orange letters. There was also a similar banner attached to the side of a bus with flashing lights. The lack of contrast between the background color of the banner and the lettering made it hard to read from a distance, especially when poorly illuminated like the banner on the side of the bus was. There were, however, flashing lights on the front of the building to help get your attention as you got closer to the attraction.

There was very loud club music being played in the outdoor queue line area by a skeleton "DJ" with a jack-o'-lantern head. Behind the skeleton was a larger-than-life skull. Near the DJ booth, there was a light show for additional ambience. On one of the large television screens next to the DJ, it said "Basement Of The Dead". Seeing the name of another haunted house so prominently displayed near the entrance might be a little confusing for customers, though. Various line actors were moving through the queue line area, to interact with customers. While not very well advertised, there were also fully functional restrooms for the customers to use.

Their outdoor queue line area was very well organized. Adequate signage was in place to separate the general admission and VIP lines. Inside the attraction, I didn't encounter any other groups while I was walking through.

Disturbia's entire queue line was set up in the parking lot and the area was roped off with only one point of entry. Prior to getting in line, customers had to stop at the check-in table, where their timed ticket was verified and their temperature was checked.

The parking lot was roped off with stanchions spaced more than 6 feet apart. Each stanchion was labeled with a number. Groups were instructed to stand next to the first available stanchion, then move on to the next one when the line moved forward. This ensured proper social distancing between groups.

Near the entrance, there was a prerecorded message playing that reminded customers of the social distancing rules and mask requirement, as well as describing how the masks needed to be worn.

The staff requested that I use hand sanitizer both at the ticket booth and also at the entrance of the attraction.

The tour started as I entered the building and walked into the rules room. It was there that I was greeted by a tall corpsified animatronic skeleton. Swinging a staff that was adorned by a glowing lantern, the skeleton conveyed the rules of the haunted attraction.

Moving on into the haunt, I walked through several areas that had a graveyard theme. In the first scene, I walked into a mausoleum underneath a tall stone archway. As I made my way through the scene, a creepy grave digger was scraping his shovel across the floor, which made a very unnerving noise. Crypt doors lined the walls and I had to traverse a zigzag path between several burial vaults, in order to get to the next area. Later on, I encountered another gravedigger holding a flickering lantern who warned me not to go any further. This area also included a twisting path through a few hallways where skulls were embedded in the walls and burlap fabric was hanging from the ceiling, to further accent the scene. I also heard crickets chirping and a grandfather clock chiming in the background. Before exiting the area, I encountered a twisting path of catacombs which were illuminated from the inside. In another area, a huge 12-foot-tall animated skeleton stood up, talking in a booming, low pitched voice. While I was focused on the skeleton, a surprise came out of nowhere.

Walking a little further, I found my way to the front porch of a backwoods shack. One of the hallways that I had to walk through was constructed of widely spaced, weathered boards and I had to duck underneath strips of burlap cloth that were hanging from the ceiling. As I walked through, the walls on both sides of the hallway tilted back and forth. I then walked into a disgusting kitchen, where "Tiptoe Through The Tulips" was playing on a vintage radio. In the room, there was a grimy table, stove and countertop. Passing by the bloody refrigerator filled with body parts, I encountered an ominous actor who said "Here, piggy, piggy! I'll carve you up real nice!" There were also a couple of animatronic props in this area. In another similar scene, there was an old shack with a banjo, ropes, chains and pulleys hanging from the walls, along with some old tires stacked up in the corner of the room. As I walked through, I could hear banjo music playing and screams in the background.

Walking up a ramp, I entered the green laser swamp, which was a visual effect created by green laser light shining through a room filled with fog. Unfortunately when I went through, there wasn't enough fog to conceal the scares. As I walked in, I could clearly see the animated prop and its mechanism well before it activated, which ruined the scare. In the middle of the scene, there were a few bodies and skeletons hanging from the ceiling. Due to the special-effects mishap, I was able to escape the scene unscathed.

One of my favorite areas in the house was the pumpkin room, which featured dozens of glowing jack-o'-lanterns embedded in all of the walls. Along the back wall, there was a huge animated pumpkin creature, built out of multiple stacked jack-o'-lanterns. Its glowing mouth moved in sync with its voice. As I walked by, the pumpkin creature emitted a deep, guttural laugh that kind of reminded me of Jabba the Hutt. Before I exited the scene, there was a great distraction scare that took me off guard.

Other areas in the haunted attraction included the haunted forest, the freezer, the nursery and the medical area. The majority of these scenes were highly detailed and visually appealing. The acting style within the haunted attraction was of the pop-out and retreat variety. Other actors were more passive, staring me down as I passed by. In addition to the actor's scares, there were a lot of animatronics and loud sound effects to keep your on your toes.

I had a good time walking through the Disturbia Haunted House this season. In terms of detailed and interesting scenes, they have a lot to offer. Be sure to check them out this year.

To find out more about this event, visit:
https://hauntedhousedisturbia.com/