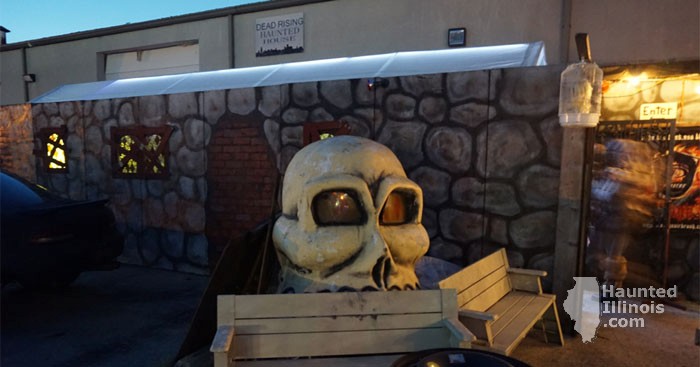 D.E.A.D. Rising Haunted House is located behind Crestwood Center, a strip mall on South Cicero in Crestwood Illinois. There was a large D.E.A.D. Rising sign on the shopping center pillar near the road. It would have been easy to see during daylight hours; however, when I arrived in the evening the sign was not illuminated so I nearly missed the turn. Upon entering the parking lot, a backlit "DEAD Rising" arrow sign was clearly visible, pointing you in the right direction. Outside the attraction near the ticket booth, there was a brightly lit tent where they were selling haunted house T-shirts and custom art pieces.

Since it was so early in the season, there really wasn't a long line and therefore no real need for wait entertainment. On my short walk through the parking lot, though, I did encounter a beastly character with a spiked back who was carrying a skull staff, as well as an amusing clown.

They had an outdoor covered waiting area to keep people dry in case of inclement weather. During my brief wait under the tent, I noticed blacklights randomly flickering, as well as music playing in the background.

The D.E.A.D. Rising’s COVID-19 safety protocol was clearly posted on a gate near the entrance of the haunted attraction.

Inside the covered outdoor waiting area, neon green lines were painted on the pavement in a 6-foot square grid, to help customers maintain social distancing while they waited in line. Before entering the haunted house, customers were offered an abundant amount of hand sanitizer (both alcohol-based and alcohol free).

Throughout the attraction, all of the actors were wearing masks and in many cases, they were cleverly camouflaged to blend in with the actor’s/actress’s costume. Some of the masks were plain, while some were airbrushed to match the character’s features. Others were hidden behind another mask. There were also some clear plastic masks used, so you could see the actor’s makeup.

Since there was not a long line on the night that I attended, I can't comment on how well they would have handled a larger crowd; however, while I was there, they adequately spaced out the groups. On my trek through D.E.A.D. Rising Haunted House, I didn't run into or see any other customers.

The tour started as I walked down a corridor filled with fog. A short time later, I was prompted to step into a Hellevator. For those unfamiliar with these contraptions, a Hellevator is a small room that you step into that uses motion, lights and sound effects to simulate a trip in an old elevator gone wrong.

From there, I moved on to the chapel, where I was instructed to sit in one of the pews. The satanic priest at the pulpit conveyed the rules of the haunted attraction, while a girl in a white dress holding a demonic doll stared me down from a far corner of the room. Before being allowed to leave, I was offered more hand sanitizer to cleanse me of my sins.

Accent lighting, music, sound effects and fog were effectively used throughout most of the scenes. Some of the more memorable areas included the mine shaft, alley, boiler room, insane asylum and a backwoods shack.

The mineshaft featured 4 x 4 wooden support beams, along with textured walls. The backwoods shack was the most elaborate area consisting of a number of consecutive rooms. Starting in the living room with the staticky TV, my group continued into a disgusting bathroom, dirty kitchen and dining room with a disemboweled corpse laying on the table. The demented actors in the scene offered me a taste of meat, but I politely declined, as one of them violently chopped at the body's torso with a meat cleaver.

At one point, I went down the twisting dark hallway which seemed to go on forever. After that, there was a complete transition which transported me into a blacklight-lit corridor with glowing artwork. In this area, there was a funny clown taunting me and encouraging me to move faster along the path.

After that, I entered a circus midway with two perky clowns. One of them introduced themselves as "Bummer". While in this scene, I had the opportunity to play a game of "Bummer says", which was similar to "Simon says". It was very interactive and fun.

That is one of the things that I really enjoy about the D.E.A.D. Rising Haunted House... Its interactive nature. As I moved along through the different rooms, the actors did their best to start a dialogue. While this may not be the most frightening haunted house in existence, it is definitely very entertaining.

I really enjoyed my walk through the D.E.A.D. Rising Haunted House. Overall, I really had a good time at this attraction. The old-school charm and interactive nature of this event definitely made it worth going to. Be sure to add this to your list of visits this October.

To find out more about this event, visit:
https://deadrisinghauntedhouse.com/