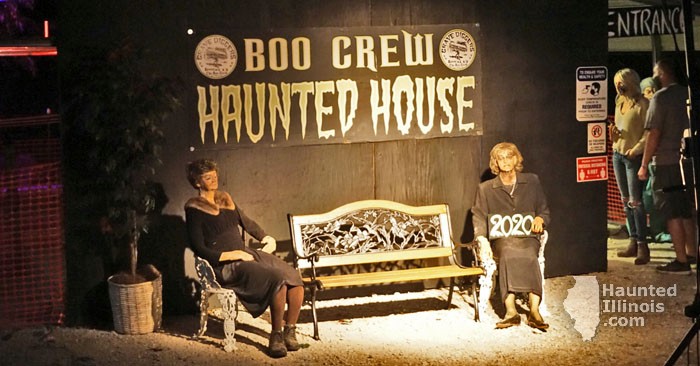 Boo Crew was very easy to find. Along the main road, there was a highly reflective orange sign pointing to the entrance and in the main parking lot area there were a number of orange construction barrels with flashing lights on top, to get your attention. After turning in, several parking attendants with flashlights showed me where to park.

Near the parking area, there was a sizeable fire pit surrounded by a large circle of chairs, so customers could sit down, relax and stay warm. Before entering the haunted attraction, patrons could take advantage of a new 2020 photo op area that included of a couple of static characters and a bench where they could sit and have their picture taken. Customers then moved into to a large covered waiting area, prior to entering the haunted trail.

Before entering the haunted trail, customers were led into a dilapidated shack with old weathered beams and a jagged tin roof. Inside this structure, there was a CGI presentation conveying the rules of the attraction. The time spent inside this "rules shack" resulted in groups being spaced out rather well. On my walk through the trail, there was only one time when I encountered other customers. About halfway through the trail, a frightened group of teenagers caught up to me. After letting them run ahead of me, I didn't see any other groups along the rest of the trail.

Throughout the queue line area, there was ample signage describing the required safety protocol and conveying the rules about social distancing and mask wearing. Within their new covered outdoor waiting area, social distancing of groups was being strictly enforced. Both inside and outside the haunted attraction, I noticed that all staff and actors were wearing either masks or face shields.

The tour through the haunted trail began with a flourish, as customers descended through the fog, out into the wooded area. As I started my journey, screams and various other sounds could be heard in the distance. Throughout various areas on the trail, colored accent lighting, strobe lights, fog and custom sound effects were effectively utilized to establish a spooky atmosphere.

Some of my favorite scenes on the trail were the clown area, the barrel barrage, the cemetery, the werewolf, the spider bridge and the vampire attack. Walking into an area illuminated by multicolored rotating lights, I saw a brightly colored clown, as well as a rusty pick-up truck and other random props distributed on both sides of the path. Shortly thereafter, a group of clowns came out of the shadows to attack, making a loud banging and rattling sounds as they stalked me through the rest of the scene. In another area there were tall vertical stacks of barrels, spaced out a few feet apart. Hanging between each stack was dark netting so I couldn't see into the next area. As I entered the twisting path, the stacks of barrels began to shake back and forth. At the end of the scene, there was a nice surprise that I didn't expect. A little further down the trail, I walked up to a large stone sign engraved with the words "Buckhart Cemetery Est. 1865". The detailed cemetery consisted of a plethora of engraved tombstones, with a tall monument as a centerpiece. The entire area was bordered by wrought iron fencing and I could hear ghostly moaning in the background. As I walked by, the monument came to life. Moving on, I walked into an impressive mausoleum with backlit stained-glass windows near the entrance. Inside, there was a blood fountain, caskets, urns and a hallway of catacombs. At the end was a scare that was not only effective, but very claustrophobic as well. In another section of the trail, I walked into a very dark area. It was then that I heard distant growling sounds. After walking another 20 feet or so, a werewolf attacked. The spider bridge featured a covered bridge built of weathered wood, which was illuminated from within by flickering lanterns. Moving closer, I could see that the bridge was inhabited by huge, six-foot long spiders. Their realistic leg articulation, along with the chattering sounds they emitted, were very unnerving. As I made my way across the bridge, a girl with a rotting face in a long black dress & veil said "Come play with my spider friends. They are quite fun!" Before escaping, I saw the skeletal remains of one of the victims draped across the ceiling beams. In another section of the haunted trail I saw a few toe-pincher coffins propped up along one side of the path. On the other side, there were a couple of glowing lanterns. Examining the scene closer, I could see a horse-drawn carriage being pulled by a rotting and decomposing horse. As I walked by, there was a fantastic scare. I don't want to ruin it for anyone else, so I will not describe it in this review. It is something that you have to see for yourself.

Throughout all of the areas on the haunted trail, the actor scares were on-point and none of the actors broke character. In a number of areas, the actors used ramps and platforms to make their scares more effective and larger-than-life.

Overall, I really enjoyed my trek through Boo Crew Haunted House's haunted trail. When I first heard that they were going to eliminate their usual indoor haunted house for 2020 and only run the haunted trail, I wasn't sure what to expect. After walking through this season, I was pleasantly surprised. It was very entertaining, with many scares along the way. They really stepped up their haunted trail this year! I highly recommend that you add this event to your list of visits this Halloween season.


To find out more about this event, visit:
http://www.boocrew.com