2020 Basement Of The Dead Review 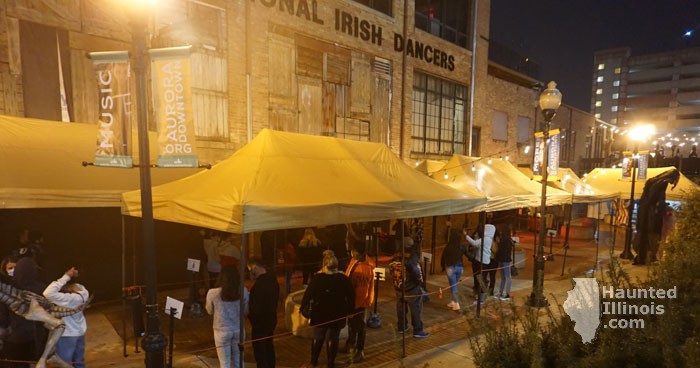 GPS will take you right to this event; however, it is not visible from the road. If you are not familiar with the area, this attraction may be a little hard to find.

Basement of the Dead had several large canopies set up outside, to help keep customers dry during inclement weather. In the queue line, there was a DJ spinning tunes to keep people entertained. There were also several line actors interacting with patrons, while maintaining a safe distance.

There is free street parking in the general vicinity of the casino near the event; however, an empty spot may be hard to find. If you have to park in the casino parking lot, there is an extra fee.

They did a great job of spacing out groups. Walking through both attractions, I didn't see any other customers.

The Basement of the Dead used time ticketing, which limited the number of customers that could be on-site at any given time. This year they had blocked off some entrances, so all customers were routed through a single point of entry, where they would be evaluated at a check-in table. After each customer's temperature was taken and their ticket time was verified, they were routed into the appropriate waiting line. At several points in the queue area, there was signage reminding customers about proper social distancing and the requirement that all customers need to wear masks. Near the entrance, there was a prerecorded message playing, informing customers of the required safety protocol. All of the staff (including the actors/actresses) were wearing masks or face shields, both inside and outside of the attraction. There were also hand sanitizer stations near the entrance.

Basement of the Dead:

Upon entering the Basement of the Dead, I immediately descended down a flight of stairs to walk through a twisting path of mannequins, which were illuminated by a slowly flashing strobe light. What followed was a group of scenes of various themes which included "Hell", multiple medical areas, a zombie apocalypse, a morgue and more.

The first hellish scene routed customers along a circular path, which was bordered by red glowing "stone" walls. As I made my way around the passageway, the actor in the scene said "Welcome to Hell. Enjoy the ride." I don't want to ruin the effect, so I'll just say what happened next was a truly moving experience. The various medical scenes included medical equipment, mad doctors and unfortunate patients. In one of these scenes, there was a disemboweled body on a table. As I walked through, the nurse, who was wearing medical scrubs and a facemask, stared me down. When I walked through the zombie apocalypse scene, I encountered multiple zombies, but I was able to escape unscathed with minimal effort. In another area, there was a morgue cooler illuminated by blue light. Some of the compartments were open, revealing dead bodies with toe tags. The doll room featured several shelves filled with dolls. Walking through the scene, I also encountered several life-size porcelain dolls. There was also an insane asylum with a hallway of padded walls and a flickering fluorescent light fixture above the area. In the background, a siren could be heard, suggesting that there had been an escape. Toward the end of the attraction, there was a devil worshiping scene that was phenomenal. Several nuns surrounding a coffin were conducting a ritual of some sort, while a demon stood at the pulpit. While walking through this fog-filled area, chanting could be heard in the background.

This year it seemed like there were more animated props and fewer actors than I had seen in previous years. Many of the actors in the attraction were tucked behind barriers or large props. I am assuming that was done to maintain a safe distance between them and the audience. For example, in the doll room, an actress reached out at me from behind a baby carriage. Drop windows were also utilized effectively throughout the attraction, as well as uneven / textured flooring to keep customers off-balance.

Before entering Shattered 3D, I was asked to use hand sanitizer and pick out a pair of 3D glasses to wear. Inside the haunt, there was a lot of glowing 3D art on the walls, primarily of creepy clowns. Throughout all of the scenes, creepy carnival music and maniacal laughter could be heard. They made good use of many static clown props, which were very realistic. Sometimes, it was hard to tell the difference between the props and the actors. Most of the scare attempts in this attraction were remotely initiated. There were a few drop windows and air blasts used for startle scares. For the most part, the actors employed pop-out surprise attacks, quickly retreating to their hidden locations shortly thereafter. One exception was in the dot room, where the actress followed me through the entire twisting path, banging loudly on the Plexiglas panels that were set up at regular intervals.

I really enjoyed by trek through Basement of the Dead and Shattered 3D. Their sets were visually appealing and the show was very entertaining. Be sure to check them out this year.


To find out more about this event, visit:
https://basementofthedead.com/legend/