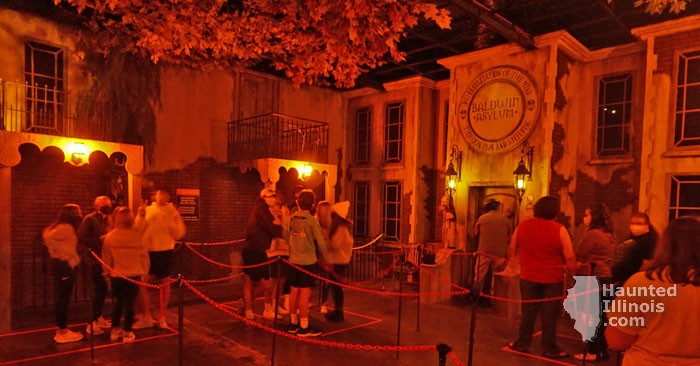 Baldwin Asylum is set back off of the road quite a distance, so the building isn't easy to see. With a large dark parking lot between the attraction and the road, you could possibly miss the turn. On the outside of the building there was a large illuminated vinyl banner to help get your attention, once you get closer to the building.

The impressive two-story tall façade in the indoor waiting area help set the mood for customers waiting in line. Other than that, I didn't see much for traditional wait entertainment due to safety protocols they had put in place (see "Safety Precautions" section below).

They did a great job of keeping groups spaced out properly. I did not see any other customers inside the attraction.

Baldwin Asylum had put in place a very comprehensive safety protocol. First of all, all staff members, including actors, were wearing latex gloves and masks.

All tickets were purchased online and timed ticketing was used, to limit the number of customers that were on the property at any given time. As customers arrived, they were sent to a COVID-19 screening station outside of the building, where an evaluation was conducted. Customers' temperatures were checked and they were asked health-related questions. After that, they were prompted to use hand sanitizer, then put on a pair of plastic gloves.

Inside the building in the queue line area, there were orange rectangles taped out on the floor, spaced out 6 feet apart, to ensure proper social distancing. Groups were instructed to stay within the taped-out spaces and when one group moved forward, they would move into the rectangle vacated by the previous group.

Throughout the attraction, several portable fans were used to keep air circulating through the various scenes. There were also larger fans used to blow fresh air into the building, as well as circulate it out of the back side of the building.

Starting in the indoor queue line area and continuing through the rest of the haunted attraction, Baldwin Asylum had some very detailed scenes. While walking through, some of the most memorable areas included multiple medical scenes, the radioactive accident, the cemetery, Hell and a red/white stripe maze.

The tour started with groups walking through a medical waiting area that had a nice surprise scare. The other medical areas featured crutches, syringes and other medical paraphernalia attached to the walls. There was also a wide variety of medical equipment, ER lighting and related props, to add to the realism of the areas. In one room, there were patients laying in hospital beds, with nurse standing in between them. As I walked through the scene, she stared me down. Other medical related scenes included gruesome surgery, medical accidents gone wrong and autopsies. The scenes were well detailed and believable.

The radioactive accident featured a nice visual effect, using green laser light shining through fog, to simulate customers walking through a radioactive fog. In the same area, there were barrels leaking radioactive waste and radioactive caution signs were posted on the wall. While walking through, there was a surprise scare involving multiple barrels, followed by an actor who seemed to come out of nowhere.

I walked into the cemetery through a tall, decorative iron archway. Looking around, I saw a plethora of tombstones, as well as numerous zombies. In one corner, I was surprised by the appearance of a werewolf. I continued on through a hallway with hundreds of skulls embedded in the wall. The area was illuminated by a strobe light, which was a little disorienting. Before exiting the scene, I had to traverse some tricky unstable flooring and walk through a propped-up casket, in order to continue to the next area.

To enter the Hell scene, I had to duck down underneath the low archway of a leaning building. Passing by a 6-foot-tall picket fence, I encountered a creepy nun who was standing on a tall platform. After that, I followed a zigzag path through various wooden structures built out of crisscross boards. The entire area was illuminated by red floodlights and low-pitched chanting and guttural growling sounds could be heard in the background. Moving into the next room, I saw an upside down cross and an evil Priest standing at a pulpit. Before leaving the scene, there was a great scare by an actor, who at first glance appeared to be static prop.

One of the larger areas within Baldwin Asylum was the red/white vertical stripe maze. In previous years, this maze had vertical hanging rubber strips to block the view of subsequent areas, making the path very hard to navigate. This year, due to COVID-19 restrictions, all of the rubber strips were rolled up, thus making the path forward much more obvious. Unfortunately, this area was completely devoid of actors, which made it rather uneventful. The addition of an actor or two would have greatly increased the impact of this area.

In general, there was a mixture of acting styles, some of which may be related to their COVID-19 protocol. Many actors effectively use pop-out scares, briefly striking out but also maintaining their distance. In other scenes, the actors were more passive and either didn't approach me or stared me down, as I passed by. Either way, though, there were a few great scares, and the costuming & makeup were top-notch.

Throughout Baldwin Asylum, they made great use of accent lighting, uneven flooring and appropriate sound effects/musical soundtracks. There were also various areas where customers had to exit the scene in an unconventional way, such as walking through an upright coffin or ducking down through a low opening in a wall. These elements all added up to make my trek through Baldwin Asylum even more fun and interesting.

I really enjoyed my visit to Baldwin Asylum. Despite the challenges this year provided, they still put together a must-see show with some great scares. You should definitely check them out this season!

To find out more about this event, visit:
https://www.slayervilleproductions.com/