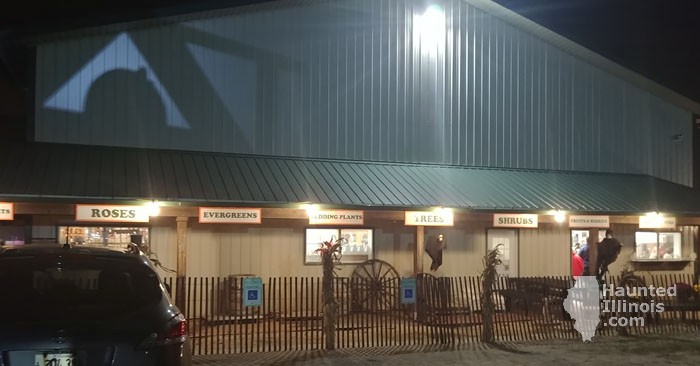 The haunt is easily visible from the road as it is in a landscaping center and there is nothing else in the vicinity. There is also a large lighted sign advertising the property.

As this is a landscaping business, the wait entertainment was slightly different than a standard haunt. There was one actor dressed as the Frankenstein monster who stood in different places and interacted with guests, as well as a woman pushing a fake old lady in a wheelchair who popped up and scared guests. While waiting for the zombie paintball or the haunted trail, visitors could pet and feed goats, do some axe throwing, get some food, look around inside the landscaping center, or simply sit by a fire pit and keep warm.

Visitors all have to check in for each event and then they get called in groups, so there is no problem with groups running into one another. However, there is no indication as to how long the wait will be when one purchases tickets. Visitors don't find out the wait times until they check in in front of the zombie paintball area. When we visited, our wait time was 45 minutes to an hour and we got there early on a Sunday night. For those coming later, there could be a wait of a couple of hours.

This event is not actually a haunted house, even though there is a haunted trail on the premises. The main attraction here is the zombie paintball, which consists of a ride on a tractor-pulled hay wagon where visitors use paintball guns to shoot at actors dressed as zombies in various scenes. For the $23 price visitors get 80 rounds of ammunition to shoot at the zombies. The ride includes five different scenes, including a cemetery, abandoned mine, a small house, and a final scene featuring zombies popping out from behind various scenery pieces. Other than the final scene, only one or two zombies appear, whereas in the final scene there are four.

There is no scoring system, nor any specific amount of shots that kill the zombies. Rather, people simply shoot at them until the actors playing them decide to fall. The last scene is meant for everyone to use up all of their remaining bullets, and visitors are told to do this even though the zombies may fall down. Thus, there is no competitive aspect to the zombie paintball, nor any real sense of doing anything, other than perhaps the visceral thrill of shooting a gun at a zombie. For people who are into this kind of thing it may be enjoyable, but personally I found it rather boring and certainly pricey. Perhaps if there was some skill involved (like needing 100 head shots to "kill" a zombie) then there might be more of an enjoyment factor, but waiting for an hour and paying $23 to shoot at a handful of zombies for nine minutes doesn't amount to a lot of fun in my view.

On the other hand, the haunted trail was done well. It consisted of numerous well decorated scenes, including a doctor's lab, a child's bedroom (complete with Freddy Krueger), a cabin filled with snakes, a cannibal BBQ, a clown area, a crashed plane, and a very cool area where visitors entered through an actual wardrobe and found themselves in an area of green lasers and fog. Along the trail visitors were accompanied by the gatekeeper, a hooded figure with a lantern who leads the visitors along the trail and offers his own entertaining deadpan statements.

Scares are primarily of the jump variety, although some of the actors do follow you from scene to scene or cut in between scenes and show up elsewhere. The natural landscaping is used to good effect, and there is enough variety to keep people interested. Scares are pretty low, though. The only drawback here, as with the paintball, is the length. The trail is only nine minutes long, which is not that great for the $16 dollar price. If you can get past that, though, it's not bad.

Overall, Undead Acres does provide a nice atmosphere for people to visit, including some good food selections and a nice fire pit to sit around while waiting. However, the short attraction duration coupled with the high pricing and potentially long waits make it less of a good value. While I enjoyed the atmosphere and the haunted trail, I wouldn't necessarily recommend it unless you're really into the zombie paintball thing.

To find out more about this event, visit:
http://www.undeadacres.com