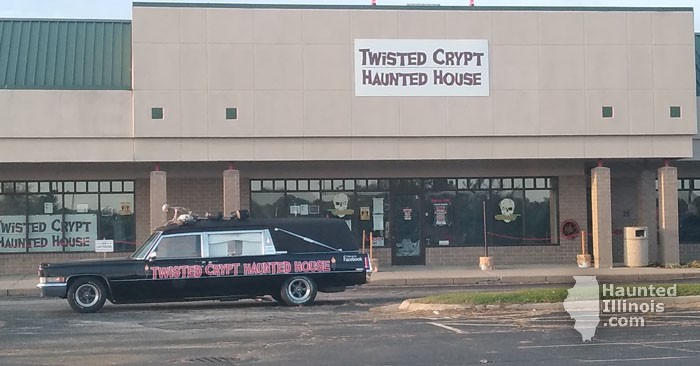 There are no signs posted on the main highway. GPS directed me to an old strip mall. They are located at the far end of it. There is a small white sign on the building with the name, a decorated hearse in front, and white and yellow strobe lights on top of the building.

A few masked characters were walking around outside. Inside, a projector played black and white short films. Before entering the actual haunt, you also meet "Boris" and his "Doll"- who are in a little shack scene.

They split you up in groups and hold you in each room for a couple of seconds (as the scene is being performed) to prevent you from bumping into other groups.

I'm not going to lie: when I first saw the location, I didn't think much of it. The small display sign and lack of detail in the front of the building gave me the impression this haunt was going to be another quick walk through; lacking in scare/ entertainment value. Boy, was I wrong.

Right before entering the building, patrons were "wanded" down with a metal detector to make sure no one was carrying any weapons. This was the first time I've ever experienced such a thing at a Haunted House, and it was nice to know that this haunt cared for everyone's safety. (In my personal opinion, more haunts should adopt this procedure.)

Upon entering the building, I found myself in a well detailed queue line- set up to look like an abandoned house, complete with concrete walls (about 4 ft. in height). There were no roaming actors here, but as mentioned earlier in the wait entertainment section, a portion of the queue line directed me into a creepy little shack where "Boris" and his "Doll" entertained a group of us for a short moment while in line.

The haunt itself started off in a small room, decorated to look like a study. A fireplace with bookshelves, candle lights and a large screen TV filled the room. The actor here (dressed like a butler) motioned for us to enter the room. Once we were all in the room, the lights flickered out and he disappeared. The TV screen popped on and a scientist/ doctor appeared. He gave us the rules, backstory, and proceeded to tell us that only one person in our group would be welcomed into the family, and the rest of the group would die. Once again the room went dark, suddenly the wall opened up, and the butler reappeared on the other side of the wall, motioning for us to exit the room.

We walked through the open wall, and were immediately lost in a closet full of clothes, pushing our way out and eventually into a kitchen. A crazy woman was preparing dinner, while her daughter sat at a table eating intestines. As we entered, the mother told her daughter to "make sure she fed her guests," whereupon the daughter brought us over to the fridge and showed us all the rotten food, blood, and guts sitting inside. She insisted we pick a piece of candy out of the guts, and as soon as we did, the mother went crazy and forced us out of her kitchen, through her spice cabinet.

Next, we came upon a run down, hillbilly themed, neon tattoo parlor where a female and male clown were fighting. They picked someone from our group (who they thought would "fit in the family") and ordered them to sit in a chair to be "tattooed." The "tattoo gun" was a neon highlighter, and they wrote the letters F-A-L-Y on the person's arm (which they proclaimed spelled the word FAMILY). They told us to take the piece of candy we received from the kitchen and hold onto it until we saw "Curly"- the mean one in the house. I'm honestly not sure if we ever ran into Curly though, so I was never able to give him my piece of candy.

As we continued through the house, we entered spark cages that misdirected us and lead us to a closed room with 3 doors we had to choose from; a father's room, where he picked which person from our group he wanted as "family"; an army tank room, where a tank girl type character made us line up against the wall to be executed; and eventually a chainsaw room, where an actor chased us out of the haunt with a chainsaw.

In conclusion, I was happily surprised by what this haunted house had to offer once inside. It was full of detail, hidden exits, and the makeup and costumes were all top notch and fit the themes very well! Multiple times I found myself wondering if I had somehow wandered into the movie 'House of 1000 Corpses.' This haunt combined old school scare with theatrical sets and detail, was very well put together, and contained lots of entertainment and customer interaction. The only thing I found slightly inconvenient was that the entrance and exit to the haunt were all through the same door- which caused me to have to wait to leave while other people entered. Besides that, I thoroughly enjoyed myself and I can definitely say I will be returning to see this show again in the future!

To find out more about this event, visit:
http://TwistedCrypt.com