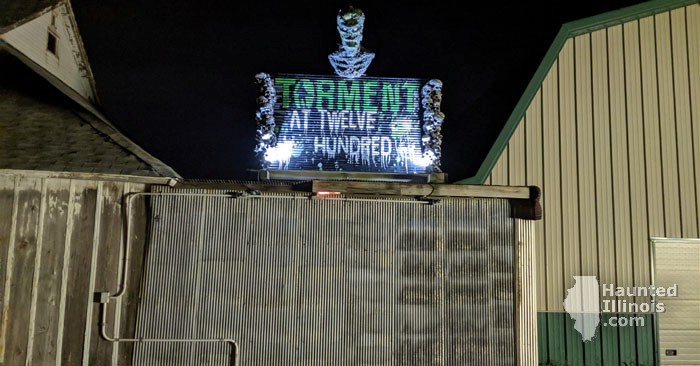 Torment at Twelve Hundred is located on a narrow road out in the country, and they had a man in a reflective vest directing traffic out near the road. There was a long path to the parking area, which had several parking attendants, as well.

There was not much for wait entertainment on the night that I was there. There was a demented bunny character scaring people by the ticket booth, but otherwise, I didn't see much.

Our group didn't run into anyone else until about half way into the show, which is a pretty significant amount of time. The actor in that space held us in his room for a couple minutes to re-establish a gap between our two groups.

Upon arrival, I headed to a lit shack with a sign for the attraction, and that is where I was read the rules. From there, I walked down an outdoor trail to another shack, where the ticket booth is located. Already, the spooky aesthetic of the show was making an appearance. There were distressed and aged lanterns in the ticket area, and I was sent in with another group (who was nice enough to invite me to join their group when they heard I had traveled to the haunt alone).

Eventually, I had to part ways with these kind people and go in with a smaller group. Honorable mention to the clown character splitting up groups and letting people in. We were led into a small log cabin, where a kind, but creepy, woman greeted us and told us about the land, and the eerie story of Johnny. We were directed to leave the cabin and head out into the unknown.

We went on a long walk down several paths, into actual mining tunnels, through dark mazes, and in and out of several buildings and sometimes school buses and trailers. All of the scenes, indoor and out, were intricately decorated and distressed. For example, we walked through what looked like an actual cave that had real boulders stacked on top of each other, and glowing green rocks on the ground. We had to duck down at one point and walk through actual sewer drains. We walked through a ton of different scenes; like a cafeteria, miners' office, and a medical area. Every scene that we walked through had appropriate sound effects and lighting. Some of the scenes also had very large and impressive props.

On top of the natural, eerie ambiance of the location and its gorgeous scenery, the actors did a wonderful job. Their make-up, masks, and costumes were put together very well. Some of the actors were very interactive and stayed in character very well. Johnny and Bubbles were awesome. The lady at the skin shop was great (I won't give the name of the shop away, but it is hysterical). The woman welcoming us across a path and into her cabin façade was good. The clown at the end pulled off a great finale to the show. I don't think I crossed paths with an actor that disappointed at all.

There is so much to see and take in here. The scenes, indoor and out are absolutely beautiful, in a macabre way. The natural secluded outdoor atmosphere mixed with convincing structural additions, and intricately detailed and distressed scenery, all come together to make an aesthetically pleasing and creepy experience. The actors added to the believability of the storyline and I was always leery about who was around the next turn. This haunted attraction is like nothing I've ever seen before, and I strongly encourage those brave enough to go see it for themselves. Just make sure you bring good walking shoes.


To find out more about this event, visit:
http://www.tormentwelve.com/