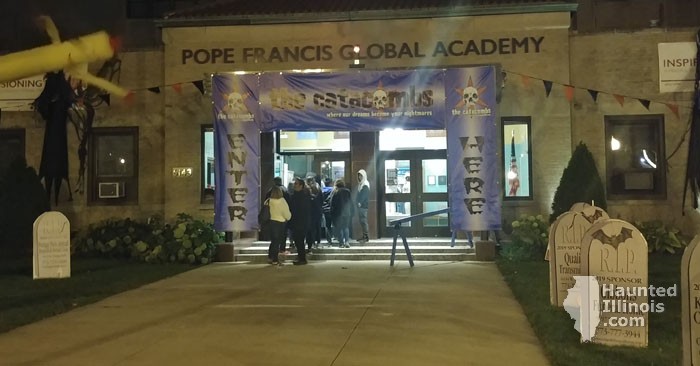 The haunt is in a school building on a busy street (Irving Park Road) and is very easily seen from the road. In addition, there are numerous signs in front of the haunt, as well as props and blow-up figures. Also, there is a large sign across the street in front of the parking lot for the haunt.

Wait entertainment consists of numerous live actors walking outside and amongst the crowd. Some of the regular actors include Michael Myers and a hooded cleric figure who walks silently with his prayer book. There are snacks available while waiting.

Medium-High depending on visitor age

Crowd control at the Catacombs can be an issue. First, the crowds get quite large and there are actually three waiting areas before you get into the haunt itself. This year, the first scene of the haunt featured a decontamination section where only a few people at a time could enter. This scene took a couple of minutes for each group and needed to be reset each time, which took extra time for each group of people entering the haunt. Our group wait a total of eight minutes from the time we entered the haunt before we actually got past this section, and the more people, the longer the wait. Also, at the end of the haunt visitors have to wait until they are able to move towards the exit as the entrance and exit are through the same doorway, so people exiting have to wait for groups entering to pass and the way to be clear. Overall, be prepared to wait for a long time to get into the haunt (two hours is not unusual) unless you purchase VIP. Even then there will be wait.

The Catacombs is a North Side of Chicago haunt institution, having been in operation for 40 years now. The haunt is held in the basement of St. Pascal's church and contains a mixture of some new elements and some haunt standards. The actors are mostly younger (grade school or early high school age), but the scares and performances do vary, from creepy silent characters that follow you, to jump scares, to in your face screaming and actors that surround people as they walk through scenes. This last type of scare was quite prevalent this year, with many actors in each scene that talked and screamed and basically closed in on visitors, not allowing them much personal space. Sometimes this type of acting can be really annoying, but if the actors vary their performances a bit and don't overdo it it can be entertaining. I was happy to see that this was the case this year, and the large amount of actors really added to the experience.

There were many detailed scenes here, from a catacomb section, to a radioactive zombie section, a butcher shop, a clown room, a cabin in the woods area, and other sections. In some areas even the ceilings were part of the dĂ®cor, which added to the feeling of being underground. A couple of standout scenes include a hall of mirrors and red laser lights with actors around every corner, as well as moving walls that disoriented visitors, along with a dark room where visitors wound up small area where they could hear people but not see them. When the lights came on visitors found themselves in a cage surrounded by actors trying to grab them. These actors eventually broke into the cage and moved towards visitors, who had nowhere to go until a hidden door opened. Very effective. However, one part of this scene that was a bit of a letdown was that in the dark area the music from Halloween was playing, but there was no appearance of Michael Myers. A great setup only to end on a disappointing note. A similar disappointment that happens every year occurs in the first scene, which is set in an actual boiler room. The Nightmare on Elm Street music plays, and the scene had simulated smoke and flames, but there is no Freddy Krueger. A disappointment each time for those who might expect him to show up.

However, overall The Catacombs is a very enjoyable haunt, with lots of actors and detailed scenes. On occasion the actors can be somewhat unenthusiastic, but not on the night we went through, and if this the norm for 2019 this haunt will provide good entertainment. One caveat is to get there early as crowds get really large, and there are several waiting areas which visitors cannot see until they enter them.


To find out more about this event, visit:
http://www.scarypopcorn.com